After each of my races, I write a little recap for my two young daughters. It’s a teaching moment of sorts. I’ve done this for the past two years but with eight races under my belt now, it’s getting increasingly difficult to find something original about each race. I mean, how many novel ways of expressing “Don’t give up” can you possibly manufacture? The race result, the competition and weather may all vary, but the message to my daughters doesn’t change: the pithy core of the teachable moment is never to give up.

In late summertime, I raced once again. The Klondike Road Relay was a completely new and unbelievably wonderful beast. The message for my daughters is different, too, but we’ll get to that.

I came about this race when my friend Kate Gustafson invited me to join her and 19 other women on a running adventure. Over dinner one night, she asked me casually if I would be interested in racing in the Yukon with a group of incredible women. Kate, a bunch of incredible women, a race in the Yukon? I was in.

It was only after I had agreed to come that I looked it up this Yukon race. It turned out, we would be running a 175-kilometer road relay starting in Skagway, Alaska and ending in Whitehorse, Yukon. It would take two teams of ten women and all night to complete. I gasped at that last detail. My one and only marathon happened in broad daylight. I never run much past noon. I don’t do late nights. Lack of sleep is my personal hell.

But I was already in and my ticket was nonrefundable. 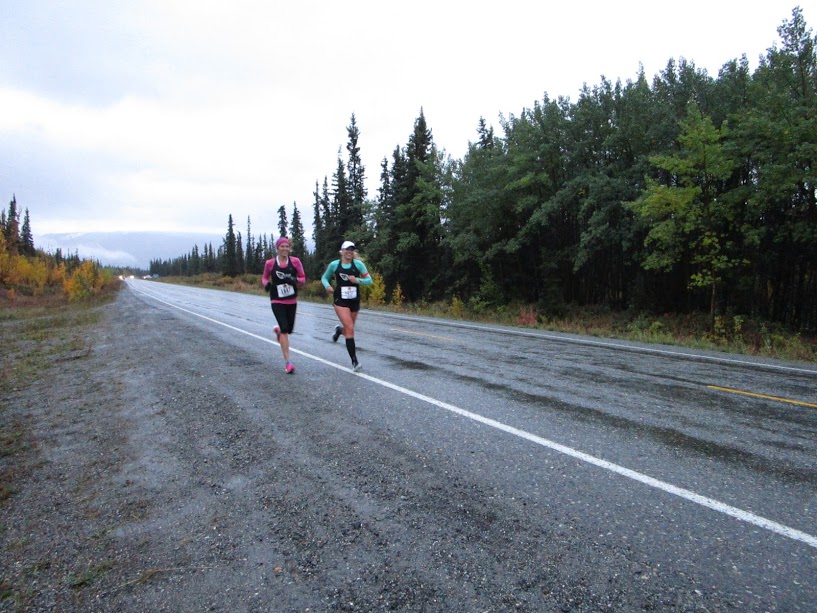 Katie Snowden, the lovely organizer of this adventure and a seasoned, high-performance runner based in Toronto, emailed out the sundry administrative details and paired up runners for each of the ten legs of the relay. Katie is part of the Angels, a high-performance Toronto running group. I was to be one of the few “honorary Angels” in attendance and would run the fourth leg with a woman named Kendal. On paper, each leg had its particular charms. The scenery ranged from azure coloured glacial lakes to beautiful woodlands covering rolling hills. They also has their challenges. Leg number two was only nine kilometers long. The catch? It was a relentless uphill drag. The sixth and longest leg wasn’t a distance you could attempt without any preparation– 25.6 kilometers is no joke. The website indicated a start time of 7:00 p.m. I would start at about 10:30 p.m.

“Whitehorse greeted me with a 5 degree Celsius temperatures, grey skies and rain drops that audibly thumped into large muddy puddles.”

I packed my bags and kissed my family goodbye. Vancouver bid me farewell with sunshine and a balmy breeze. I arrived in Whitehorse on race day morning, well-rested and without any jet lag to contend with. Whitehorse greeted me with a 5 degree Celsius temperatures, grey skies and rain drops that audibly thumped into large muddy puddles. Apprehensively, I scanned the forecast for the remainder of the day and night. It was only getting colder and rainier. 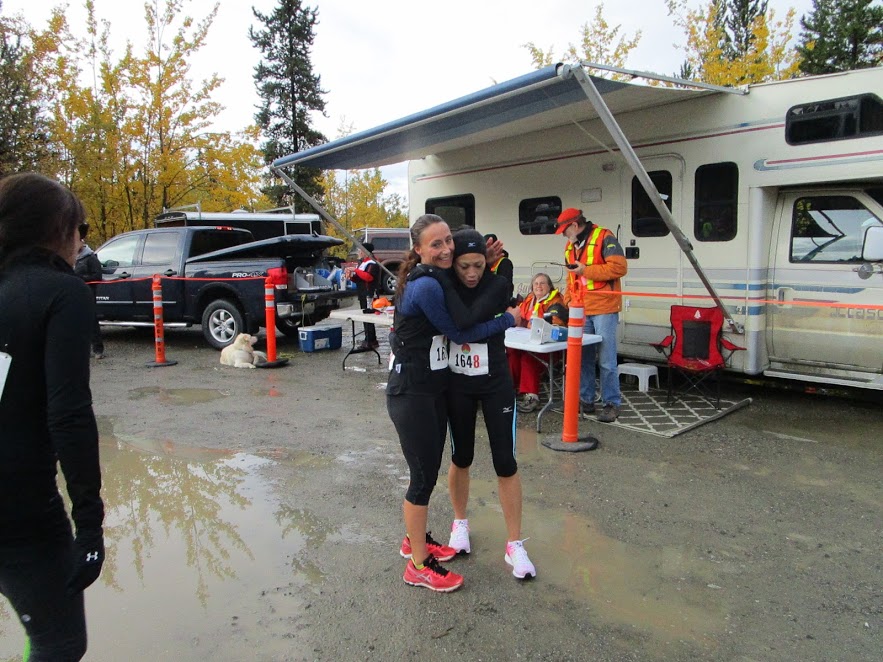 During the drive from Whitehorse to Skagway, I discovered that the women lived up to their description. We exchanged details about ourselves like where we lived, who we loved, what we did for a living, and of course, our PBs. We also shared lighthearted commentary about the weather hopefully changing and then, as time passed, a sense of dread that it wouldn’t. It bitterly cold and the rain showed signs not of stopping but of turning into snow.

The town of Skagway, a borough nestled into a glaciated valley at the head of the Taiya Inlet, elicited a few coos from my fellow passengers. From the car window, we saw quaint antique jewelry storefronts and Western-style saloons. We were sitting in the heated van keeping warm and resting up when we found out our race wouldn’t begin until 10:30 pm because of the staggered start. Unbelievably, 190 teams were running. The hours rolled by and then start time neared. It was pitch black by then and the town of Skagway seemed deserted, save for some incredibly enthusiastic race organizers and volunteers and a boombox at the start line, blaring pop tunes in the rain.

RELATED: Sunlight until midnight: Summer running in the Yukon 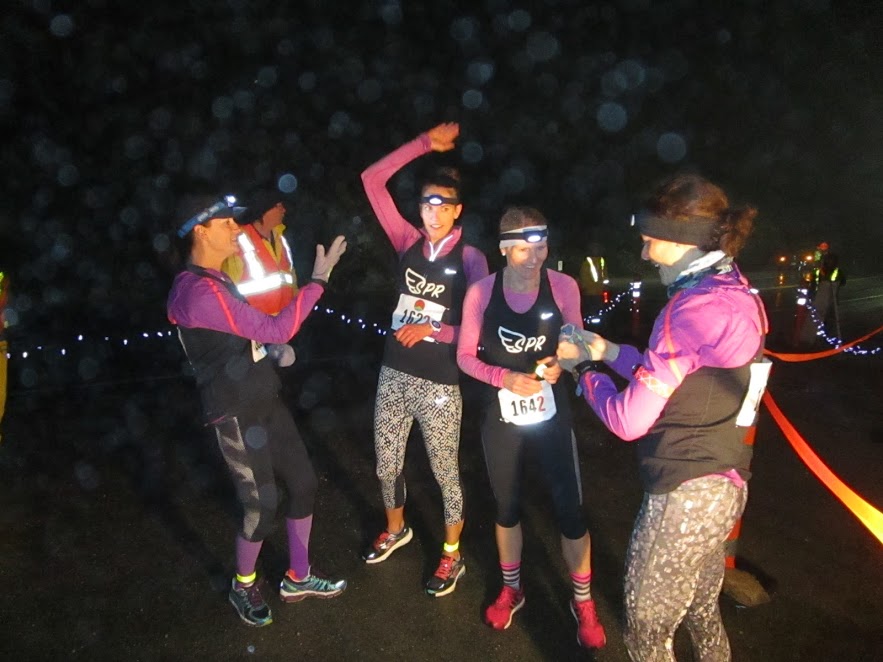 In no time, I was up. Kendal, a fellow “honorary Angel” and I began our leg as strangers. We took off side by side into the pitch black accompanied by nothing but our headlamps, the icy rain and an overwhelming sense of duty to complete our leg. We could have been running past the most beautiful glacial lakes or a hungry black bear licking his lips and we wouldn’t have known the difference. We saw nothing except the two meters ahead of us and heard nothing but our own voices. Our teammates stopped to cheer us on countless times. By the end of our 21-kilometer leg, we held hands as we approached the checkpoint. We had spent an incredible hour and a half running blindly together and we had become fast friends at 3:00 a.m. in the morning.

“I realized that I was experiencing one of the craziest, most intense undertakings of my life.”

Normally after I race my little heart out, I like to enjoy the luxuries of food, shower, and sleep. This was not to be. Soaking wet, we climbed back into the van (stretching be damned), swiftly changed our clothes and set out to cheer on the remaining racers. Knowing how important it was to me to see the smiling, familiar faces on the side of the road, I took my cheering duties seriously. Get out of the van at each checkpoint. Scream words of encouragement to the two women about to race. Take photos if your hands aren’t trembling too much. Applaud the two racers as they arrive in. Commend their valiant efforts. Take photos to prove that this actually happened. Cheer on the next team. Watch them disappear into obscurity. Jump back into the van. Thank modern science for heaters.

For each leg, we would drive three of four kilometers before parking the van and waiting a few minutes (during which I foolishly thought I’d get some rest) for the runners to approach. Then we’d climb into the cold darkness and wait again. We repeated this for 15 hours straight and I realized that I was experiencing one of the craziest, most intense undertakings of my life. 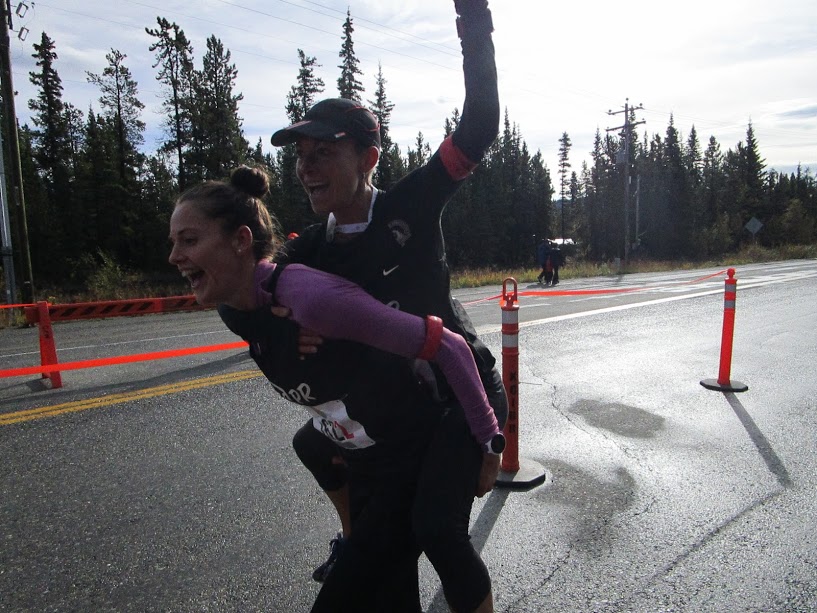 By leg seven, the sun was rising and the rain had subsided. While the elements were softening, we were now all running on little to no sleep and it was 6:00 a.m. in the morning. Races aren’t supposed to be easy. You do your best, you fight through the pain and you leave it all out there on the course. It can be a lonely experience. Though the cheering strangers and friends lift your spirits, as soon as you pass them, you’re in your head again. The Klondike Road Relay wasn’t easy, but it was the opposite of lonely. Our teams won the relay in the Women’s Team category, but the real win was meeting wonderful women, making connections and battling the difficult conditions presented by this northern landscape.