The biggest barrier many runners face when starting a strength training program is not knowing what they should be doing. Runner and physiotherapist Lindsay Scott sees many clients who have this problem, so she created a strength training blueprint for runners, to help her clients and others put together effective workouts that will help them become stronger, faster and more injury-resistant.

How to start strength training

“People appreciate that strength training is really valuable,” says Scott, “but they don’t really know where to start. It’s easier to just put their running shoes on and go running and not have to think about it.”

Scott says that when you look at the research, runners who strength train always come out on top — they’re faster, they’re more powerful and they don’t get injured as often. Naturally, runners, coaches and sports scientists want to dig deeper and figure out what is the absolute best way to strength train, but she says this often leads to “analysis paralysis.” Runners get so bogged down in the nitty-gritty details that they get overwhelmed and end up not doing anything at all. “We could go back and forth all day about what is the absolute best way to strength train as a runner,” says Scott, “but at the end of the day, the answer is do something.”

Scott wanted to put something together to encourage runners to add more load into their training in a different way and add variety into their strength training programs, while keeping it very simple and easy to follow, so she came up with her strength training blueprint for runners. Using the blueprint, runners can simply pull exercises from each of the seven sections to create an effective, time-efficient workout that will improve their running and decrease their risk for injuries.

Scott explains that the reason vertical force is important to runners is that it makes you a more efficient runner. “Think of your legs like springs,” she says. “As you’re running, you want to take advantage of that spring, and that’s where vertical force comes in.”

Without a good spring, you won’t have good energy return. This factor is what all of the new super shoes are focusing on — the Nike 4% are given that name because the shoes give your four per cent more energy return. Scott points out that research shows strength training can give you up to eight per cent more energy return. Strength training allows you to take better advantage of your spring (which means energy storage and release), for every step you take you don’t have to rely as much on creating force. This means you use less energy while you’re running so you can go farther and faster at a lower energy cost.

Horizontal force is about creating power. This power comes mainly from the muscles around your hips, which is why the exercises in this section mainly focus on hinging movements. When you combine stronger horizontal force with stronger vertical force, you’ll become a more efficient, powerful runner who can maintain faster speeds for longer times.

Exercises for your hamstrings

“The hamstrings take an immense amount of load, especially as you first hit the ground,” says Scott. Distance runners ask a lot of their hamstrings, so the goal when making them stronger is to have better control over the forces acting on them when your foot hits the ground. This will improve your running performance, but, most important, will prevent running injuries like tears (common in sprinters) and tendinopathies that occur in distance runners.

Exercises for your calves

Scott explains that the calf muscles take on much more load relative to their size than any other muscle when you’re running, so the force they’re up against is huge. As runners age, the force output in your calf muscles also decreases much more than any other muscle. Even runners in their late 30s can see a decrease of about 11 per cent compared to their younger counterparts. This will not only slow you down, but put you at greater risk for achilles tendon injuries.

Having poor postural strength often results in a runner being curled in or hunched forward. This restricts your ability to breathe and prevents you from having an efficient arm swing, which will slow you down. “So many of us spend all day at a computer and then go and run without “uncurling” ourselves,” she says, “so your capacity to get movement through your rib cage, and therefore expand your lungs to their full capacity is going to be really limited.”

Exercises for counter-rotation through your core

Scott explains that while we think of running as a solely forward motion, in reality, there are demands on our bodies from all directions. When you take a step and your left knee drives forward, your right arm also drives forward, and runners need to have a strong core to create a counter-rotation. And while you do need to be able to twist the spine, you need to be able to control that motion. In other words, core strength for runners is not about doing a ton of crunches or planks, but instead being able to control the rotation through your trunk.

Exercises for your hips

When looking at a runner’s gait pattern, Scott says one of the biggest things she looks for is a pelvic drop (your pelvis dropping down as you land on one foot). The more your pelvis drops to one side, the greater your risk for injuries. “The goal at the end of the day is to combine that core strength and hip strength together to prevent any of that drop,” she says. “It comes down to being strong and stable though your pelvis and your hips when you’re landing on one foot.”

What about glute strength?

Many runners think their form and injury issues are a result of weak glutes, but Scott explains glute strength alone doesn’t lead to changes in your running technique. She uses the example of someone who overstrides: “You can have the strongest glutes in the world, but if you can’t use them because you’re overstriding, it’s not going to matter,” she says. 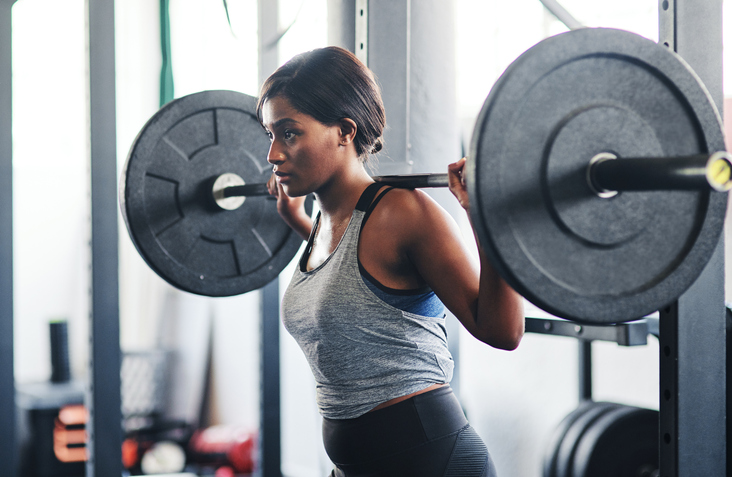 Why runners should lift heavy

How much do I need to strength train?

The good news is, Scott says an efficient strength workout for runners doesn’t have to take much more than 30 minutes. If you’re trying to improve your strength (whether you’re looking for performance gains or you’re recovering from an injury), she says you need to be training at least two, but ideally three, times per week. If you’re just trying to maintain your strength, one to two times is adequate.

If you have more questions or you’re looking for more information about running technique and strength training, check out Scott’s Instagram page, where she provides plenty of tips and information for runners about how they can improve their form and efficiency, reduce injuries and improve performance.