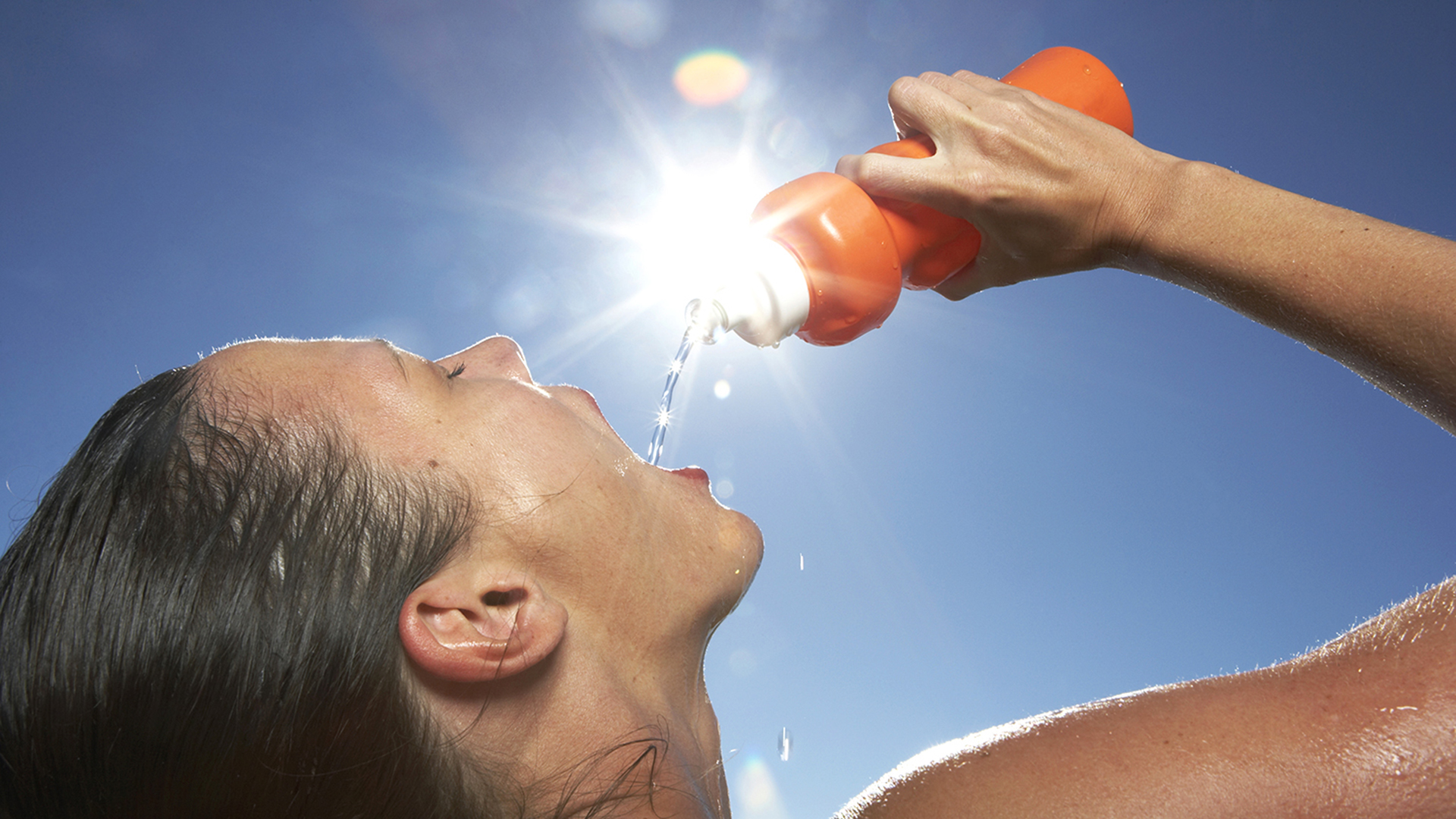 Most runners agree that staying hydrated out on the run is an important aspect of successful training. However, doing so can be particularly challenging during the hottest and most humid days of summer.

You’ve probably noticed that you’ll definitely sweat more on summer runs than on cooler fall or spring runs and so balancing that fluid loss with proper hydration is more important than ever. Dehydration, usually defined as a 2-4% decrease in body weight through water loss, can result in some pretty awful experiences during longer runs and races but occasionally occur even after shorter, easy runs. Part of the reason for this is that without enough water your blood volume decreases and your muscles don’t get as much oxygen as they need. This can lead to cramps, dizziness, nausea and several other unpleasant symptoms.

So how can you get it right?

Everyone sweats a bit differently–some less, some more–so it’s important to have a general idea of how much you need to hydrate for different lengths of time spent in the sun. If you get the chance, weigh yourself just before and again right after a typical run. If you lost more than a pound or two, you probably sweat a bit more than average so need to be particularly aware of keeping hydrated. Another useful tip is to pay attention to your urine. It should be a light yellow to clear in colour. The darker yellow it gets, the more dehydrated you’ve become and means you likely need to take on more fluids. That doesn’t however, mean you can down a litre of water and call it a day. Keeping adequately hydrated is a continuous and ongoing process. In general, you should be drinking about 15-20ml of water for each pound of body weight over the course of each day. For most people that will fall somewhere between 1.5-2L of water each day, but it will differ in the summer when you’ll lose more water to routine sweating and on runs depending on the heat.

You will also have to accept that some of your runs–especially long runs and workouts–are going to feel tougher in the heat. The hot weather can really tire you out, so try to embrace running at a slower pace and focus more on effort than speed. There’s no point in taking off at a pace you can’t sustain only to have to slog home feeling deflated.

As for pre- and post-run routines, you need to think about getting enough water in before a long run in the heat. Drink 300-500ml of water about two hours before your run. That should give it time to pass through your stomach and avoid cramps during prolonged activity. And as soon as you finish your run, you should also immediately begin to drink to replace the fluids you lost.

Some of your hydration should also be coming from sports drinks or something that contains electrolytes. Make sure you consume beverages with sodium and potassium and avoid the ones that simply contain sugar. A majority of the research done on electrolyte consumption has shown they increase performance, mainly by staving off dehydration and maintaining fluid balance. However, some are very strong and concentrated so if you seem to have trouble stomaching them, consider watering them down a bit.

As for planning your runs, consider if and when there are water fountains or a place to stop for a drink and plan to have access to water during set points. Knowing this can make the difference between a strong and successful finish to a run versus a slow, defeated one. And when it’s really hot and humid, you may also need to take in a bit of water as often as every 20 or 30 minutes so it may become necessary to carry your own fluids using handheld bottles, water belts or a hydration pack/vest. You could also choose to run a smaller loop course and stash a few bottles for convenient access every few kilometres.

All of this considered, over-hydrating can also be dangerous. This is often a problem with slower runners. Their heart rates may not get as high because of the slower pace and they tend to take more water breaks or carry more water with them, causing them to replenish more water than they sweat out. Over-hydration, or hyponatremia, is an electrolyte imbalance by dilution and can be as dangerous as being dehydrated. It’s another good reason to weigh yourself  once and awhile before and after runs, making sure you’re not taking in too much water.