A recent study in the Journal of Sports Sciences suggests that our running efficiency is greater when we don’t obsess about our form, and especially when we do not focus on our breathing–i.e. when we run more or less on autopilot

What is running efficiency, exactly? It refers to running well with the least effort possible,  as measured by the amount of oxygen we consume when running.

RELATED: How to improve your running economy: pay no attention to your form

The study, which involved having 12 run on a treadmill while focusing on their running form, their breathing, or a video, found that “consciously focusing on the running movement moves runners away from their optimized running pattern and leads to detriments in economy.”

New study finds that when you think about your running form, you get 2.6% less efficient than when you just watch the scenery; when you focus on your breathing, you get 4.2% less efficient. But there are some caveats worth considering. https://t.co/tyoNqPPfsA

The findings, which running journalist Alex Hutchinson summarized in a story for Outside, echo those of a similar study published by the same principal author in the same journal back in 2009, which Hutchinson also reported on for Canadian Running.

In both cases, runners were found to run most efficiently (i.e. they consumed less oxygen while maintaining a constant pace) when focused on their surroundings, rather than on what their body is doing.

The theory is that when we learn certain skills (such as running and breathing) extremely well through years of repetition, they become automatic, and focusing on them interferes with the automatic execution of the skill, making it less efficient.

However, as Hutchinson points out, the studies both involved relatively short runs, and there is a fair amount of evidence to suggest that endurance athletes do need to be aware of their form in the last few kilometres of a marathon, when it is more likely to suffer. 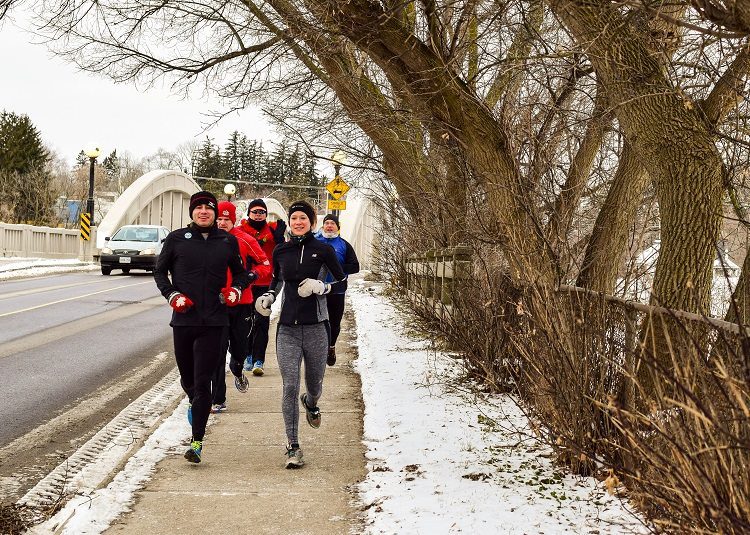 But, as he explains, there are ways of thinking about your form that are more helpful than others. For example, we know that trying to quicken your cadence and not arch your back too much can lead to better efficiency and faster times, whereas focusing on one specific part of your stride is unlikely to produce any real benefit (and may well make us less efficient on the road).

Also, if you’ve consciously decided to change your form, for example by switching from a heel strike to a midfoot strike in the belief that a midfoot strike will help mitigate injury, there will be some loss of efficiency (which you may be prepared to accept) during the time it takes for the new strike pattern to become automatic.

Where breathing is concerned, Hutchinson rightly points out that you’re better off to just let your mind wander, rather than trying to match a specific rhythm of inhalations and exhalations to your stride. The evidence is clear that the more you focus on your breathing, the slower your breathing becomes and the more oxygen you consume, i.e. the less efficient your running.