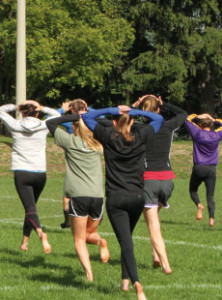 Want to run more efficiently? Peter Grinbergs, head coach of Wilfrid Laurier University’s cross-country team, has a suggestion: Put your hands on your head. Grinbergs’s Hands on Head (HOH) system, developed after 30 years of coaching, involves a series of drills that focuses on diagnosing and correcting stride inefficiencies. His athletes will follow up hard workouts with light strides, walking high knees and barefoot drills – all with their hands firmly placed on their heads.

“If you take [the arms and shoes] away, it forces the athletes to learn what their deficiencies are,” says Grinbergs, who has coached six Olympic athletes using variations of this system. “Through practice, a corrective process occurs,” he says, adding that arms and shoes can sometimes hide flaws in running form. During an HOH session, he tells athletes to keep their upper body still. Grinbergs says this helps to establish a balanced core, decreases unnecessary arm motion, and prevents the body from moving side-to-side or up and down while running. The HOH walking high knees helps to identify key issues, such as tight hamstrings or weak hip flexors, which shortens our stride.

While the HOH system is not scientifically proven, much of what Grinbergs has implemented draws parallels to what scientists in the field have discovered. For instance, a group of Australian researchers summarized the factors that we know contribute to running economy. One of the key areas is running kinematics, or how a runner moves. The research has shown that running economy improves when you keep your motion moving forward, as opposed to upward, while also keeping arm and core movements to a minimum. In other words, if you bounce less, stop swinging your arms so much, and stay centred, you will go faster without exerting any extra energy. These are all factors the HOH system is designed to identify and correct.

Researchers have also shown that flexibility plays a crucial role in running economy. A runner who is too flexible will lack the free, spring-like energy a stiff muscle and tendon can provide, making them less economical. By contrast, a number of studies have also shown that runners who lack flexibility will be equally inefficient. Once again, the HOH system seems to be in line with this research as it encourages runners to develop an appropriate stride length in a functional way. Although the HOH system may parallel what the science is showing, it isn’t a miracle drill. Grinbergs says the system is not a quick fix and doesn’t work for everybody. It’s also evident that these drills are by no means a replacement for other key components to your training. You still have to do your intervals, and there is no substitute for mileage and consistency.

Grinbergs’s method, when implemented as a supplement to consistent training, is paying off for many of his athletes. “Ever since I have been using HOH, my upper body movement has become much more efficient while running,” says Ben Flanagan, who represented Canada at the 2011 Youth World Championships. Flanagan’s 1500m PB has dropped by 16 seconds to 3:52.46 since implementing the HOH technique. The system is also great for beginners and recreational runners. After a hard workout, try taking your shoes off, putting your hands on your head, and walking with high knees for 50m and then running for 50m. Be sure to keep your upper body still. Follow this up with a 100m jog recovery and repeat 6 times. Stick to the plan for a few months, and you should see some positive changes in your stride.