If you’re one of those runners who knows you should do hill workouts, but somehow they just don’t seem to happen very often, consider channelling your inner Rocky and doing stairs instead. The benefits are similar, and for some reason, dashing up a long flight of stairs is just more fun than slogging up a hill. (Plus if you live in a flat area with few hills, you might have an easier time finding stairs to climb.) 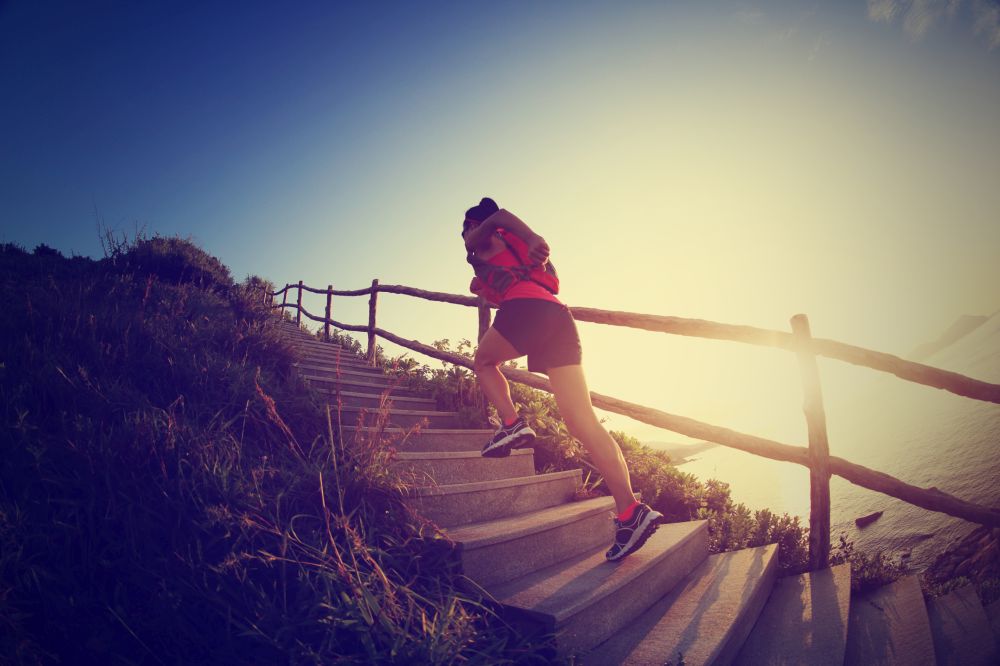 Like hill training, stair running gives you both a cardio and a strength workout. The motion of stair climbing mimics lunges and squats, which strengthen your quads and glutes, plus your calves, hamstrings and core will be engaged as well. All of these will benefit your running. It also counts as a bodyweight workout, since you’re defying gravity. (Stair climbing can be even more intense than hill training, since most stairs are steeper than most hills.)

A 2005 study found that even walking up and down stairs five days a week resulted in significant improvements in VO2 max (the amount of oxygen the body can use during exertion), as well as improving strength, power and endurance. 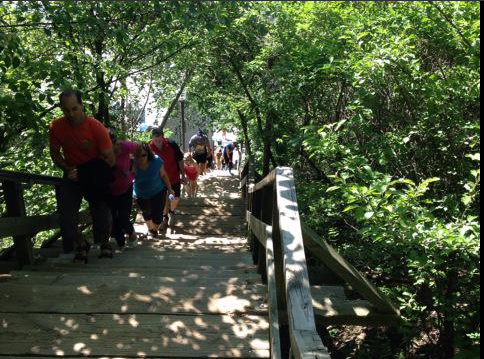 Always start with a 10-minute warmup before attacking stairs. If you’re prone to Achilles tendon issues, take it slow. The repeated midfoot striking, calf-snapping motion of stair running can cause overstretching.

Give your mind a break

Running stairs allows you to add variety to your workout by alternating running and walking, or alternating taking the steps one or two at a time. Flights of stairs with landings provide a brief second of recovery for both the mind and the body between efforts.

We would always opt for an outdoor workout over an indoor workout, but if weather prevents you from running stairs outdoors, a condo or office building stairwell can work (if you don’t mind the constant turning).

Toronto: Casa Loma (Davenport Ave. at Spadina Ave.), officially called the Baldwin Steps. Also Riverdale Park West, next to Riverdale Farm, at the east end of Carlton St. (There are also stairs from the footbridge down to the Lower Don Path.)

Ottawa: Many of the bridges over the Rideau Canal (e.g. at Bank Street and Bronson Ave.) have excellent stairs down to Colonel By Drive on one side and Queen Elizabeth Drive on the other. You could run the 7+K length of the canal, starting at the National Arts Centre, and do the stairs at each bridge. (There are paved paths on both sides of the canal.)

Montreal: Mount Royal, starting at the corner of Peel and Pine Streets. Four hundred wooden stairs (to give your body a slight break over concrete). If you go all the way to the top (no pressure), you’re rewarded with a spectacular view of the city.

We went up here everyday while staying in Montreal. Can’t wait to run #Quebeccity 🏃‍♀️ pic.twitter.com/R49TuNeyhE

Quebec City: The Cap-Blanc Stairway beside the Plains of Abraham. Almost 400 stairs to challenge the hardiest stair-runner.

Winnipeg: The Wayne Flemming Arena at the University of Manitoba (109 Sidney Smith Street), or the Canadian Museum for Human Rights, facing Waterfront Drive.

Vancouver: No shame if you’re not ready for the Grouse Grind. A great alternative is Queen Elizabeth Park at Cambie Street and W. 33rd Ave.