Help your children become lifelong runners by ensuring they don’t overdo it when they’re young.

I heard it on the playground. One seven-year-old asked another if she was going to run the 4.2k kids run at that weekend’s marathon. Her answer:  “Yeah. My dad’s making me run it.” I cringed.

I’ll be honest. I’m a runner. I want my kids to run. Most of us who run want  our kids to experience the same positives and find the same joy that we have  in the sport. And with school track clubs and youth-focussed events at road  races and trail runs, there are more opportunities than ever for kids to get  involved. But it’s complicated. When you see young children running a road  race, or even a marathon, it’s hard not to wonder: Are they doing it for the  right reasons? Are they having fun? And how much is too much?

The biggest fear for many parents is that too much running will injure  their kids. Will the repetitive pounding of running damage their vulnerable  growth plates or harm susceptible muscles, bones and joints? There’s not  much research on kids and running injuries, especially long term. One study  did find that running injuries had increased by 34 per cent between 1994 and  2007 in runners between the ages of six and 18 – but that’s likely a result of  increased participation and better access to sports medicine, says Dr. Michelle  McTimoney, a Halifax-based pediatrician and sports medicine specialist.

Still, many marathons have set age limits in recent years. You have to be  19 years old to run the full distance in Ottawa (they have separate youth  events), and at the Scotiabank Toronto Waterfront Marathon, you have to  be 18 to tackle the marathon and 16 for the half-marathon. In most kids,  McTimoney notes, growth plates have closed by the time they’re 15; after  that, their injury patterns tend to be the same as adults.

Even among kids who do tackle marathons, there’s no evidence that  their bodies can’t handle it. One recent study by Dr. William Roberts of  the University of Minnesota looked at 310 runners aged seven to 17 who  ran the Twin Cities Marathon over nearly three decades. Only four of those  runners needed any sort of medical help during or after the race, all for  minor problems that required nothing more than rest to fix – a better record  than the adult runners in the same race.

One area where kids are at a disadvantage is in dealing with hot conditions.  “Kids don’t deal with heat as well as adults do,” McTimoney cautions. “They  can’t cool as effectively, and can dehydrate faster.” That’s a good reason to be

A more subtle question is whether too much running  at a young age will lead to burnout, and less interest in  participating later on. It used to be that kids who were  interested in running would get involved with a local  track and field club which would steer them toward  shorter distances and a greater variety of events.  “[Track and field] used to be more prominent,” says  Cliff Matthews, a Halifax-based running coach. “Only  a few kids ran roads. These days, you have some young  kids running too long, too soon.”

Matthews favours a more balanced training  approach. Even his long-distance runners include  sprints and hurdle drills in their training. The same  is true for Norm Tinkham, a former member of the  national cross-country team and now a parent and  youth coach in Vancouver. As well as hurdle drills,  they play running games and do mini-relays in  training. “It helps them develop in different areas,”  Tinkham says, “and it’s fun.”

Of course, some kids really want to run long  distances. Tinkham himself started running in  Grade 7, and was racking up significant mileage  by the time he hit Grade 10 – a training strategy  that didn’t develop his neuromuscular strength, he  now believes. When his own 13-year-old daughter  wanted to run an 8k, he and his wife told her, “You  can do this, and it’s an accomplishment – but you’re  not doing a bunch of them.” In the end, Tinkham  says, “the drive has to come from the kid, but the  parent has to police it.”

That approach – holding back rather than pushing  forward – is not always how the sports-parent dynamic  plays out. Both Tinkham and Matthews have dealt with  many fantastic parents, but they’ve also encountered  the same all-too-familiar scenario. A new kid joins  the club, and turns out to have some talent and enthusiasm.  The kid has some initial success – and then  the parent steps in and starts pushing, pitting the  kid against older competitors, getting him or her to    race more frequently, and in subtle ways that may be almost invisible to the  parent, ratcheting up the pressure.  “So they stop enjoying,” Matthews says, “and you don’t see those kids  running in older age groups.” He recalls one runner with beautiful running  form, whose parents started having her do extra workouts beyond the club’s  training. As the load increased beyond what she could handle, her form deteriorated.  “It becomes too much, and they lose heart,” he says.”

The most important question may be not whether a kid is doing too much  running, but whether he or she is doing too little of other activities. Up to  the age of 12 or 13, children should be encouraged to sample different sports  (and different hobbies of all kinds). Even within running, don’t pigeonhole  too early. “Experiment and find out what kind of running he likes best,” says  Dr. Nick Holt, the director of the Child and Adolescent Sport and Activity  Lab at the University of Alberta (and a marathon and ultramarathon runner).  “Does she like running roads? Or trails?” That approach can help reduce  injury risk, McTimoney notes. “When kids have to choose one sport to focus  on year round, they tend to get more overuse injuries. They’re not getting the  protective effect of cross-training.”

Just as important, you’ll also increase the chances that they’ll still be  running 20, 30, or even 70 years down the road. Some kids may be eager to  enter races and compete, while others may simply enjoy getting outside for  runs. “Let’s be realistic: very few kids who start running are going to become  elite athletes,” Holt says. “Fire up their excitement for running by being a  good role model, then give them opportunities if they want to try it out.” So,  just how far should kids run? As far as they want to. Just make sure you’re  really listening to them. 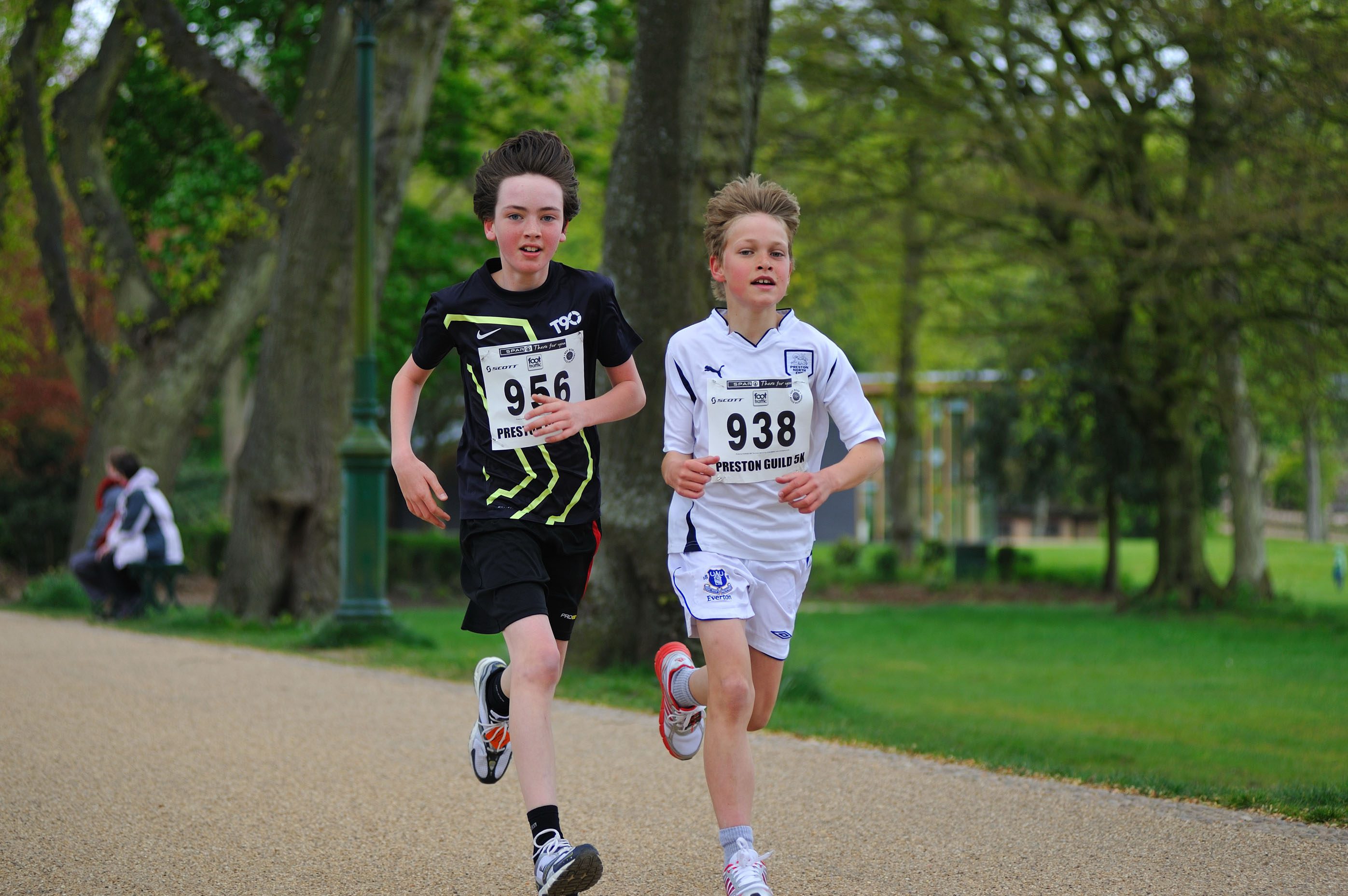