It’s difficult for those of us who live in a temperate climate to imagine just how hot it was in Doha during the World Championships, which wrapped yesterday. We read athletes exclaiming on social media about the shock of arriving to temperatures and humidity levels rarely seen in most parts of Canada. But upon the games’ conclusion yesterday, team physiologist Trent Stellingwerff tweeted a number of observations about the weather that challenged assumptions about the extreme conditions.

1/ I thought I would wait until Doha 2019 World Champs were over, before giving my thoughts on the hot weather – as having been here, working with athletes on the front line, gives me a unique perspective.

How hot was it?

“Were the conditions hot in Doha for the road races?” tweets Stellingwerff. “YES–YOU BET!”

Temperatures ranged from 28 C to 32 C on the roads, with humidity fluctuating between 50 and 90 per cent. Khalifa Stadium and the warmup track were air conditioned, but Stellingwerff reminded us that the stadium in Tokyo for the 2020 Olympics will not have AC. But he also pointed out that conditions were not that different from other events around the world, offering Ironman Hawaii and the Badwater Ultramarathon as examples. “In fact,” he says, “the challenging conditions provided a big opportunity to execute sport science to achieve relatively better results.”

RELATED: Takeaways from the 2019 World Championships

Lots of media looking to @lyndsay_tessier after her 9th place finish in the women’s marathon 🎤📹 pic.twitter.com/uEvBiuj9vQ

Stellingwerff considered four Olympic marathons in the past where heat was a factor, and in every case conditions were comparable to conditions in Doha, where it was 29 C with 50 per cent humidity during the men’s marathon on Saturday evening:

•Patience• Not in a top list of my strongest assets. But I’ve been working on it. Patience in training, trust in the process. It’s become a necessity after a couple years of Major Championship flops, chasing podiums and coming up woefully short. • This race was about conquering a distance that has, admittedly, kicked my ass the last few tries. I believed a top 8 was possible but I just wanted revenge on those pesky 50,000m. • So I did what I’ve been practicing. I was patient. I waited. Those in front began to falter and one by one I picked them off. Then at 45km I struck. I was in 4th, 2min from the athlete I’d eventually catch. I charged on, recording 5 of the 7 fastest 1km splits of anyone in the race. Just after 49km I moved into 3rd (this time staying on my feet) securing my first ever Worlds podium. So maybe this patience thing pays off. • I can’t thank the team around me enough. The progress we’ve made in the last year to get me healthy and fit couldn’t have happened without every single member being on the same page. Gerry, Devon, Marilou, Brent, Trent, Louise, Kirsten, the list goes on and on but each of you deserve your names on this medal! To everyone else who has supported me over the years, thank you so much! I can’t wait to celebrate this achievement with you. Finally, Nana, this one was for you! For 4 hours I imagined you yelling at your computer screen because they weren’t showing me and then losing your mind (well, what was left of it) when you saw me moving up close to the medal. You were with me every step of the way ❤️ ••• #Worldathleticschamps #doha2019 #athletics #olympics #canada #trackandfield #teamnb 📸 Andy Lyons/ IAAF

No relationship between heat conditions and non-finishers

Most interestingly, Stellingwerff plotted temperature and humidity conditions during the last seven World Championship men’s and women’s marathons and men’s 50K race walk events, alongside DNFs and DQs, and found no clear association–the lesson being that athletes drop out for various reasons, heat being only one. 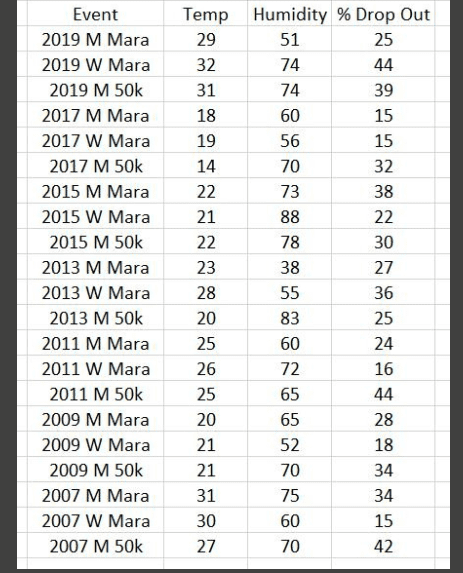 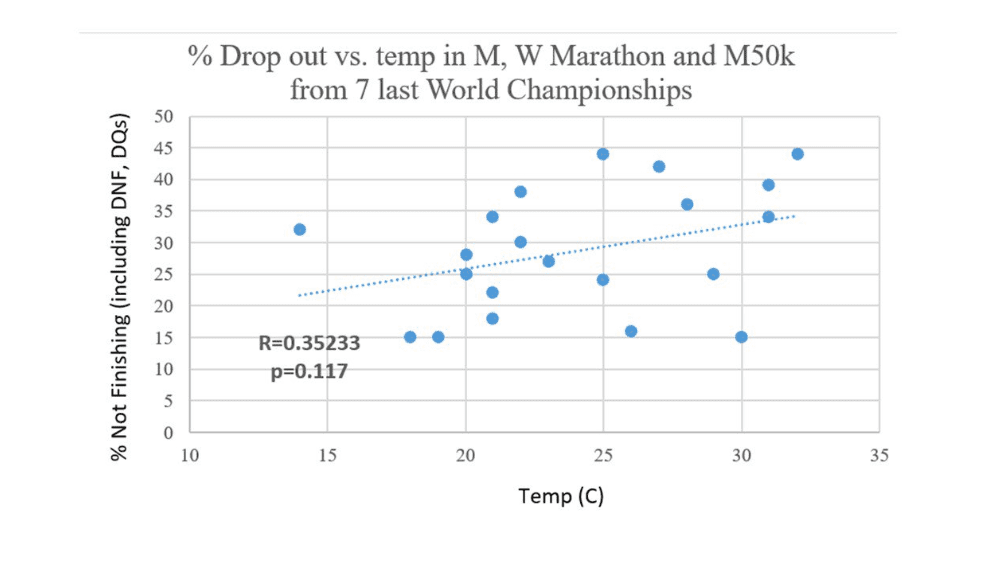 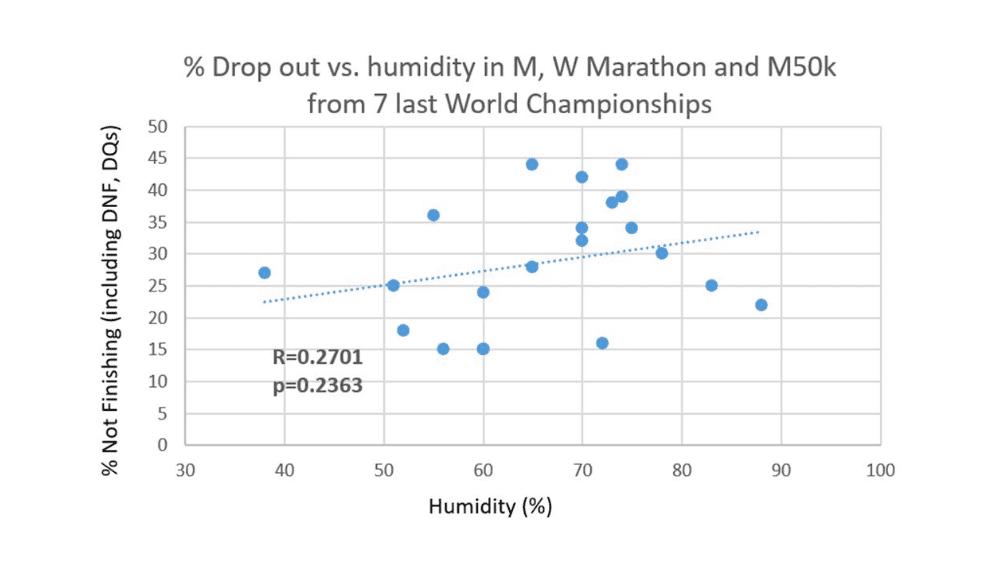 Stellingwerff says “I do feel the media has blown this out of proportion compared to previous championships and other global endurance events (as the percentage of non-finishers really aren’t that different) and I believe there were no reported heat strokes across the events here.” He also pointed out that everyone knew it was going to be hot, and both athletes and medical teams were well prepared. Similarly, we know that Tokyo will be hot, and can take similar precautions in training and during the Games.

The kid is hot tonight Woah, So hot tonight But where will he be tomorrow? -Loverboy- • Maybe didn’t need the long tights and rain jacket tonight. And I’ll be here tomorrow and the next few days!

The recipe for success in hot conditions

Stellingwerff cited the seven to 14 days of heat acclimation, “common-sense adjusted pacing” and the excellent cooling protocols for before, during and after races as being key to the success of the Team Canada athletes. In the case of Lyndsay Tessier, who started near the back of a field of 68 women marathoners but finished in the top 10, adjusting her pace in accordance with conditions meant going out at a full 15 to 20 seconds per kilometre slower than her goal race pace (as per her coach Steve Boyd’s suggestion)–a decision that’s difficult to believe, in the moment, will yield a good result. But it was exactly what kept her in the race and steadily moving up in position as so many others faltered. “You will not only survive, but thrive, in these conditions,” says Stellingwerff, even though you’ll be five to 15 per cent slower. (Hint: so will everyone else, if they don’t drop out.)

RELATED: How Lyndsay Tessier started near last and finished 9th in the world

I cannot believe it’s been a week since I stood on that start line for the @iaafdoha2019 women’s marathon. I mean I made the best of the bad situation – as you can see me being a complete goofball as the leaders went by. We don’t get to go control everything, but the things we can control, they are worth investing in. I could have gone into the team room and let the negative emotions get the better of me, instead I changed my clothes and got back out there to enjoy the action. It was the start of moving on for me. I don’t know what is next. Step 1, is loving running for the sake of loving running. In the worlds of @schwarzenegger ‘I’ll be back!’ #aimbeyond #marathongal #26miles

“Are you going to see a WR on the road endurance events in these conditions?” asks Stellingwerff. “Not a chance. But the elements make for very interesting challenges, and unique tactical situations! The tactics in that men’s 50K race walk and marathon were outstanding to watch unfold.

“In the end, global warming and summer global championships are only going to dictate that athletes/staff/federations had better understand how to use the challenges of extreme weather to their advantage.”