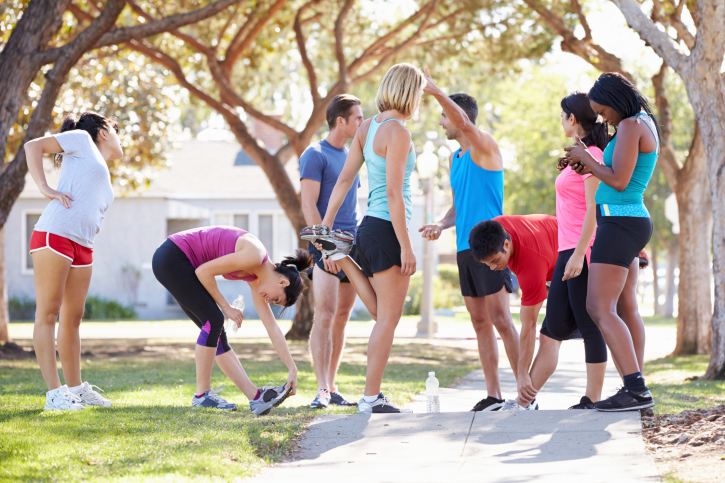 First day meeting up with the new club? Just like any other sport, running has its set of etiquette rules. There are unwritten rules to running as part of a pack and you probably want to abide by them if you plan on showing your face to this group of people in the future. If you’ve just found your dream club, keep yourself in check and don’t make any of these mistakes.

1. List all of your PBs and major races, giving every last detail

Nobody likes a bragger. Sure you’re excited to be among your type of people but if you start listing all of your accomplishments (especially if you haven’t asked your new friends about any of theirs) people will see you as a show off. That’s a bad first impression and you’ll be find yourself having to prove yourself later.

2. Race your new friends during a “relaxed” run

When the new person shows up and turns a relaxed run into a race, resentment among group members builds. Plus, you look like you don’t know what you’re doing. If you’re finding the pace is way off from what you’re used to, you might be better off finding a different group but right now, don’t ruin it for everyone else by turning this into a fast workout.

3. Cut off other runners while making your way to the front

Everyone has the right to their own personal space. Cutting off a fellow runner is a huge no-no. This is one sure way to get clubs members to not like you.

4. Complain about the pace

Don’t complain. Nobody likes whiner when running. First of all, it brings negativity into the group, second of all, you’re making everyone else feel bad about themselves and that’s just not good sportsmanship.

5. Tell everyone you know a better route

This is similar to number one. You are bragging and it also looks like you don’t appreciate the route that someone else has taken the time to map and measure. This is sort of like getting invited to dinner and saying you know a better soup recipe. Don’t do it.

6. Give running advice without being asked

So you’re running beside someone and you just know a simple fix that will help them with their form. Or you know that the person in front of you would do well running in a different type of shoe. Guess what? They didn’t ask for your opinion. You might think you’re just being helpful, but unwarranted advice can be seen as annoying or rude. Wait until the friendship forms before politely making a suggestion to help a buddy out.

7. Complain about the distance

To you, that 7K might have been a breeze. To another person though, that might have been a new milestone or accomplishment. If you finish a run and say something along the lines of “That’s it? I usually finish a full 12K,” you are making little of everyone else’s efforts. You might not get invited back.

Even if this new group seems to be a much better fit, don’t think comparing your old group to them is going to flatter anyone. They might just be wondering what you’re saying about them behind their back.

9. Bad mouth anyone in the racing scene

So you know another runner who has been rude to you or who has been a terrible loser in a race. Don’t tell anyone about this. You might find out that the person you are bad mouthing is the best friend of a group member. Or worse, they’re part of this group but sitting out today’s session!

10. Tell your grossest running story and give too much information

We all have a funny story about poop or snot. Let the relationships get a little closer before giving too much information about your bodily functions. Telling these kinds of stories too soon can be a little awkward for some people.