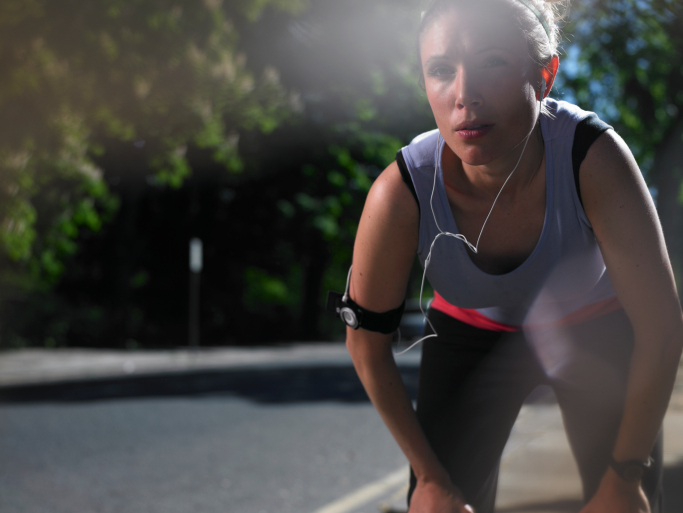 Breathing. It’s the first thing you learn how to do when you’re born and is a body function so natural that you forget you’re even doing it. For many runners, that’s the problem. When you forget about your breathing, it becomes unfocused and sloppy, impeding your performance and making runs uncomfortable. But when you control breathing just like you control pace and form, your running gets better automatically.

When you breathe in, the oxygen is sent to your working muscles and energy is produced. When your body is in motion and your muscles are working, the demand for oxygen-rich blood increases. Because of that, your respiratory system has to work harder to keep up with demand. Ever get chest pain when running? That could be because you’re using chest muscles to breathe — a lazy breathing method– and those muscles are getting fatigued trying to keep up with the oxygen flow your body needs.

So what’s the fix? Become a belly breather. Anyone who is an asthmatic has heard the warnings against shallow breathing. Now you are too. Stop the shallow breathing. Inhale in through the nose and out through the mouth drawing air so deep into your lungs that your chest and belly expand at the same time (you can practice this breathing before you head out so you’re not mastering it while running).

Control breathing to match your steps

The next thing to do is practice an inhale-exhale pattern that fits your steps. Inhale for three steps and exhale for two. The reason for this is that a lengthy inhale means the core is staying solid for longer. When you exhale, your core relaxes, so does stability and when you’re absorbing shock in that position, you increase chance of injury. When runners exhale as they touch down on a different foot, they distribute impact more evenly on both sides of the body. The three-to-two step breathing pattern can be adjusted to inhaling for two steps, exhaling for one if running quicker.

When you get a stitch

So you got a stitch. What’s the fix for this? The sharp pain below your rib cage in a cramp in the diaphragm. This can be easily fixed by breathing in sharply and exhaling with force. Keep this up for a few breaths and it should go away. Sloppy breathing brings on a stich so the more you focus, the less cramping you’ll get.