Gabriela Stafford is on fire. In the past three weeks, the 23-year-old has set two Canadian indoor records, gotten married, and signed with Nike.

The Toronto, Ont. native is obviously killing it on the track, but this doesn’t happen by accident. It’s one thing to get physically fit, it’s another thing to show that physical fitness on race day. Race day performance is almost entirely mental.

RELATED: Gabriela Stafford is moving across the world

Stafford used to get nervous before racing – like really nervous. She would frequently lose her lunch just before heading to the start line. But Stafford is a different runner now. She opened up about how she got her nerves in check and how she manages race day anxiety.

Stafford’s level of nervousness really depends on the race. “The more there is at stake or the more high-profile a race, the more I feel nervous. I was pretty relaxed before my 5,000m in Glasgow [where she broke the Canadian indoor 5,000m record] because it was essentially a time trial with my training partners. But before Boston [where she broke the Canadian indoor mile record], even though I felt very confident and excited to race, my body was buzzing and food wasn’t sitting well in my stomach. I try to consider nerves as bodily sensations instead of a psychological state. This helps make them easier to manage.”

RELATED: The confidence drug: the easiest way to improve performance

Stafford prepares for race day by using visualization and writing out a short race plan. “I usually write a little schedule for my race day, and a packing list so that I feel prepared. But after putting pen to paper, I don’t think about the race anymore and just relax.” As a track runner, you usually race in the late afternoon or evening, so there’s this anticipatory stage where you’re just waiting. Stafford finds this to be one of the hardest aspects of racing. Think of this time as a concentrated version of the taper jitters. To manage this, she likes to talk positively to herself and nap or meditate to calm herself down. 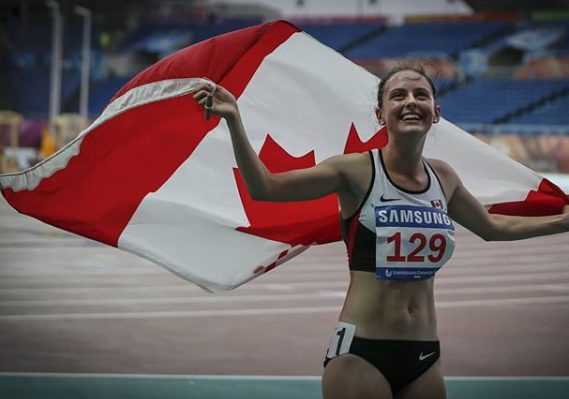 Once the gun goes, the confidence level and physical preparedness of a runner will show. “My confidence definitely ebbs and flows, and if it’s trending upwards, it means that things are working, but if it’s on a downward trajectory that’s a sign I have to take a look at myself on and off the track.” Stafford says that her first year of university was huge for her confidence levels. “I stopped doubting whether I would push myself to my limit in a race. Instead I grew the confidence to know that, with pretty good certainty, I would push myself to my limit. That was a huge step to gain that trust in myself.”

If you’ve got a big race on the horizon, consider treating a workout day like a race. Try preparing for a long run almost exactly how you would a marathon, except don’t run 42.2K. By treating big workouts like a dress rehearsal for the a big race, it’ll familiarize your body and mind with the process of race day and take most of the guess work out of your run.