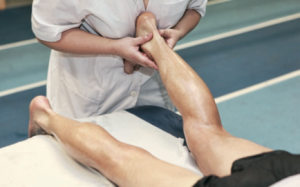 As a runner, my hips have always given me trouble. I’ve had teammates joke that, dissimilar to Shakira, my hips are, in fact, pathological liars. After a year of struggling with trading pain back and forth between my hips, despite a significant reduction in mileage and increased stretching and rolling, I landed in a sports chiropractor’s office discussing active release technique (ART).

What is active release technique?

ART is a massage technique based on the movement of soft tissue. When a muscle, ligament or tendon is overused or injured in some way, scar tissue is formed by the body to reinforce the injured area. Sounds good, right? Not if the scar tissue continues to build up and attach to the surrounding muscular structures. This can result in reduced mobility and muscle strength, while increasing pain in the area. art is designed to reduce scar tissue build-up by manipulating the muscle while applying pressure.

Dr. Alex Lee, a sports specialist chiropractor and certified active release technique practitioner at Velocity Sports Medicine and Rehabilitation, in Mississauga, Ont., puts connective tissue in layman’s terms, describing it as “like when you pick up a chicken and separate the wing, there is that white stuff covering it that stretches in between.” art treats the muscle’s fibres, their connective myofascial coverings and the fibres that occur in between muscles.

What sorts of injuries does it treat?

Though art can be used to treat a wide variety of problem areas, including IT band strains, hip flexor strains, shin splints and tendonitis. Most of these injuries are often blamed on increasing mileage too quickly, running in worn-out footwear or general overtraining. However, any runner who has put a fair number of Ks under their feet has most likely exposed their muscles to cumulative trauma due to the repetitive nature of the activity.

Speaking from personal experience, when I was treated with ART for hip flexor problems, my doctor included ART treatment of my IT band and gluteus muscles to ensure that all of the areas surrounding my problem area were also functioning efficiently.

Kurtis Marlow, a registered massage therapist based out of Kingston, Ont., has found art helpful in treating a host of common running injuries, including plantar fasciitis, shin splints, glute dysfunction and hip flexor tightness. “ART helps me to ‘turn on’ or activate muscles that are often inhibited in many runners,” says Marlow. “Glutes are a great example,” he points out. “Treating a weak and tight glute can help clear up a lot of injuries and dysfunctions that occur elsewhere in the lower body.”

Dr. Lee also finds the glutes to be a problem area for runners: “If the hips are weak, the knees drop in and a load falls to the glutes, which is why, for runners, I usually focus on combining art with strengthening exercises for problem areas to try and minimize the overload that causes the development of legions.”

Half jokingly, half seriously, Dr. Lee says there is an art to ART. “When I teach at the Canadian Memorial Chiropractic College, I tell my students that they have to apply enough pressure, in the right anatomical location to release a legion and couple it with effective dynamic movement and that this is something that, to a certain extent, comes from feel.” He advises finding an ART practitioner that is familiar with runners and that has several years of experience with the technique.

How do you know if ART is right for you?

Runners that have a certain area that is so tight that they can’t seem to stretch it out themselves, or that are experiencing the feeling of being “stuck,” as Dr. Lee calls it, may want to consider getting assessed by a professional.

There has been an upward trend in elite runners incorporating ART therapy as part of their injury prevention programs. Rather than a quick fix for injury, ART allows for increased muscular efficiency, which leaves runners less susceptible to injury.

How does ART differ from regular massage?

“ART is a dry technique,” says Marlow, “which means that no lotion is used.” The technique also incorporates movement into therapy, unlike regular static massage. According to Dr. Lee, this makes particular sense for athletes, as the only way to reach the root of issues is to apply treatment during the motions that are causing it. “Running is a sport that occurs in one plane, unlike other sports, like hockey or soccer for example, so I treat runners differently than I would treat other athletes” says Lee.

As for me, well, I think the pressure of ART is forcing some honesty out of my hips. But they’re also laying a lot of the blame on my glutes, so who knows what muscle group to believe.