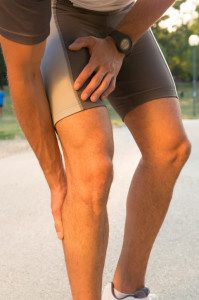 Contrary to popular belief, muscle cramps are not solely the result of dehydration and electrolyte loss, but are likely more a result of muscle overload and fatigue.

It is hard to do research on muscle cramps, as their arrival is involuntary and unpredictable. The dehydration and electrolyte loss theory is the most commonly known, but is also the least scientifically proven. In 2004, Dr. Timothy Noakes from the University of Cape Town studied the electrolyte levels of 43 ultramarathoners. Blood tests taken post-race showed no difference between the blood sodium levels and magnesium concentration between those who had and had not cramped during the competition.

If dehydration was the primary source of cramping, more people would be seizing up in hot tubs, saunas or even just on hot days. This isn’t to say that dehydration plays zero role in muscular cramps, but it is more likely a factor as an catalyst to muscle fatigue.

Most people cramp during longer runs or races, like the marathon, than do during shorter races like five and 10Ks. The muscle fatigue theory is supported by the fact that cramps tend to come on during the final Ks of endurance events.

There are some proven ways to ward off the dreaded cramp. The number one thing to do is to train for the long distances you’ll be racing. Muscles that are accustomed to going the distance are much less likely to mutiny towards the end of a race. It is also important to train for your proper pace. If you’ve trained solely at 5:15 minutes per kilometre and then start crushing 3:45s on race day, your muscles are going to retaliate.

Another thing you can do is incorporate plyometric training in your schedule to strengthen the endurance of the of the neural receptors which are believed to misfire during cramps. Keeping track of when you cramp and the factors surrounding it (i.e. what the weather conditions are like, what the course terrain was like, how you fuelled before the run) may allow you to identify your own body’s tendencies.