As runners, we’re hard on our feet. We asked a foot doc to answer four key questions about feet 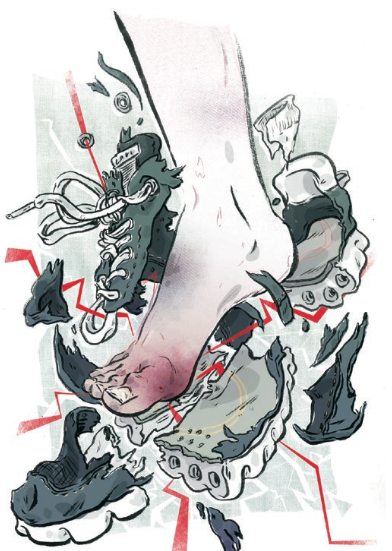 If you thought the catch-all term for “foot doctor” was podiatrist, you’re only kind of right.

“Podiatry is an American designation,” explains pedorthist Peter Charbonneau. “There are five major schools of podiatry in the States. They are trained in the management of all foot issues, dermatological as well as biomechanical and even minor surgical procedures.”

There are podiatrists still practicing in Canada, but if you visit one, chances are that they will be on the older side. “About 20 years ago, in Ontario, for example, the government decided to follow the British foot care model, which separates chiropody and pedorthics.”

RELATED: Your feet will thank you.

The dermatology of the foot, warts and fungal infections fall into the territory of chiropodists. Biomechanical issues of the foot are where a pedorthist should be consulted. Runners, generally speaking, face overuse injuries of the foot and are better off seeing a pedorthist.

Charbonneau himself is very oriented towards athletic patients, with an undergrad in kinesiology as well as a degree in athletic therapy. He knows runners, being runner himself (he describes himself as an “8–10k, three-times-a-week kind of guy”). We asked Charbonneau about some of the common foot topics of interest for runners: plantar fasciitis, bunions, orthotics and barefoot running.

What causes it?
I see plenty of runners with plantar fasciitis. It is easy to diagnose, but tricky to treat. Plantar fasciitis is an overuse condition, which means that you have to look at overall biomechanics to treat it. If you don’t address underlying biomechanical imbalances, the condition is likely to continue recurring despite the patient taking time off from running.

High arches and low arches are both susceptible to the condition and it is generally more common the higher the mileage the patient is engaging in.

It’s rare to find a person that’s completely biomechanically symmetrical. Almost all of us have a dominant hand and a dominant foot – one side of our body likes to be more in charge. I find the most efficient way to form a treatment plan is to analyze a runner from the hips down. This means looking at them when they’re static, mobile and doing a gait-cadence analysis.

I’m not a fan of saying that there’s a perfect formula for running, or that everyone should be running the exact same way, but improving mobility and stabilizing the core are aspects that most runners, injured on not, should work on.

What the heck are they?

Bunions are quite common, especially with female runners. Bunions occur when the foot is seeking additional stability. This may sound like a strange comparison, but think of what your hands would look like when you’re doing a handstand. Would you want your fingers together or spread out?

The wider the stance, the more you’re stabilized. So that’s what the bunion is trying to do for you. I’ve heard some people say that high heels are the cause of bunions, but that’s a complete fallacy. The reason that bunions are more common in females is because of the angle at which the hips are aligned. The wider hips of the female anatomy increased the angle at which the thigh bones are coming down to meet the knees.

RELATED: Am I wearing out worn-out running shoes?

Bunions aren’t dangerous, but if they’re giving a runner a lot of pain I would recommend that they visit a practitioner.

Who is a good candidate for orthotics?

Some people can function very well with poor biomechanics and some people can’t. It’s not fair, but that’s the way it is. If someone comes to me and they have tried all the usual conservative therapy options, such as modified training, strengthening weak areas of the body and undergoing phys- iotherapy, but is still really struggling with a recurring injury, that’s when we start to think about orthotics.

As a foot expert, what’s your take on barefoot running?

Barefoot running comes from track athletes running on the infield. What that does is get you to run in a more efficient way and be more aware of what you’re really feeling in terms of your gait. However, there’s only a small portion of the population that are able to tolerate this unsupported environment for higher mileage training.

Minimalist shoes have been around for a long time and they’ve always had a place in training. I’m definitely not saying that runners should get rid of their racing flats, but I would caution people who start doing long runs in them.

Regardless of whether you’re a runner or not, I’m a big fan of letting your feet experience different things. Having a few pairs of shoes to train in, doing barefoot strides on a soft surface and walking around barefoot at home are good ways to mix it up. As a whole, we spend way too much time in shoes and some of the smaller muscles in our feet essentially go to sleep when we do.

Editor’s note: This feature appeared in the November/December issue of Canadian Running.