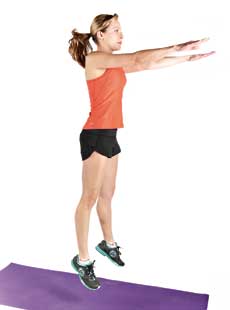 I get asked a lot about improving running form, and, I have to admit, I am often at a loss about what to say. Many people feel very strongly about this topic — some perhaps too strongly, in my opinion. The best way to improve your distance running performances is to improve your aerobic abilities. I may sound like a broken record on this point, but too often this essential element gets pushed aside in favour of the flavour of the week. The best part is, running more can help your form.

There are two schools of thought on running form, or, at least, two ways we can work to improve it. One is to work directly, by actively doing things differently during a run, and the other is to work indirectly — that is, by doing general work that will lead to a more efficient form. You might have guessed by now that I fall into the camp of trying indirect work first.

I guess the first question to ask is: why do we care about running form anyway? The short answer is that form is an indicator of our energy use, and to run faster race times, we want to be able to use less energy at greater speeds. So if we can figure out a way to move our bodies when we run in such a way that we use less energy, we’ll be able to run faster, or longer at the same speed. Of course, we still need to maintain and improve the fitness that allows us to run that speed.

Another reason often given for the need to improve running form is to avoid injury. The relationship is not that direct. The body is very good at being economical and moves in the best way possible given the current conditions. So, if you have a weakness in one area, the body will compensate for it by changing a movement pattern in another. Eventually, if the weak area is called upon to do work, there is a risk of injury because that area has not been well-used. Alternatively, the area that is compensating may end up over worked and injured.

The solution to this problem, in my mind, is to make sure that a runner is doing some strength work, especially in the problem areas of the hips and glutes. A common issue for runners is hip flexor pain, and this is often caused by glutes not firing and the front of the leg getting overloaded. Another problem is knee pain, and this is usually an issue of the outer part of the quad being more built up than the inner part, which causes tension in the iliotibial band, which translates to knee pain. A great exercise to solve both of these problems is the single-leg squat.

Notice that none of this advice involves telling you where to put your foot when you land or how to move your arms. There are three things that will help you have better running form and avoid injury and none of them involve video analysis or require expensive workshops.

Run more. The more you run, the more your body learns to adapt to the energy demands you are making of it. Your body will naturally find the movement pattern that best suits it. The idea that you if you run too much you’ll reinforce bad habits is faulty. If you don’t run enough, you can’t engrain good habits either. Plus, the trade off is too imbalanced: you need the aerobic development running gives you and you need the strength you’ll gain from spending time on your feet. Running is a pretty easy and natural movement, so don’t over-think it.

Another area we can learn from is sprinting. This is the second, indirect, way you can improve your running form.

Just like with increasing our running volume, if we increase our intensity, to the point where we are doing very short, fast sprints, we are increasing the energy we demand of our body. The body adapts to find the best way to meet those demands. We call upon it to use all the tools (i.e. muscles) at its disposal to get us from A to B as quickly as possible. Once we’ve built up the strength from doing some easy running, adding sprints gives the body a taste of the ideal form.

The third indirect way to help running form is by doing some form of jumps. There are a few different things that can be done here. Big, explosive, plyometric jumps will help, but it is important to build up to that. Sets of short, little hops are a good way to get into plyometrics. Check out this video from two of Canada’s top marathoners for a demonstration (go to 1:37 for the hops):

Once you’ve built up with this for a while, you can build to the more explosive “tuck jumps” that they talk about later in the video.

So, there you go. How do you fix your running form? Run more, relax, learn to sprint, and do some jumps. Pretty simple!