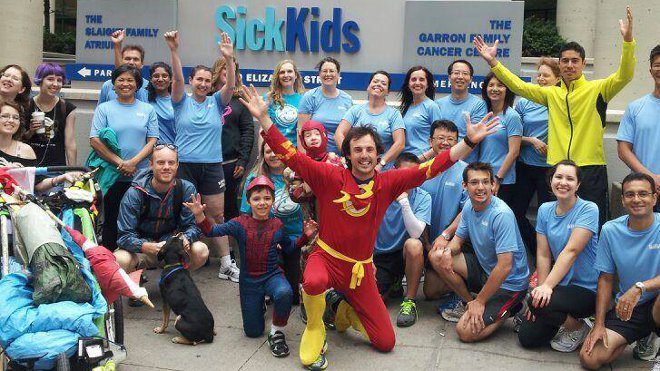 One year ago, Jamie McDonald finished the first unassisted run across Canada. He  raised over half of a million dollars for children’s hospitals in Canada, ran through the Rockie Mountains during January and spent Christmas with a family he had never met.

Last weekend, McDonald, who lives in Gloucester, England, was back in Toronto to speak at the Ontario Coaches Conference. We caught up with him about how he’s been doing.

Canadian Running: How much money did you end up raising in the end after your run across Canada?

Jamie McDonald: We raised just over $500,000. I didn’t realize how many people had been watching through Twitter and Facebook, and there was this absolute wave of fundraising towards the end and it carried on.

Canadian Running: You’re back in Canada for a bit. Did you miss Canada at all?

I feel like this is my home! Apart from the cold, I want to live here. I might have to find myself a Canadian girl or something.

Canadian Running: It’s been about a year since you finished running across the country. What have you been up to?

Jamie McDonald When I got back I actually felt very, very low. I was really almost depressed where I’d been chasing that final kind of hurdle, reaching the Pacific, for so long that when I did I kind of thought of it as this almost big, happy cake where I was going to be happy for the rest of my life and when I got there it wasn’t there. It made be quite sad for about a month but I managed to kind of get out of that.

Me and my cousin ended up fighting a few years ago dressed as Batman and Robin in Turkey and we had this idea for the Superhero Foundation and we said ‘Maybe someday we can start it,’ and actually this year we started it. We started out very first superhero a few months ago and it’s just an everyday guy who, at 36-years-old, he’s a welder who’d been fundraising for his daughter, Charlotte, with cerebral palsy for about a year and had really struggled. We went around there and, as he answered the door, he asked “Do you want a beer or do you want a coffee?” He’s a proper bloke, you know?

We ended up asking James “have you ever thought about a big challenge?” He said “You know what, I’ve fancied a challenge my whole life,” and so we worked out that if he ran up and down our local hill in Gloucester in the UK 75 times, that would be the equivalent of running up Mt. Everest and back down again. When we told him this he looked at us with absolute horror, but we managed to talk him around. A month later, no training, we provided all the expertistontario coaches confere around him – nutrition, a strength and conditioning coach – and he went for.

For 20 hours, he ran up and down this hill, non-stop, until he actually started crying his eyes out and said said his knee hurt so bad he couldn’t take another step. So I had to think on feet and wondered, “What other person has to to keep running on a buggered up knee?” I told him the story of Terry Fox and, as I told him this story – he’d never heard of Terry Fox before – he said “With just a stump? He ran all the way across Canada?” and I told him “Yes, with a stump, all the way across Canada.”

He then hobbled back up the hill and he went for 40 hours and after 40 hours he literally couldn’t move. He couldn’t keep food down. 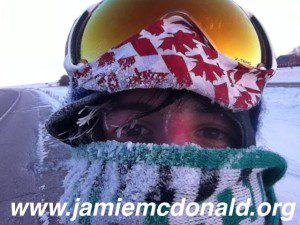 Canadian Running: What’s on the schedule in the next few months?

Once I finished the run I ended up kind of carrying on the with the speaking for fundraising. I had saved up my own money to do the adventures and as I was doing the speaking fundraisers that ran out, so I kind of went to my dad and said “Am I going to have to go back to teaching tennis?” and he said “Son, I think it looks like you’ve found what you love, so you need to just keep doing it.” And I kind of said “Cheers, dad,” and felt like I was in the exact same position but luckily a few weeks later I got a phone call from a big business guy and he said “Jamie, we would love for you to come in and do a motivational speaking session with our employees. I was really nervous because I had never really spoken at a big business before. I was panicking, thinking what I should wear – should I wear a suit? – what I should say, because I didn’t know anything about business. Anyways, he wanted to pay me and I had always done these speaking events for free but I thought maybe that was my chance.

So I went in, and I didn’t wear a suit, I wore a fair of flip flops and a pair of shorts with all these people in suits and ties. I started off by saying “you know what? I don’t know anything about your world or the people in,” and then I shared the story of my run across Canada because I want people to find belief within themselves and really take on something they never thought was achievable, which was what I had been doing for the last year.

This interview has been editing for length and clarity.