Kids, do not try this at home. On January 3, Western States course record-holder and 50-mile world record-holder Jim Walmsley of Flagstaff, Ariz. posted an insane double on Strava on his way to the U.S. Olympic Marathon Trials: a 6 x 1,600m workout at 11 a.m., and a 12 x 400m just before 4 p.m. 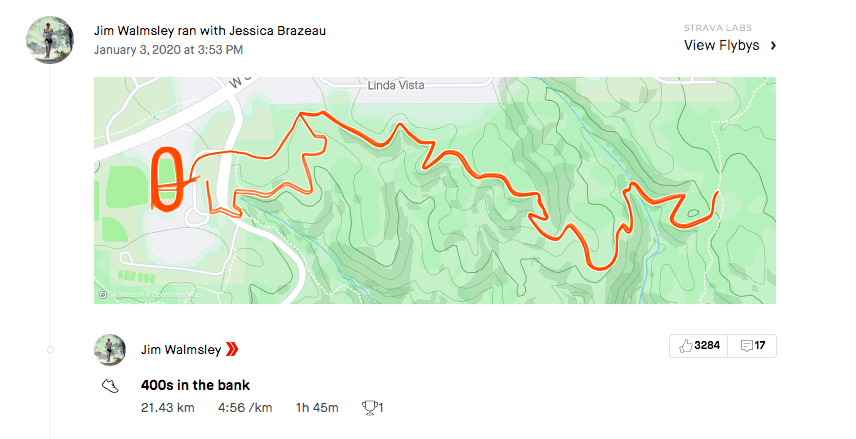 But Walmsley is no stranger to hard volume. We ran a similar story in mid-December about him logging a 243K (151 mile) training week. If he can stay healthy, he’ll command a lot of attention at the marathon trials, which take place in Atlanta on February 29.

There’s a mystique around Walmsley (who lives and trains in Flagstaff), born of his incredible speed on roads and trails alike and his ability to live in both worlds and excel at both disciplines.

A year ago, we looked at Walmsley’s training as the Houston Half-Marathon approached. At Houston he nailed a 1:04:00, exactly the time he needed (down to the second) to qualify for the marathon trials. He went on to win a 50-mile race in Hong Kong and take 43 seconds off the 50-mile world record before shattering his own course record at Western States. Later last year he won the World Mountain Running Long Distance Championship. Rumour has it Walmsley is planning to race the Comrades Marathon in South Africa on June 14.

The big question is whether, never having run a road marathon, he can dominate at the shorter distance against experienced marathoners like Scott Fauble, Jared Ward and Galen Rupp.

This is a little recap of some of the last workouts I did in November ahead of the World Mountain Running Champs as captured by @rabbitwolfcreative. The first half has become one of my favorite workouts. I call it Chevron Hill Circuit. It’s 5 Hill repeats with a mile jog out and a mile fast back. That’s one circuit, I usually do 3 total. The nearby hill I call Chevron Hill bc it has the gas station there on the corner. The Hill takes me about 45-50 seconds to get up at about 20% grade, with an easy jog down. I hit go on every 2 minutes. I usually get a Grade Adjusted Pace of about 5min/mile pace on the hills, but in reality, it’s more like 7:30min/mile pace. I jog up Hwy 180 a mile before doing a mile interval back to where I started, going with about a 30 foot decline over that mile. I do this circuit about two weeks out from some shorter trail races I’ve hopped into. This workout resonates with me bc it’s about getting it done and hitting what I need, changing my gears. It’s along a bunch of traffic, it isn’t pretty, and in this video, it was even trash pickup day with bins out on the streets I was constantly avoiding. It’s not going to be glamorous most of the time. You just need to get out there, put your head down, and put in the work. Second half is a little nicer Fire Road around Flagstaff that is more typical of some of the beautiful places I get to train around Flagstaff. This road is FR 151, where I call big country bc you’re more likely to see trail runners than road runners here because of the higher elevation and more vertical climbing over some slow going hills. As always, you can follow along my training on @strava. These activities were done on Nov 7th and Nov 10th of 2019. Here’s to grinding with just as much passion in 2020 #runwithpassion #timetofly

But if there’s one thing we’ve learned, it’s never to underestimate Jim Walmsley.