Reid Coolsaet knows how to rock a workout.

The two-time Olympian, who recently became a father, did a marathon progression run on Thursday and his time for the marathon equivalent (42.2K) would unofficially rank him in the top-15 in Canada, excluding any breaks. To be fair, the second fastest Canadian of all-time in the marathon is already in the rankings (second) thanks to his performance in Rio (2:14:58).

As per usual, Coolsaet recorded the workout and posted the details to his Strava account, which has more than 2,400 followers. Strava is one of the most popular social media platforms for athletes who choose to post their training details to their profile.

RELATED: Run a marathon with this pacing strategy and win a free pair of New Balances.

The run, titled “massively underprepared for the heat,” involved running 40K progressively, which means that he continually got faster throughout the run. That’s very Coolsaet-like as he is a fan of negative splitting races.

“Twenty-four degrees,” writes Coolsaet. “Felt like 28 C. Only brought 750 mL and one Endurance Tap [brand of maple syrup energy gel]. Ended up stopping at the fountain and drinking way too much.”

DST keeping an eye on @ericgillis and I during a long workout this morning. ? @jeremy_rae #crackingthewhip

As he mentions in the description, he did stop at a water fountain meaning that the entire 42.2K equivalent of a marathon was not done consecutively. The out-and-back route took him from Dundas, Ont., just outside of Hamilton, his current residence, through Jerseyville to the west before returning at the 20K mark and completing the return trip. He completed the 42.2K route in 2:28 but his cumulative time from start to finish was 2:43, which would rank him in the top-65 in Canada.

RELATED: Reid and Marie Coolsaet celebrate the birth of their first child.

According to Marathon Canada rankings, a marathon time of 2:28:21 would rank him as one of the top-15-ranked runners in Canada over the distance. As per the rankings, he would be ranked 11th but not all times are up to date as Christian Mercier is not included and he ran a 2:27 in Rimouski, Que. last weekend. 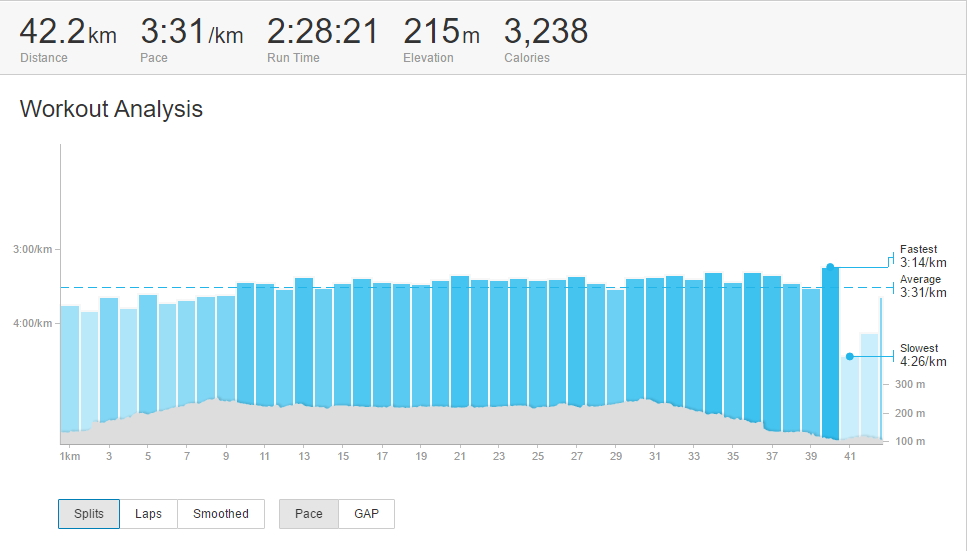 Coolsaet has not publicly announced what his next race will be. He competed at the Rio Olympics in mid-August and placed in the top-25, a strong result paired with fellow Canadian Eric Gillis’ 10th-place result. Gillis is shooting for the Canadian record at the Scotiabank Toronto Waterfront Marathon on Oct. 16.

A link to Coolsaet’s workout on Strava can be found here.