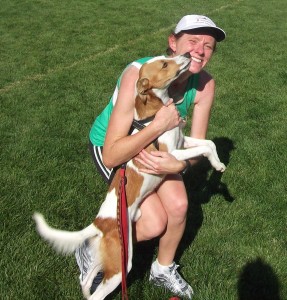 When a runner has a list of PBs that range from 10K to 100 miles, you know they’re an avid racer. Speaking to Adela Salt on the phone though, the ultramarathoner’s enthusiasm and upbeat personality reverberates through the line. When asked how long she’d been running, she quipped, “Oh thirty years or so. I’m an old lady!” An old lady who can run 100K in less than eight hours and is winning ultra trail races across Canada is an “old lady” most of us would aspire to be.

What’s Adela’s secret training weapon? Her whippet collie mix, Wilson, and the multitude of mountains in her new hometown of Calgary. Adela and her husband, originally from the UK, visited Calgary on holiday over a decade ago. They fell in love with the friendly people and mountain air and decided, when they could, they would move to Canada. Three and a half years ago, the couple made the move, along with their year-old puppy. 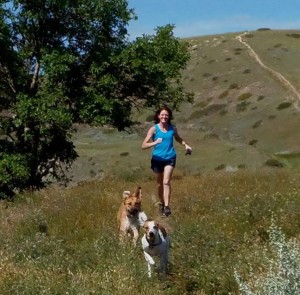 As soon as Wilson was old enough, Adela had him exploring the trails in their new home. Like his owner, Wilson’s enthusiasm is contagious. “He loves to socialize and has helped some of my friends overcome their fear of dogs by taking them for a run with him. He even joined me at the local running club which has helped to break the ice with people who are unsure about running or lacking confidence, and he’s really brought them out of their shells” Adela tells me.

She also mentioned that if she was still in the UK, her and Wilson would definitely compete in canicross. 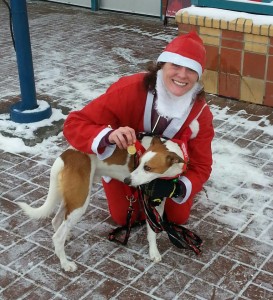 “It’s cross-country running, but you race with your dog. I actually think it would be really popular here in Canada, but I haven’t found anywhere that is offering it,” Adela explains.

She has found a way to race with Wilson on the roads though. They competed as a team in the Calgary Santa Run. “It made my year!” Adela laughs, “We started at the back so that we weren’t in anyone’s way and then the next thing I know, the race has started and he’s pulling me all the way to the front. I swear he was smiling and at the end, he seemed very proud of the medal we ended up winning!”

Adela’s next big race is the Transrockies Run, which involves 6,000 metres of elevation gain. “I’m doing lot’s of hill work to get ready,” she says.