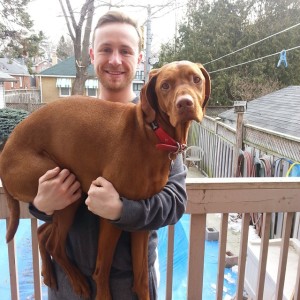 James Callahan of Toronto is unashamedly frank about why he started running: “My girlfriend at the time was into running and I didn’t want her to get faster than me. I had just quit smoking and was looking to turn my health around and running proved to be the way to do that.”

That was back in 2007. Callahan now runs regularly. “I used to be really recreational, just a guy out for a sweat, but my relationship with running has changed over time,” Callahan says.

One of the catalysts for that change of relationship was the introduction of a new running buddy, his four year old vizsla, named Mister Red. Callahan’s dog isn’t the first fleet-footed vizsla we’ve come across, as this breed is notably good at running. 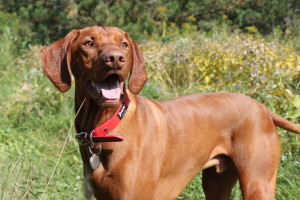 “Well, he was originally Red, and then we started calling him Mister Red as a nickname and it just sort of stuck,” Callahan says. “But he’s a motivator for me, he helps me stay on pace and has got me into that racing mindset.”

Running isn’t the only physical activity that Mister Red helps Callahan out with. “I use him as a weight, I’ll do squats holding him when we’re out on the trail,” Callahan explains. 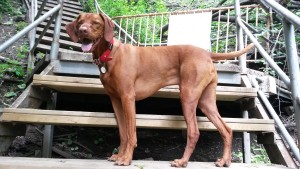 Mr. Red has had the occasional naughty moment though.

“One time we were running in the Don Valley and he saw a squirrel and took off on me. I was chasing after him and then I looked up at the Don Valley Parkway and just saw Red’s head. He ended up stopping traffic on the DVP. I jumped onto the highway to grab him and he was shaking like a leaf,” Callahan says.

Most of the time though, their five to 10K runs are moments of peace for both dog and runner.

“There’s nothing better than watching your dog rip ahead of you, having a great time. It honestly makes any run that much better.”