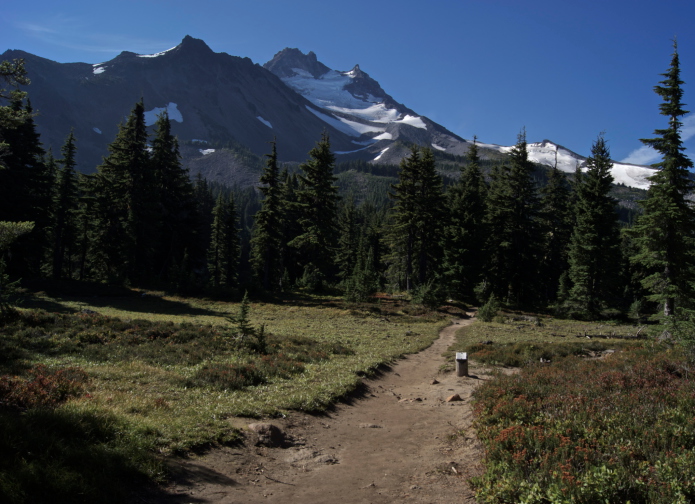 Spanning 4,265 kilometres along the pacific coast from Mexico to Canada, the Pacific Crest Trail (PCT) is one of North America’s most daunting (but beautiful) feats of endurance for hikers. The terrain in tough-going weaving through mountain ranges, the Sierra Nevada, and across desert and snowy grounds in California, Oregon, and Washington. Best-selling author Cheryl Strayed wrote her memoir Wild, a detailed account of her mid-1990’s solo trek on a 1,100-mile stretch of the PCT which was published in 2012 and has since sold 1.75 million copies. It was made into a movie starring Reese Witherspoon (see the trailer below) and is out in theatres now bringing more attention to the PCT for those who were unaware of its existence.

Few would take on hiking the trail. That’s what makes trail running the PCT all the more impressive. A bit about five runners who used their knowledge of running to take on the PCT:

Just this past summer, Joe McConaughy, 23, set the record for fastest supported trek across the PCT. The young man averaged 50 miles a day to raise money for families of cancer patients. He did a hike/run combo, running the flats and downhills and then hiking up uphill terrain. He started out on June 18 after graduating from Boston College. His time was 53 days, six hours and 37 minutes. Here’s what he ate:

At 32, Anderson set out on a solo journey to hike the entire trail. She did it in 2013 in 60 days and 17 minutes breaking two records set on the PCT: fastest woman to complete the distance and fastest self-supported hiker. She broke the latter record by nearly four full days finishing her journey on Aug. 7, 2013. Originally from Bellingham, Washington, Anderson had been an ultramarathon runner before taking her endurance skills to the PCT. During her trek, she wore out several pairs of trail runners and said later that her ultramarathoning experience prepared her mentally since she knew beforehand the distances her body was able to handle.

Garrett hiked during the exact same time as Anderson and has the second fastest time behind McConaughy. He also had a team to help him with his food and gear. Clad in trail runners, he completed the trail in 59 days and eight hours and 14 minutes. He was 30 at the time and an exercise physiology teacher and track and cross country coach from Santa Monica. He used running to prepare for this endurance challenge but he says his muscles still had some getting used to as running and hiking don’t entirely use the same muscle groups.

David Horton set out to run the PCT trail in 2005 and is says he was the first runner to do so in his short documentary The Runner. He has been a runner since 1977. For views of his time on the PCT, check out the video below.

In 2011, Sam Fox, 24, headed to the trail to raise money for Parkinson’s research. He was inspired to do this to support his mother, a Parkinson’s sufferer. He ran every day averaging over 40 miles each day, finishing in October, 2011 and was partnered with Brooks and Run While You Can. His trip was also turned into a documentary film.