Fresh off the success of The Book of Negroes, Canadian author Lawrence Hill has published another work of fiction that is sure to strike a chord with runners around the world. 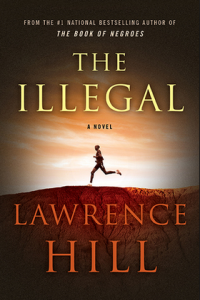 The Illegal follows the challenges of Keita Ali, a marathon runner illegally living in the fictitious country of Freedom State. It explores the world of political refugees, the fear and persecution they endure, and owes its realism to Hill’s personal experiences. His late sister Karen was married to a Sudanese refugee living in West Berlin during the 1980s.

“The guy she fell in love with was a political cartoonist for the wrong newspaper,” Hill says. “When there was a coup d’etat in Sudan he flled to Berlin. At the time, East Germany was happy to get rid of any Africans who arrived there, so they actually let them through the wall into West Berlin.

“He became one of those guys who draws your caricature on the streets in 15 seconds for pocket change,” said Hill. “That’s how he survived. I saw all these Sudanese ex-patriots trying to survive using any skill they had to stay alive.” That’s where the idea of a person who is designated as an illegal, who has to scrape together a living in desperate situations, started germinating for Hill.

Hill has been a runner since he was 12 years old, with a mile PB of 4:36. Though he dreamt of one day running in the Olympics he knew his talent was limited. Until recently he was running regularly but after suffering knee problems his doctor advised him to stop. Now he cycles several times a week but does manage to mix in one run of about 40 minutes.

“I used running not just for exercise but for emotional calm and focus,” the now 58-year-old Hamilton resident says. “It’s hard to finish a run and be in a bad mood. It’s really a great device for coping with stresses in life, so I desperately miss it. After becoming a runner, nothing compares. Even cycling, which is wonderful, doesn’t compare to the calm and beauty of running.”

For The Illegal, Hill solicited the advice of marathoner Reid Coolsaet and John Craig, formerly the managing director of Athletics Ontario, who ran 3:38 for 1,500m in 1981. They both read over a couple of drafts of the book.

“Even though I was a runner I don’t know what it looks like inside a pack of elites at the head of a marathon,” he explained. “Reid helped me with all sorts of details, including formulating the dialogue among elite runners.”

Hill is currently writing a screenplay for The Illegal, having sold the film rights to a Toronto-based company.