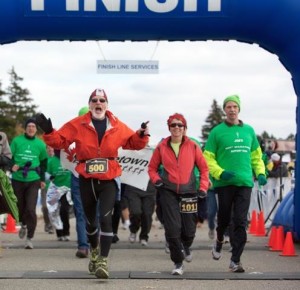 “I have an unbelievable father” are the first words that Brendan Cleary, founder of the Ontario Migraine Clinic, said to me over the phone.

While almost everyone thinks their own dad is pretty great, Brendan was apt in his selection of the word “unbelievable.” His father, Joe Cleary, has completed 537 marathons.

Born in Ireland in 1940, when Joe arrived in Canada he was a chain-smoker and not even remotely a runner. Brendan and his brother Sean, now the cross-country coach at the University of West Virginia, got into the running scene as teenagers and it was Joe’s job to get them there.

“I found myself at running venues a lot, so one day I just thought, ‘hey, maybe I’ll do a little jogging myself,'” Joe says, “I never meant it to turn into anything, I just did it to quit smoking.”

Joe stopped smoking just weeks before his first half-marathon at the age of 45. Brendan biked alongside him. “You were allowed to do that in those days,” both men pointed out to me. Father and son have run several races together, including ultras in the arctic and South Africa.

Running has taken Joe to some interesting places since that first race. He has run on every continent, in every state and every province and territory, and even one ran himself into a Molson Canadian commercial back in 1985. Most of the races that he has competed in are ultramarathons of varying distances, including his favourite, the Nunavut Midnight Sun Marathon, which took place each year in the arctic. When the race was in jeopardy, Joe stepped into an organizational role to help keep things going. Another well-known organizer was also named Joe, so they became known as Arctic Joe and Irish Joe, to keep things straight.

The name stuck and Irish Joe is now one of the most infamous ultra marathoners Canada has ever produced. You would never know it from talking to him. The 75 year old’s first words to me were, apologetically, “You know, I don’t think you’re going to get much of a story out of me, at best I’m a mediocre runner, frankly though I’m pretty slow.”

Joe suffers from chronic obstructive pulmonary disease, a result of smoking for so many years. He only has 52 per cent of his lung capacity remaining. Further proof that he’s tough as nails was supplied by Brendan, who told the story of a car accidentally reversing into his father during the local Run for the Toad race, breaking his fibula. Joe finished the race before heading to the hospital.

I think it’s easy to conclude that Brendan was right in his initial statement. ‘Irish Joe,’ is indeed, unbelievable and undoubtedly inspirational.