Building on earlier research showing peak braking force (PBF) to be the only significant kinetic predictor of injury, a new study by Vancouver physiotherapist and 2:33 marathoner Chris Napier and colleagues published in the Journal of Orthopaedic and Sports Physical Therapy shows that reducing stride length and increasing cadence (turnover) may be an effective way to reduce PBF and, by extension, the risk of injury.

Before the earlier study, Napier and his colleagues assumed that the vertical force with which each foot hits the ground would be a significant predictor of injury risk, but it wasn’t. Instead, PBF, or the degree to which you slow yourself down with each step, turned out to be the biggest risk, where aspects of gait are concerned.

The study followed 12 recreational women runners with high PBF as they completed an eight-session program to change the way they run, using real time biofeedback of braking forces. The women were trained to take shorter, more frequent steps to reduce their PBF. They were all also training for a half-marathon at the time. 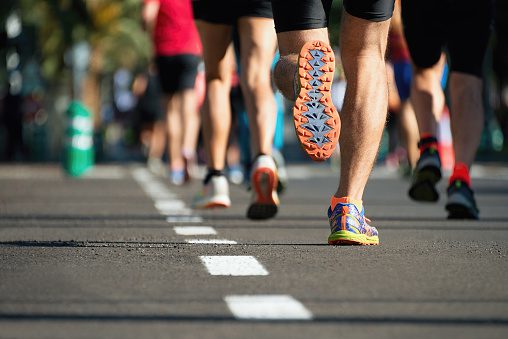 The results were promising: the women were able to increase their cadence by an average of seven per cent while shortening their steps by six per cent, leading to an average PBF reduction of 15 per cent. And by the end of the program, the women felt comfortable with the change to their gait pattern.

Many GPS’s measure cadence. So what’s an ideal cadence? There are studies that show a higher cadence may lead to faster times (180 steps per minute has been touted as ideal for speed, but most recreational runners would find it challenging to achieve such a high turnover). Though the study results are encouraging, Napier and his colleagues suggest more research is necessary to determine whether gait retraining would lead reliably to reduced rates of injury for recreational runners of both sexes.

“We’ve seen that real-time biofeedback has worked well in the past for motor learning, so I wasn’t surprised by the results,” says Napier. “What I’m really interested in now, though, is can we monitor and provide feedback outside of a lab setting. This has been done effectively for things like changing cadence (using a metronome app or Garmin watch, for instance), but we also have the ability now to monitor and provide feedback on impact variables using accelerometers.”

Napier is beginning a study looking at the relationship between impact, training-related variables and running-related injury, which he hopes will inform a future study on providing feedback to prevent injury.