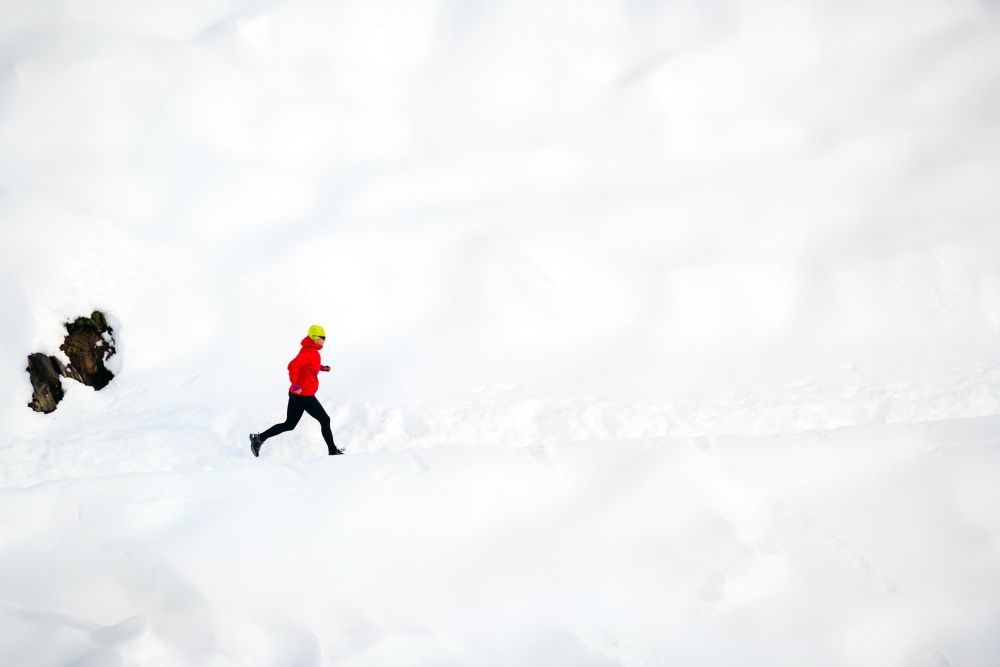 If you’re living in Canada that means you’re also surviving the brutal Canadian winters. If you’re a runner training in Canada, you’re logging the kilometres in at least four months of tough conditions. Sure, a fresh snowfall may leave the view outside the window looking like you’re living in a picturesque snow globe and while most of us appreciate the beauty of fluffy white snow clinging to the tops of evergreen trees, the blustery winds and ice-crusted streets get a lower score of approval from Canadians.

When late November and early December hit, we know we’re in for the long haul. At that time of year, we pull the socks up, invest in some favourite pieces of winter apparel, set new goals and revel in the novelty of freshly fallen snow. By mid-January though, that novelty wears off. It’s not uncommon for the fitness routine to fall apart and for the blues to settle in. Mid- to late- January is seen as the worst time of year for depression, blues and below average moods. In fact, this is the time for “Blue Monday” –  the day of the year which, as experts have agreed on, is seen as the worst for SAD and depression sufferers. That makes this week one of the hardest to get through.

So if the dark, cold days of winter have got you down, what’s the fix? Luckily, running and a proper fitness routines have proven to be a solution for many. Now, if you’re looking for little picker upper, we have a few running-related things you can work on.

Remember that New Year’s goal you set on December 31st? How is it going? These goals you set for the year are allowed to be edited and modified. Now that we’ve had time to settle into the year, you know if the goals need to be tweaked in order to make them more realistic. Doing this now will be a great source of motivation as you move forward through this tough time of year.

Many running rewards happen in the long term. You know that today’s long run combined with all the other training runs will make you stronger for your May race. In January though, it can be hard to get off the couch and head out on a bleak winter day when you won’t see the reward for another four months. Giving yourself an immediate reward for completing the run (like dinner at your favourite restaurant or 10 passes to that trendy new yoga studio) can be just the thing to put an end to the winter slump.

When winter is getting you down, setting a couple shorter term goals will mean seeing results sooner. That positive feedback works to encourage you to keep at it. As a result, the mood becomes a happier one. Say the long term goal is to be fit enough to complete a half-marathon in spring. A good short term goal then could be to see how many 10K runs you can complete this month. Or, if you’re looking to get your fitness back by April, keeping a tally of how many days you were active over the next three weeks will also motivate you to continue to put those running shoes on.

Indulge in the support of the running community

Runners who have been hit by the blues this month can always turn to the running community. Signing up for a social event or showing up to a group run is a push in the right direction. Getting out of the house goes a long way in boosting the mood. Don’t stay inside and dwell.

Plan to do one of your favourite activities on your rest day so that you will work hard for it all week. If the dark winter nights have caused the fitness regime to stagnate, a good picker-upper is knowing that if you put in the work from, say, Sunday to Thursday, you will enjoy Saturday afternoon’s lazy lounging all the more. Another good bonus: as you binge on Netflix, you won’t feel as though you should be running instead.

Understand that what you expect from yourself in winter has to be different than that of summer months. Rather than striving to execute the long run perfectly, understand that in winter, icy streets lead to slower paces and bone-chilling winds often lead to a run cut short. Combat the blues by just getting out for whatever distance and pace is manageable.