All too often, people reach a certain age and give up on their athletic pursuits, believing their competitive days are behind them. This age is different for everyone, but for many runners, it occurs when they are no longer hitting their PBs. Masters athletes, on the other hand, know how rewarding it can be to compete in your 40s, 50s and beyond. Tom Morris and Wayne Ell come from very different running backgrounds, but both have found fulfillment and community as masters athletes, and encourage others to do the same.

Morris started running in 1969 in the seventh grade after a doctor recommended running as a way to deal with his hyperactivity. The Saskatchewan native quickly realized he had a natural ability for the sport, and so he decided to see how far he could go with it. He ran cross-country and track at the University of Saskatchewan and says that making the varsity team as a freshman was one of the highlights of his running career. Today, the now 64-year-old competes in the masters category, and while he is not as fast as he once was, he can still get on the podium in his age group. In 2019, Morris was diagnosed with cancer and began chemotherapy that June. He admits that he has slowed down since beginning treatment, but he still gets out and runs regularly.

Unlike Morris, Ell considers himself a “late bloomer” as a runner. He did some running on the track team in high school, but didn’t have the same early success that Morris had. He continued to run once a week or so throughout adulthood, but never really considered himself a runner. It wasn’t until 2010 when depression- and anxiety-induced chest pain (as a result of a high-stress job) sent Ell to the hospital that he decided to make some changes. He and his doctor devised a plan to mend his depression with exercise, eventually leading him to the world of triathlons. By 2013, the now 63-year-old Calgary resident was doing an IronMan every summer.

“I guess I am a runner,” he jokes, “but most of the time in races I need the ‘warmup’ of a swim and bike before doing a half or full marathon.” 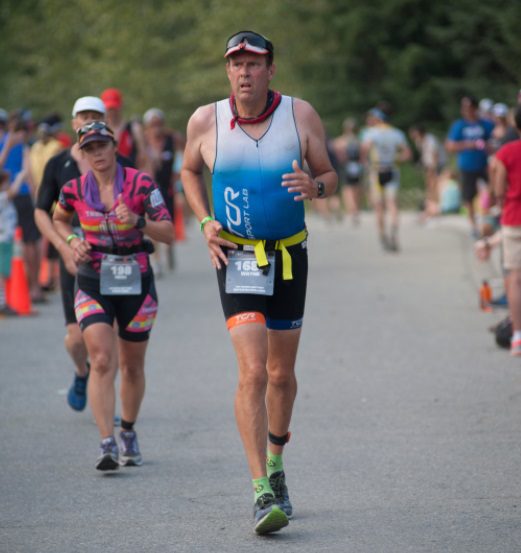 Over the years, both men have noticed changes in the world of running, most notably the emphasis on technology that has become so prevalent. When Morris and Ell first started in the sport, Garmins, Strava and other devices didn’t exist, which Morris points out was great for learning to run according to feel, something that he believes is generally missing now. Both agree, though, that there’s one thing that hasn’t changed: the community.

“There are really nice groups of people out there that anyone can join up with if they can find the courage to take that first step and run along with them,” says Ell. “Everything is better with a group.”

Morris and Ell also have advice for older athletes who are considering competing as a masters runner:

“Go for it,” says Morris. “The masters community is great, you won’t regret it.”

“Do not be intimidated,” says Ell. “Anyone can do these distances, if I can anyone can. It’s just baby steps to get to that level.”

Ell also endorses getting a good coach, being a part of a team and, of course, having a good physiotherapist on speed-dial.

“In masters, you need a good physio that knows your body and how to keep your old wagon on the road.”

RELATED: 7 keys to success as a masters athlete