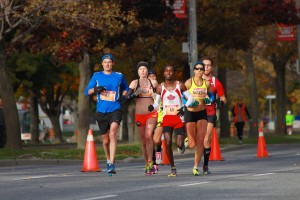 From elite marathons, to regional road races, more often than not one sees runners in clumps. Whether that is the elite group flying by or a cluster around a four hour marathon pace bunny, the science has shown that this is a good race strategy to achieve desired results.

A new study published in the Journal of Sports Sciences has analyzed the split times of elite runners from the six IAAF World Half Marathon Championships between 2007-2014 and discovered that runners who ran in a pack slowed the least over the course of the race. The next most successful in maintaining pace were runners who ran in “nomadic packs,” defined as running in a pack for each of the four 5K splits considered, but not with the same runners continually. 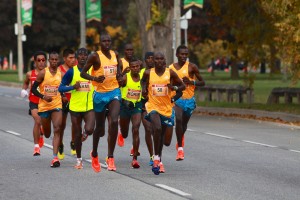 “short-lived pack” (i.e. running the first 5K with a group that you know you can’t keep up with) and then running the rest of the race alone is not an effective race strategy. A pace group is only effective if you’re willing to be realistic about your goals in relation to your fitness.

The study showed that those who ran in a pack were able to speed up the most at the finish, which makes a lot of sense to anyone who has ever sprinted to the finish of a race—it feels a lot more urgent when you’re racing someone versus when you’re by yourself.