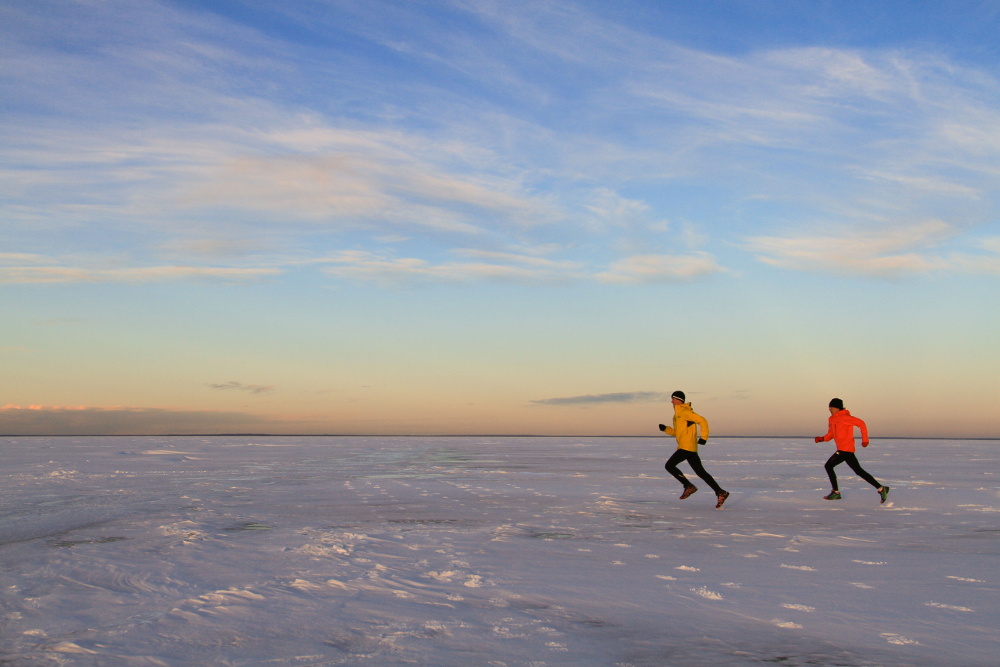 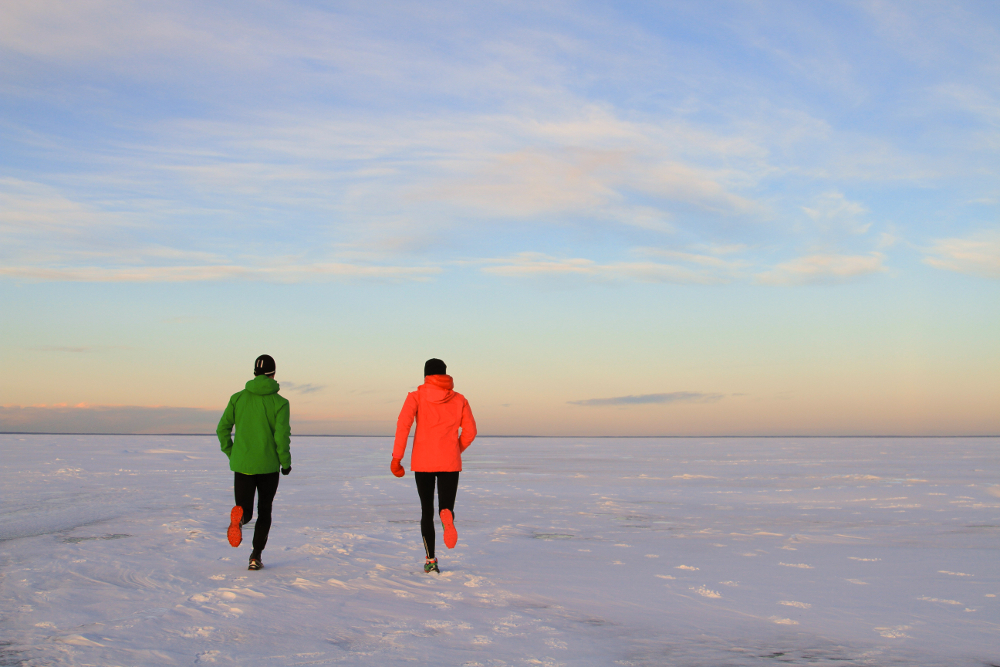 Dry run on Cold Lake before Sunday's long run. The far side of the lake can be seen on the horizon. 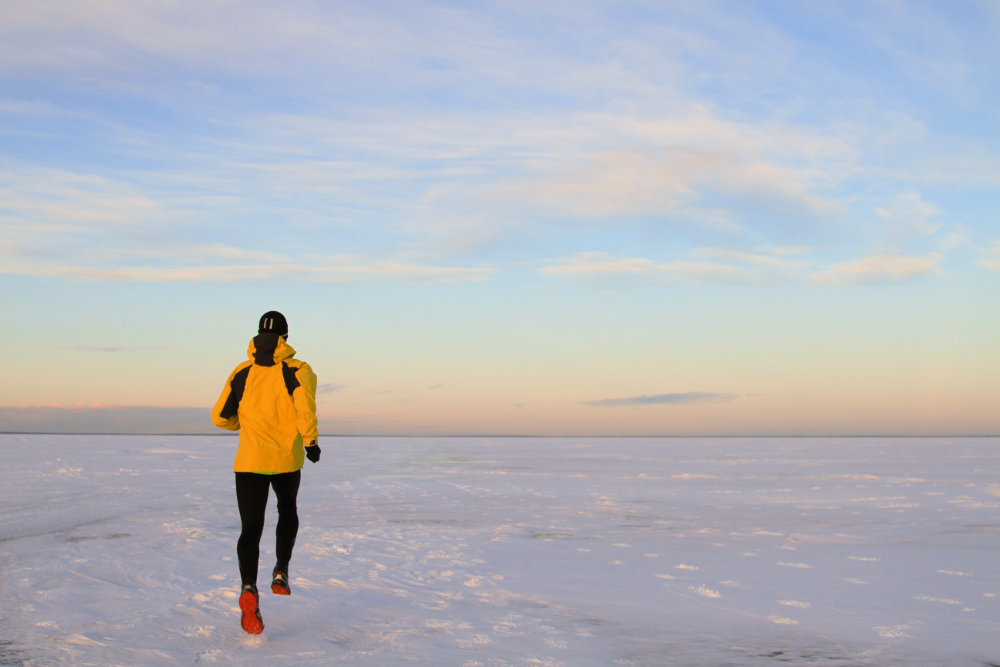 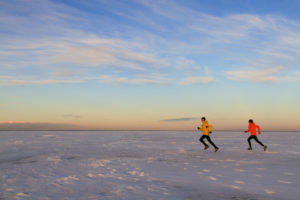 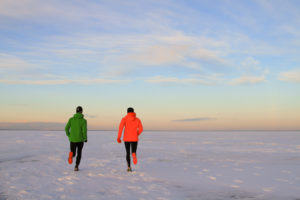 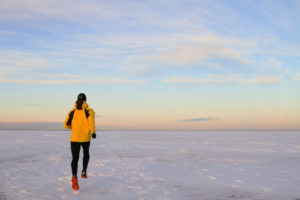 Winter running adventures don’t get much more Canadian than traversing a frozen lake.

For those living in northeastern Alberta where new run routes are hard to come by, sometimes creativity is the name of the game. Running on water may not be the first option to come to mind.

On Jan. 15, the Setlacks embarked on a long run that would take them across Cold Lake, which is divided between Alberta and Saskatchewan.

Matt, an aerospace engineer with the Royal Canadian Air Force and national team member at the 2016 World Mountain Running Championships, scouted out a potential route on Saturday with his wife Emily, Canadian half-marathon champion and primary school teacher, and a friend before the big run Sunday. Cold Lake is approximately 25K across, one-way.

The Setlacks have skied across the lake in the past but this time around there was little snow and ice conditions were smooth. Matt, who wore Salomon Snowcross CS as his footwear of choice on the Sunday run, also cross-country skied 28K on Cold Lake on Jan. 12 in preparation. Temperatures were 0 C on Sunday, much warmer than the -35 C conditions the area experienced in the previous days and weeks. (He run commutes and has experienced lows as cold as -45 C.)

Beautiful day to run on water with Dominic and @MattSetlack https://t.co/PWv2xpDGyJ It's a big lake… pic.twitter.com/6D6p6RvWUn

“There is potential for this to be a very dangerous journey and it definitely is not something to take lightly,” he says. To be safe, Matt brought a second kit of gear, polarized glacier glasses, food, a cellphone, and sharpened tent stakes tied together with a string and draped over his neck in the event that he fell in. All of the gear was carried in a backpack. “You must respect the distance and be prepared to turn around if the conditions get bad,” he adds. 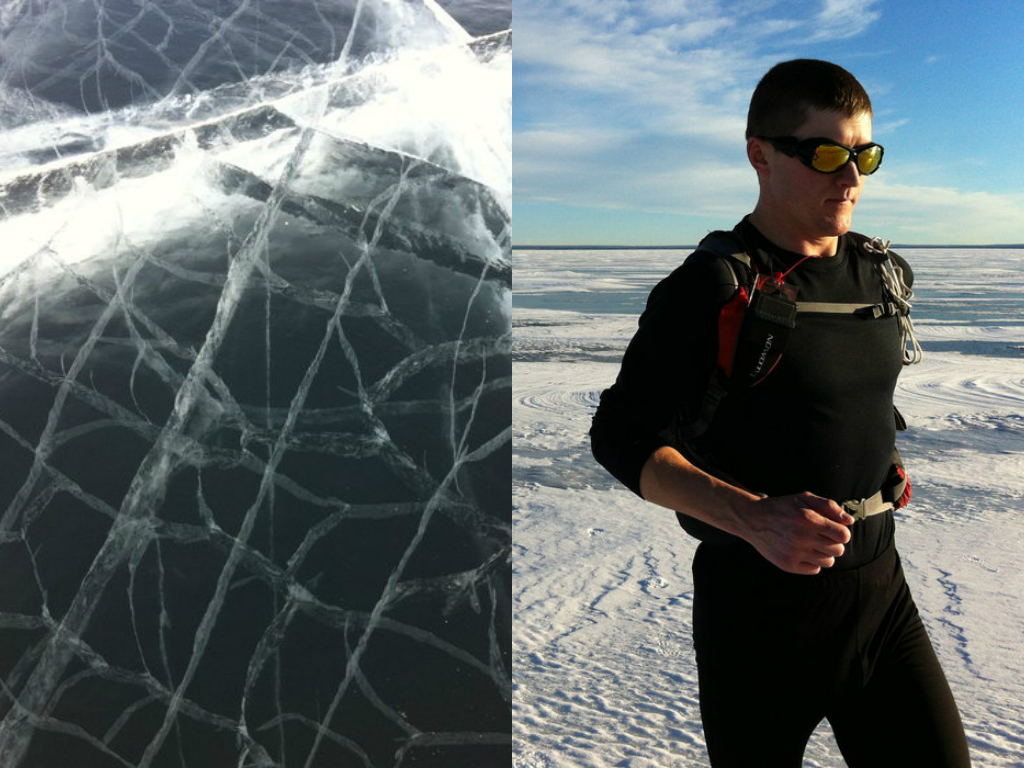 Matt told a number of people his departure time (approximately 9:15 a.m. local time from the Cold Lake Marina) and his expected whereabouts. He had his friend Josh fly overhead and a ski patrol friend on speed dial in case of emergency. Matt and Emily completed the run together as it “would be safer that way.”

Because of the complete flatness of the route, one is able to see the other side of the lake. There are no markers on the ice or any sort of mid-point landmarks that a runner can gauge off.

So, how do they run in a straight line? “Before I leave, I determine the bearing to follow to get me to the other side of the lake,” he says. “When I’m at the start, I put this in my compass and then find an object on the horizon that lines up with that bearing. Sometimes this is a cell phone tower or a notch in the trees. I also regularly look back as I’m running away from shore to get a mental image of what I’ll be looking for on the way back.”

Check out the route below as, on first impression, it appears that they were running on water.

He recommends running with a friend and to not deviate from your original path. “Don’t rely on someone else to get you out of a bad situation; be prepared to get yourself out of it,” he says. Note that the return route in the above map is almost identical to the first-half of the run.

The Setlacks made it 3-4K from the northeast shore of Cold Lake and were forced to turn back because of poor ice conditions. By that point, daylight was limited. In total, the two ran 43.1K in 4:29:16, according to Matt’s GPS data on Strava. 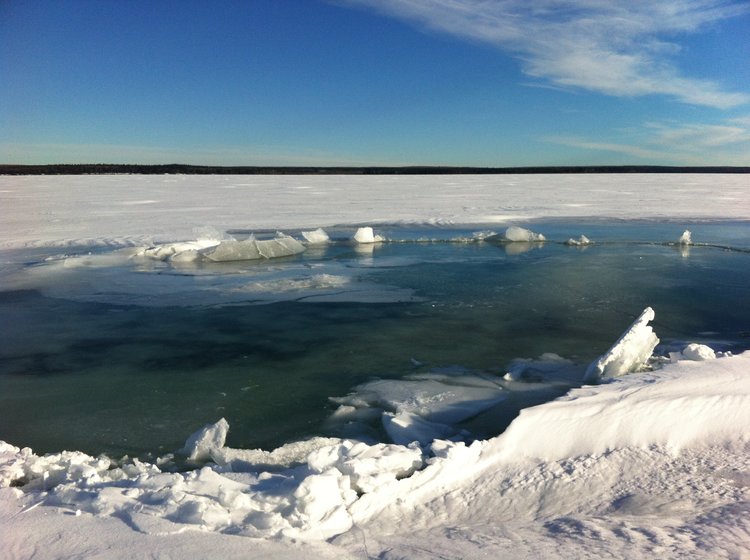 “The ice for the entire journey was quite thick (12 inches on average),” he says. “I could see right through the ice like a window and could tell how thick it was. The ice was completely cracked near the point where we turned back. There was a large gash in the ice that appeared to go on for miles. The pressure ridge was formed by one sheet of ice sliding under another sheet of ice. It was certainly not safe to cross.”

Matt would like to make a complete crossing of Cold Lake in the next two months, either via running or cross-country skiing, depending on the ice conditions. Matt chronicled the entire Jan. 15 journey on his (and Emily’s) blog.