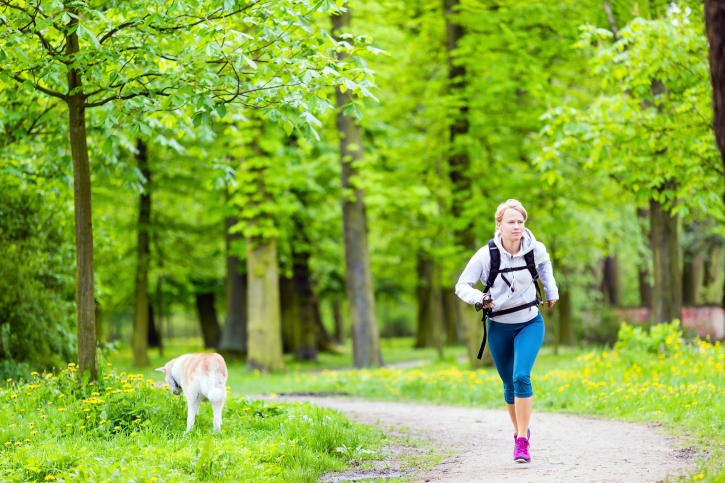 Running as means of transportation is a blessing for busy runners looking for the most efficient way to get around town. Those who run-commute have it pretty good: they don’t have to deal with stressful public transit rides or traffic jams, subway breakdowns won’t have them late and they arrive to work with minds clear. It’s hard to argue against the run-commute. For runners who aren’t early birds and struggle with fatigue after a long workday, the daily run can be taken care of during a time when you’d already be out of the house. Many work places have a gym at the office or close by making showers easily accessible (and a space to do stretches and strength work if you feel inclined). Plus, by run-commuting, you save money while doing your body a whole lot of good. Considering run-commuting? Here are some tips:

It’s easy to map out a route and calculate the time based on your typical pace-per-kilometre. That’s fine when you’re going for a leisurely run and aren’t held to a strict time to be back. When you’re running to work, you have to be at the office and ready to go. Your route could take longer than expected. Run it on an evening off so you know how long it will actually take.

2. It’s all in the backpack

An uncomfortable backpack will be noticeable on your run. You don’t want something that makes your shoulders ache a few minutes in, nor do you want it bouncing. There are small packs designed for running which carry only the basics.

3. Get lunches at work

Don’t add weight to your bag by stuffing it with food. A few things is fine but if there’s a grocery store nearby the office, you can pick up lunches there.

Think essential items only. Don’t pack things you don’t need. Those only add weight to your bag. Plus, you don’t even use them anyway.

5. Treat the way home as a fast workout

You might be a little reluctant to treat the way there as a fast tempo run. No one wants to show up to the morning meeting beet-red in the face. The way home is fair game. Time it and see how fast you can do it. Since you’re running the same route every day, it will become a challenge to look forward to.

Allow yourself enough time to get ready for the day. Arrive early so you can shower and make yourself presentable. If you arrive early, you might even get in a little cool down before it’s time to be firing off those emails.

If you’re daunted by the distance of your commute, get a cycling stretch in there. Just because it’s a longer distance doesn’t mean that you have to stick with the boring drive or bus ride. Slowly you can scale back the time spent on the bike to increase your running distance. Eventually, you may be able to run the full route comfortably.

8. Mentally prep yourself for the work day

The downside of other commutes is that they can be stressful. Buses get delayed, public transit is packed and getting stuck in traffic sucks. If you start the day running you can zone-out or think positive thoughts to motivate you for the day.