Show your pride in your sport by hanging one of these inspirational running posters on your wall. 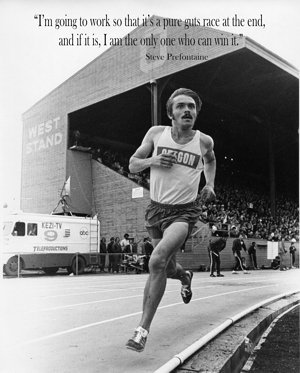 Prefontaine once held the American record at seven distances on the track. These events ranged from the 2,000m to the 10,000m, proving Pre’s versatility. He trained under Bill Bowman at the University of Oregon. He lost only two races during his entire college career and won three NCAA cross-country titles as well as four consecutive titles in the 5K. He attended the 1972 Olympic Games in Munich. His early death by car accident at the age of 24 left him an enigma in the running world. 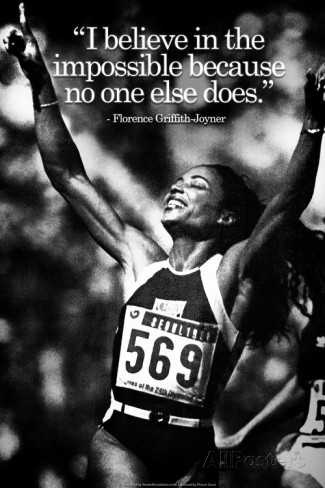 Fondly referred to as “Flo-Jo,” Griffith-Joyner is still revered as the fastest woman ever. The world record-holder in the 100m and 200m dashes was known for her colourful personality. She won three Olympic gold medals during the course of her career. She died in her sleep of an epileptic seizure at the age of 38.

Griffith-Joyner’s reputation has since been dogged by rumours and speculations of drug use. However, she was frequently tested during her athletic career and never failed a screening. 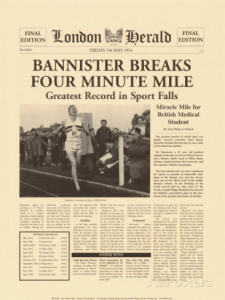 This poster is a copy of the front page of the London Herald after Roger Bannister’s historic run that made him the first man to ever break four minutes in the mile. He ran 3.59.4. The run took place on the Iffley Road Track at Oxford in 1954. The record lasted just 46 days before it was beaten by Bannister’s rival, John Landy, who ran 3.57.9 in Turku, Finland.

Bannister, a medical student at the time, went on to become a neurologist. 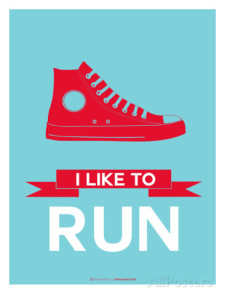 For the runner whose tastes in decor are a bit more simplistic, there’s this poster. Let’s be real, we all like to run and, for many of us, that is our go-to answer when non-runners as (somewhat disbelievingly, sometimes) ask why we spend so much time running.

Note: we do not actually recommend going for a run in converse-style sneaks. 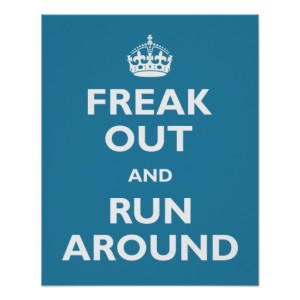 5) Freak out and run around

While we can picture this poster pinned in your average college student’s dorm room, it makes even more sense. First, one freaks out, then runs around  and, voila, they are no longer as freaked out as they were. 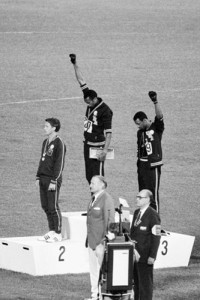 During the medal ceremony for the 200m dash at the 1968 Olympics in Mexico City, gold medallist Tommie Smith and bronze medallist John Carlos raised black-glove-encased fists for the duration of the American national anthem. Commonly referred to as the “black power salute,” in his subsequent autobiography, Tommie Smith states it was a gesture in support of human rights. 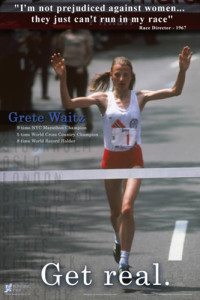 “Im not prejudiced against women…they just can’t run in my race.”– Race Director 1967

In 1979, Grete Waitz became the first woman to ever run a marathon in under two and a half hours. Between 1978 and 1988, she won nine New York Marathons, a feat no one has reproduced.

The marathon was not an Olympic event open to women until 1984, meaning that during the two Olympic Games Waitz attended (Munich and Montreal), she was forced to compete in the 1,500m, much shorter than her best distance. 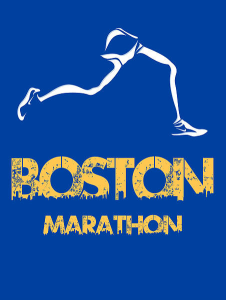 Any runner who has completed the Boston Marathon knows it is an unforgettable experience. Many runners choose to commemorate this race with a display of their medal or race bib. For those who wish to display their Boston pride in a less showy way, a Boston Marathon poster is the way to go.

We recommend placing the poster in an area where it is visible from your home treadmill or elliptical, for an extra boost of inspiration. 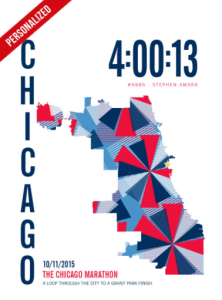 This website allows you to insert your own race details, like time, date and bib number, for a completely personalized running poster.

This poster makes for a great way to celebrate a PB, or a perfect gift for that running buddy that already has every gadget and piece of gear they could possibly ever want.

Different colours are available, so you can match you other decor, 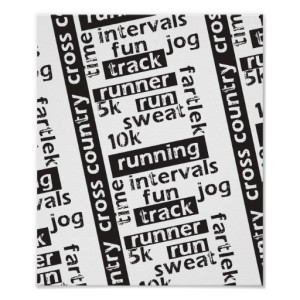 Black and white matches everything, right?