Log on to any form of social media and you’re bound to be bombarded with “fitspo” and #motivationmonday (Tuesday, Wednesday, so on). There are lots of great running quotes out there, from athletes, authors, poets, presidents and more. There are also a lot of quotes that are – forgive me for being harsh – kind of dumb. The following list is a collection of both types, a reminder to take those motivational messages with a grain of salt, as well as to get you pumped for your next run.

1) “Winning is great, sure, but if you are really going to do something in life, the secret is learning how to lose” – Wilma Rudolph

Wise, wise words, Wilma. The truth about running is that it doesn’t always go well. Sometimes you hit the wall, sometimes you get injured and sometimes it’s just not your day. And that’s okay. 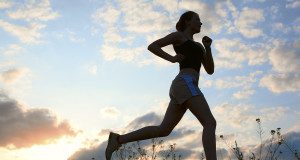 Okay Bill, we agree, to an extent. Yes, run in the rain, run in the snow, run in the cold, but for goodness sakes, if it’s hailing or below -35C, just stay inside. We won’t think you’re soft.

This isn’t necessarily true. We also often see shirts that say things like “Running—cheaper than therapy” or the likes of that. While running is great for both physical and mental health, it does not fix problems or replace support systems. And it is OK to have a bad day on a day that you run, or a good day on a day that you didn’t. 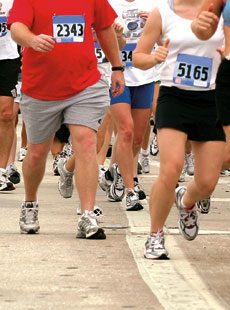 4) “I often hear someone say I’m not a real runner. We are all runners, some just run faster than others. I never met a fake runner” – Bart Yasso

Preach it, Bart. All runners are real runners, no matter the pace. If you feel the need to qualify your performance, you can say, “I’m not an elite” but since that is 99 per cent of us, it may be a bit redundant.

5) “With self-discipline, all things are possible” – Theodore Roosevelt

Isn’t it amazing the difference in self-discipline it takes to force yourself out of bed at 6:00 a.m. on a -30C January morning and to head out the door on a sunny day in June?

Believing in yourself is the first step to anything. 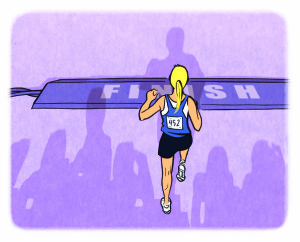 7) “To get to the finish line, you’ll have to try lots of different paths” – Amby Burfoot

In training, injury prevention, recovery and nutrition, each runner’s body and mind is unique and will thrive on different strategies. The journey of a lifetime of running is figuring out what works for you through an increased awareness of yourself—a process that can be incredibly rewarding.

The key to a happy life is making the time you carve out for the things you love unnegotiable. And this can seem impossible, whether it be due to a hectic work schedule, kids, family, school or travel. If you are so busy that you don’t have time for the things that you love, other things need to be dropped.

Sometimes, the days when we drag our butts out the door when we don’t feel like it, end up being the best runs.

10) “The will to win means nothing without the will to prepare.” – Juma Ikangaa

Wanting to win is not enough. You have to be focused enough to put the time into training. 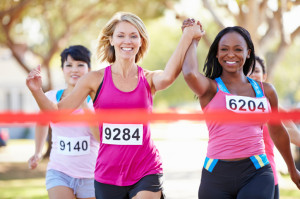 The best reason to run is because you love it, not because you feel like you have to. If you get to the point where running feels more like a chore to ensure your physical health, than a joyful experience, take a break and explore some other activities. You’ll return to running with a refreshed outlook.

12) “Listen to your body. Do not be a blind and deaf tenant” – Dr. George Sheehan

The worst mistake a runner can make is also by far the most common one—not listening to your body when it is telling you that it’s hurting, that the mileage is too high, that the pace isn’t sustainable, or that it isn’t getting enough calories.

13) “Running is the greatest metaphor for life, because you get out of it what you put into it” – Oprah Winfrey

I may take some heat for saying this, but this Oprah quote has always really bothered me—because in my opinion, it isn’t true. I have been around way too many injured runners, struggling to heal their bodies, to hold the opinion that they just aren’t putting enough effort into getting back to their sport. I have seen people train “perfectly” only to hit the wall during a race. Running doesn’t always give you back what you put into it and neither does life. Sometimes life throws curveballs. I think a better way to phrase this would be “Running is the greatest metaphor for life, because it is always teaching you more about yourself.”

We’ve all dealt with non-runners who have no idea how long a half- or full-marathon is, but this is just hilarious. 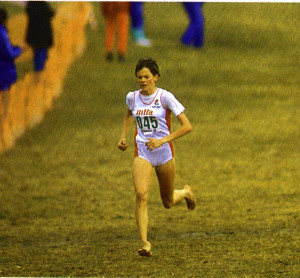 15) “The freedom of cross-country is so primitive.  It’s woman versus nature” – Lynn Jennings

I love that she says woman versus nature, not man.

To remind us that there are many different definitions of winning, and not all of them have to do with a gold medal.

17) “We run, not because we think it is doing us good, but because we enjoy it and cannot help ourselves, the more restricted our society and work become, the more necessary it will be to find some outlet for this craving for freedom” – Sir Roger Bannister

Roger Bannister, best known as half of the miracle mile, has it right that running has to remain as an outlet in our increasingly stressful world.

18) “Life is often compared to a marathon, but I think it is more like being a sprinter; long stretches of hard work punctuated by brief moments in which we are given the opportunity to perform at our best”  – Michael Johnson

I think this quote makes sense, even for distance junkies. Enjoy the precious moments of life like you enjoy that post race glow. 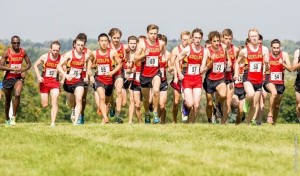 19) “Running is not, as it so often seems, only about what you did in your last race or about how many miles you ran last week. It is, in a much more important way, about community, about appreciating all the miles run by other runners, too”  – Richard O’Brien

It can be easy to get caught up racing and training, but the best part of running is truly the community. It is amazing how thousands of people that don’t know each other can show up on the same start line and share a love of the same sport.

20) “If one could run without getting tired I don’t think one would often want to do anything else” – C.S Lewis

This is my personal favourite running quote. My love for C.S. Lewis as an author (The Lion, The Witch and The Wardrobe, anyone?), isn’t the only reason. I truly think that this quote encapsulates the sensation of the best runs—that feeling like you could keep going forever.