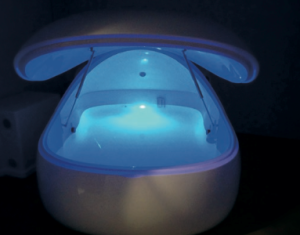 Climbing into an isolation tank, naked, in a stranger’s basement on a Wednesday afternoon, I have my doubts. I’ve booked a 90-minute appointment at Modern Gravity, one of two new “flotation spas” in Edmonton.

The outside of the tank, a white, boxy thing, looks as if it might be repurposed laboratory equipment. I open the door. The interior of the tank reminds me of a ’70s-era submarine: the greeny-blue hues, the venting, the shimmering underwater lights. I climb into the shin-deep water, noticeably viscous and soft with epsom salts, and lie back. I immediately float effortlessly.

Isolation tanks are designed to reduce the amount of stimulus your body receives. Both the water and the air are exactly skin temperature (34 C). Once I close the hatch and dim the lights, I’m in a dark, sound-proofed chamber, for an hour and a half. 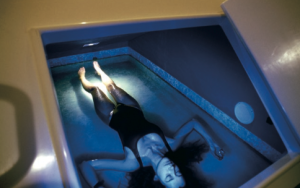 Trendy in the 1970s, isolation tanks were thought to induce lucid dreaming and visual hallucinations. The tanks fell out of vogue around the same time as patchouli and bell bottoms. For the past 30 years, the tanks existed, literally and figuratively, underground. If you dug around, most bigger cities in North America had one or two people operating a single tank out of their basements. Like Modern Gravity (which just opened its new, swanky facilities with state-of-the-art tanks), the tanks were often relics from the float tank’s heydey.

Rob Schreyer’s Aspire Centre for Health and Wellness in New York is one of the only physical therapy clinics in North America to include flotation therapy amongst its treatments. He’s also a university professor who stumbled upon flotation therapy several years ago. He brought one tank to his practice out of curiosity, but shortly after bought another. He estimates that they see about 18 people floating every day. Many of these repeat floaters are athletes.

“During the New York City Marathon, we had a day when it was basically all day floats,” says Schreyer. Mostly, clients were runners visiting from Europe, where flotation as a recovery tool is more well-known.

“I see float as a really untapped resource for physical therapy and sport,” he says. He points out that flotation therapy relaxes the body and gives a greater sense of bodily awareness – both very helpful in treating injuries.

He says he incorporates flotation therapy in his practice in those two ways. If a marathon runner comes in with a nonspecific ache or pain, he’ll have them float.

“After the float, I’ll often be able to get a better feeling of the problem.” He’ll also have some particularly tense patients float before he treats them.

About an hour into my float, my whole body starts to twitch and spasm. The spasms aren’t painful, but they become annoying and last for days afterwards. Apparently this is not uncommon for athletes, whose muscular strength can mask subtle misalignments and injuries. Schreyer tells me that my muscles are readjusting to the joints having returning to their correct state in the tank. He suggests I follow up with my local physiotherapist.

In subsequent floats, also ridden with muscle spasms, I had some hints, some soupy “deep” thoughts about my body’s connection to my mind, of flotation therapy’s power for athletic mental training.

Schreyer concurs: flotation therapy can enhance visualization. “After the first 20 minutes of floating,” says Schreyer, “you fall into that stasis state between being awake and asleep. For athletes who are really in tune with what they’re trying to visualize, they’ll get into a state where it’s a loop of visualization. It definitely has profound potential.”