Runners are often considered to have impressively high pain tolerances. Remember the T-shirts that said ‘my sport is your sport’s punishment’? That basically sums up how non-runners think of runners – tough, and a little odd for wanting to do something so difficult as their leisure activity. While runners’ pain tolerance is what allows us to push through to a new personal best, or slug out a first marathon, it can also have some negative consequences when it comes to injury prevention. There’s a time to push through discomfort and there’s a time to pull back, and having a high pain tolerance can blur those lines.

Hey runners: we ALL have a high pain tolerance. When it comes to running and injury, that’s nothing to be proud of.

I’m all about celebrating low pain tolerances. I’d bet those who shut it down at the first signs of a niggle tend to have the longest careers.

Amelia Boone is an OCR world champion and ultrarunner who pointed out on Twitter the pitfalls that come from become accustomed to pain. She tweeted, “Hey runners: we ALL have a high pain tolerance. When it comes to running and injury, that’s nothing to be proud of. I’m all about celebrating low pain tolerances. I’d bet those who shut it down at the first signs of a niggle tend to have the longest careers.”

In a recent article for Outside Magazine, Alex Hutchinson looked into this phenomenon of pain tolerance in endurance athletes, finding that when it comes to withstanding low-grade discomfort, runners are much better than soccer players and those who don’t play sports. Hutchinson writes, “I interviewed a German scientist named Wolfgang Freund who had recently completed a study on the pain tolerance of ultra-endurance runners,” Hutchinson writes. “Subjects in the study had to hold their hands in ice water for as long as possible. The non-athlete control group lasted an average of 96 seconds before giving up; every single one of the runners, in contrast, made it to the three-minute safety cut-off, at which point they rated the pain as a mere 6 out of 10 on average.”

When it comes to pain tolerance in endurance sport, it’s the ability to withstand that makes people successful, but it’s also what can ruin a career. Running is all about consistency, and spotting an injury early is crucial. It’s important to understand that discomfort means you’re running hard and pain means you’re in the injury zone.

Reid Coolsaet says with his athletes, this is the advice he gives. “Running through injury is a no go, but running through soreness is fine. When you have a sore muscle it’s ok to run, but a sore tendon, ligament, or joint isn’t ok. If you can’t run properly, you’re not going to make the gains you want to anyway, and if your pain is getting worse as you run, it’s time to stop.”

RELATED: How to differentiate between an injury and harmless discomfort 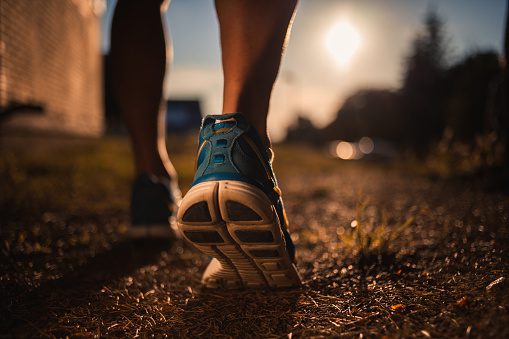 How to differentiate between the two

While running can be uncomfortable, running should never be painful. Signs you should shut down a run are any kind of tearing, stabbing, or sharp sensation. Another sign that it might be time for a little break is an ache that’s slowly getting worse, not better, over the course of your run (or the next few days).

RELATED: The 10 best pieces of running advice you’ll ever receive