Hydration 101 with Nuun
“On my second marathon,” says Bill Howard, a runner from Toronto, “I thought I had it all figured out. I got in all of my miles with no injuries and even picked up the pace from my last training cycle. I dismissed my worries about my GI difficulties by experimenting with different high-carbohydrate drinks and gels in lots of configurations.

“On race day, I told myself, I would crack the code between drinking too much sugary drinks and getting stomach rot and not drinking enough and getting dehydrated. But, as I headed into the last third of the race, my stomach began to feel sour and heavy and my GI system was iffy. I stopped drinking my usual carbohydrate heavy-drinks because the last few drinks had made it worse, but it was hot, and my thirst soon began to tell me that dehydration was on the way if I didn’t take in some hydration. I just didn’t know whether to switch to plain water, so I played it safe and waited it out. Later, as I stood in the line for the porta potty, checking my watch and feeling my PB slipping away, I cursed myself for pretending I had beaten a problem which had vexed me throughout my training.” 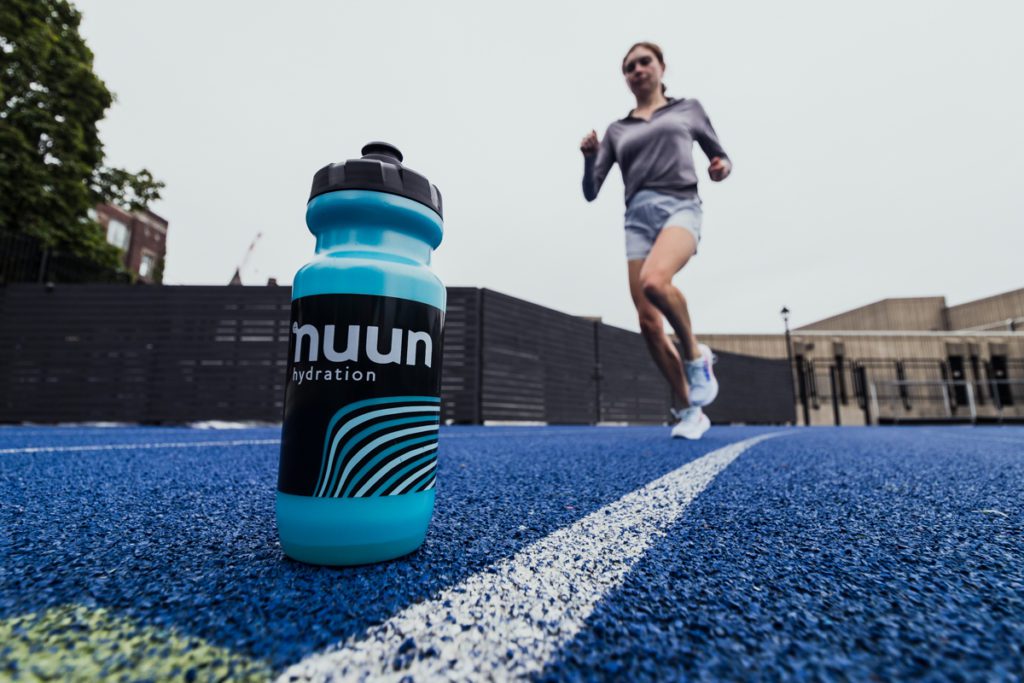 We all know that Bill is not alone. One of the biggest challenges any runner faces while training and racing is hydration. A drop of just two per cent from your optimal hydration level can lead to an 11 per cent decrease in your power output. So, we know that we need to be drinking during our workouts and races, but what should we drink? Will water do the trick?

It won’t. The water in our bodies is a solution of glucose, electrolytes, minerals and amino acids, so when we add pure water to the mix, our bodies work hard to get rid of it and we become more dehydrated.
That’s where sports drinks come in, you’re thinking. And you’re right, to a point. The problem is that most sport drinks are designed to taste good rather than hydrate. Research shows that the optimal hydration formula should be a 1.5 to four per cent solution of minerals and other electrolytes. Many of those popular hydration drinks feature six per cent and more solutions with lots of carbohydrates and sugars that are too concentrated for the gut to handle, so your body can’t absorb the liquid. Anyone else ever had that achy, bloated feeling in their gut at the end of a long marathon run or training session? 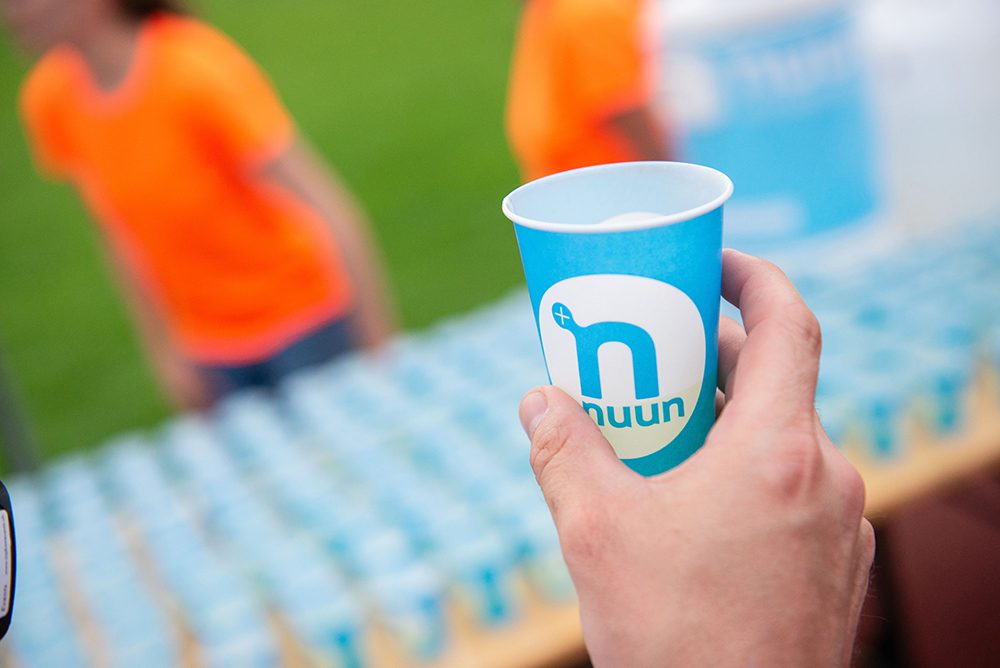 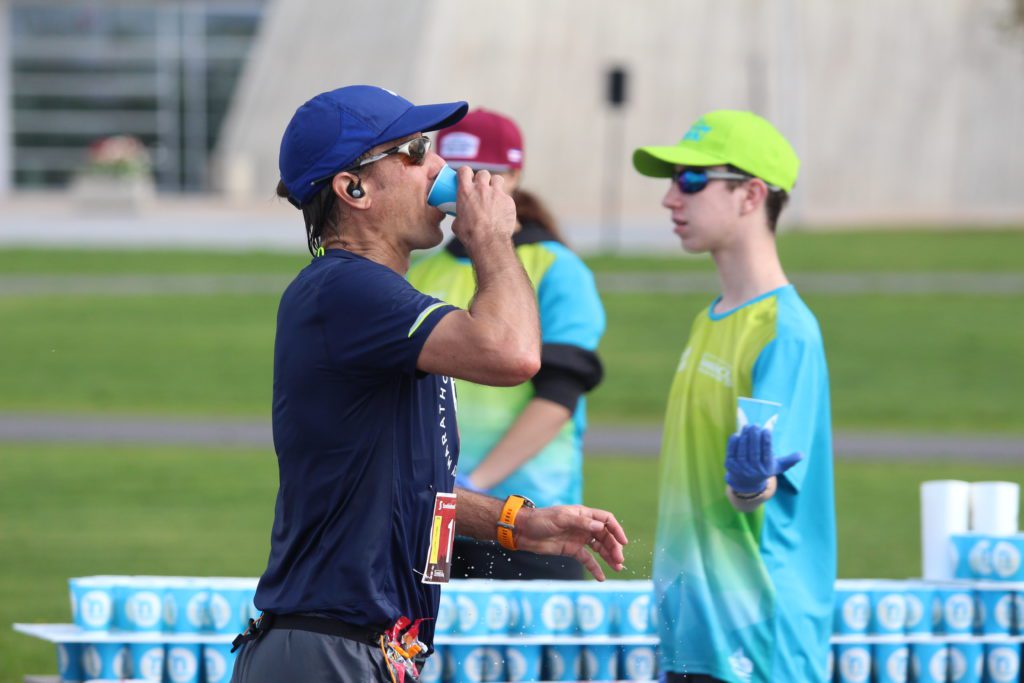 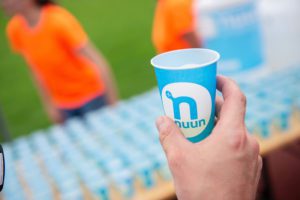 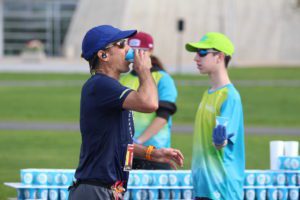 Customized, portable hydration
That’s why you need to try Nuun Sport, a hydration product that offers the right balance of electrolytes and glucose to ensure optimal hydration before, during and after exercise. It was the first hydration product on the market that separated electrolyte replacement from carbohydrates. What makes Nuun Sport even more innovative is that it comes as a tablet–you drop one tablet in 500 ml of water and within a couple of minutes you have a sports drink that’s ready to help you stay optimally hydrated during your next workout or race. Nuun Sport is a quick and easy solution to your hydration needs. There are 13 different flavours available in easily transportable canisters of 10 tablets, making it easy for runners to find the drink that meets their needs in terms of taste and performance. 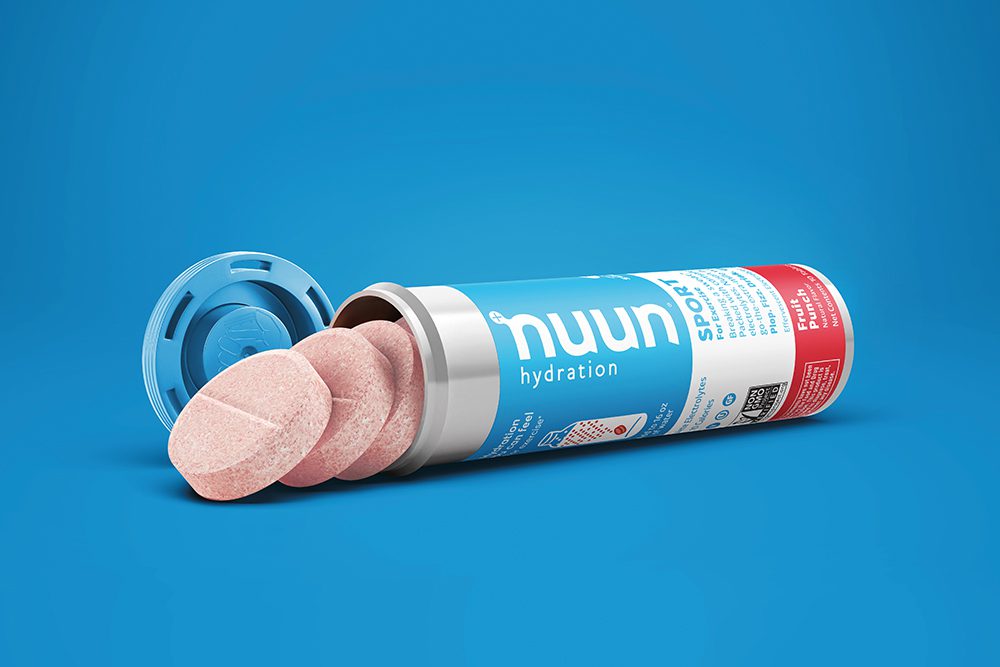 As an added bonus, Nuun Sport doesn’t contain an excess of sugars and glucose. There is only one gram of sugar and 10 calories in a 500 ml serving. That means you’re getting the electrolytes you need to stay hydrated and to perform, without the added calories you’d prefer not to take in. Nuun gives you the performance and is easy on your stomach.

“Plain water doesn’t hydrate, regardless of what people say,” says Dr. Stacy Sims, an American environmental exercise physiologist and nutrition scientist now based in New Zealand. Nuun was developed in response to her research, inspired by her own athletic endeavours that include pro bike racing, university rowing, Ironman and Xterra triathlon racing, along with ultramarathon running.

Dr. Sims’ research also showed the importance of separating your hydration from your fuel when you’re training and racing. Yeah, that’s right–those “sport” drinks that you think are helping you fuel are actually exacerbating those stomach issues. The research shows that you need to hydrate yourself with the stuff in your water bottle, and feed yourself with stuff you can put in your pocket. 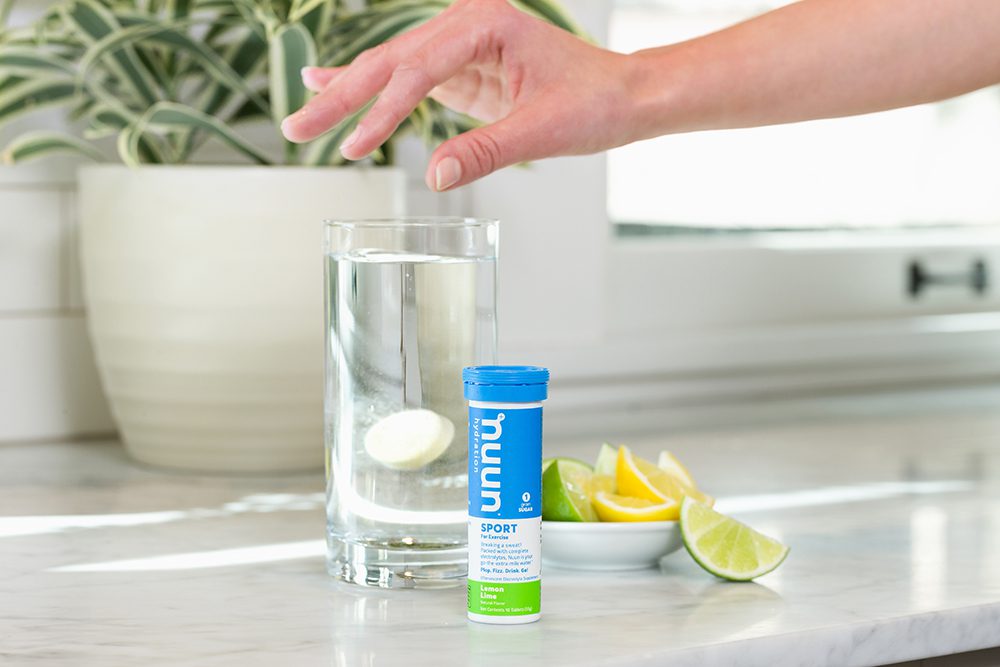 Nuun looked at sports drinks and felt that the existing choices were off. They set out to create a product that elevated your hydration without dehydrating you. They reduced the impact on our planet by avoiding the energy used to ship water everywhere in single-use plastic bottles. And lastly, they championed the idea that sports nutrition companies need to be a voice for clean sport to level the playing field for all athletes.
Everything about Nuun is purpose-driven. Each Nuun Sport dissolvable tablet offers the optimal amount of electrolytes. It’s environmentally friendly–you use your own water bottle, fill it up from a tap or fountain, and drop in a tablet, dramatically reducing plastic waste in your home and at race sites.

Nuun intersects the world of sports nutrition and natural products, too. Only all-natural ingredients are used, there are no genetically modified organisms (it’s non-GMO) and it is vegan-friendly. It’s also certified with Informed Choice (InformedChoice.org), which means that athletes can use the products with complete trust that they don’t contain any banned substances. 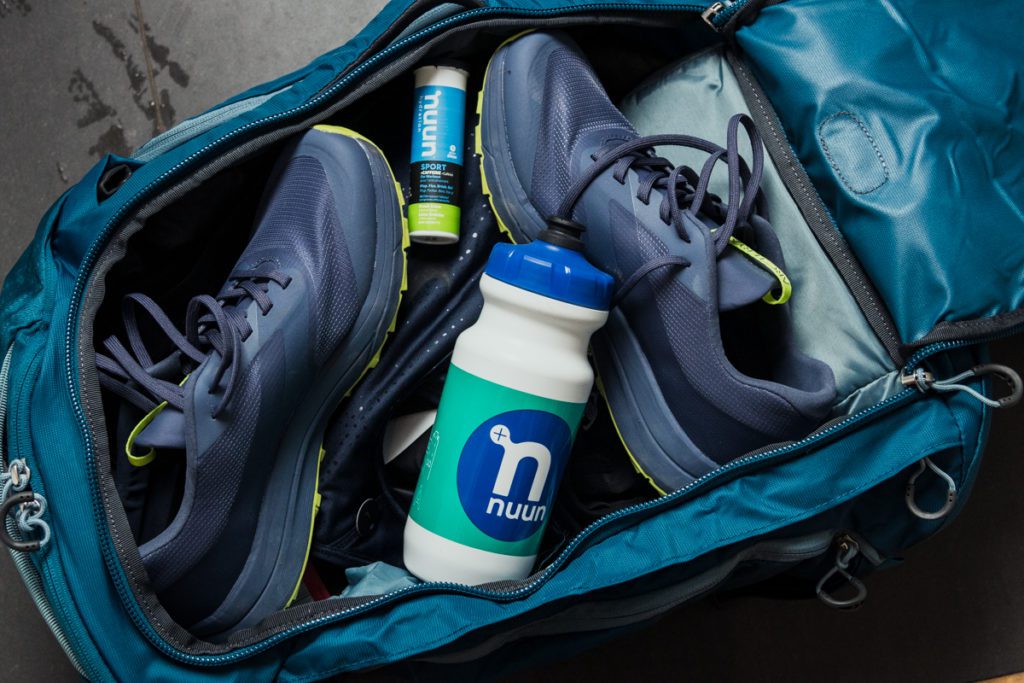 When it comes to efforts longer than 90 minutes, it turns out that you do need a drink with more sugars in it along with all the electrolytes to replace those that you’re sweating out. That’s where Nuun Endurance, the product you’ll find at events like the Scotiabank Toronto Waterfront Marathon and the Scotiabank Ottawa Marathon, comes in. It might come in a powder form, but like Nuun Sport, the formula is designed to hydrate, not to fuel. 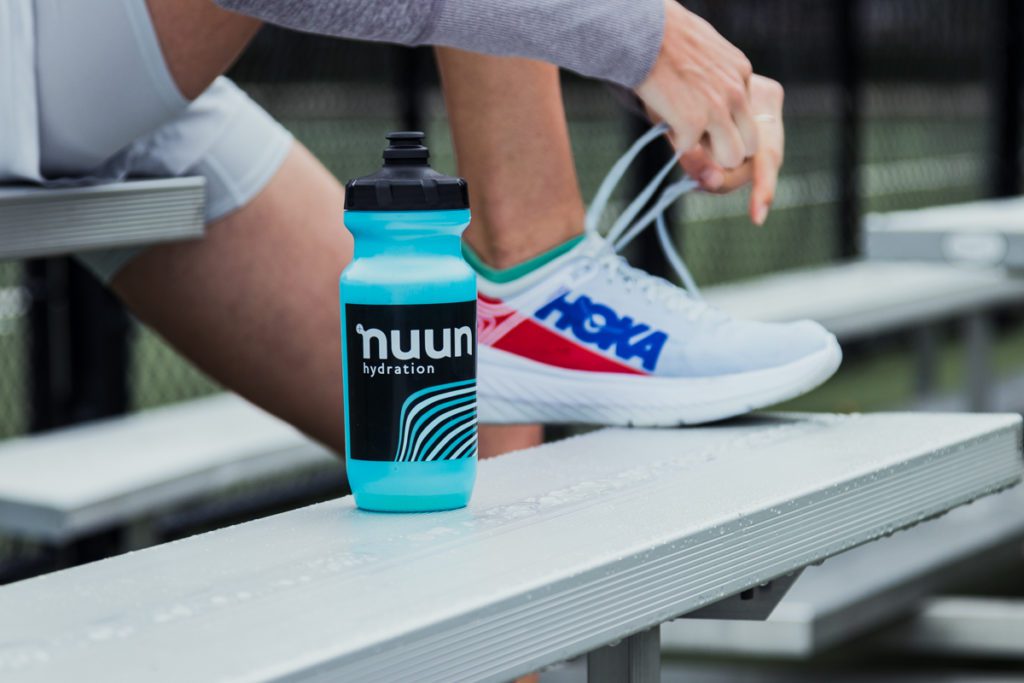 Nuun Sport is taking off with Canadian runners because it’s so convenient and works better than water or other carbohydrate- and sugar-based sport drinks. You perform and feel better, all thanks to a tiny tablet that you can drop into a water bottle. Race directors are seeing results in better-hydrated runners. The Canada Running Series, for instance, who put on the Scotiabank Toronto Waterfront Toronto Marathon, the Scotiabank Vancouver Half-Marathon and 5K and many other races, started out offering Nuun in their lululemon events and now provide it at all of their events. No wonder–Nuun is scientifically proven hydration with a purpose: you give your body what you need, and leave out all the stuff you don’t. 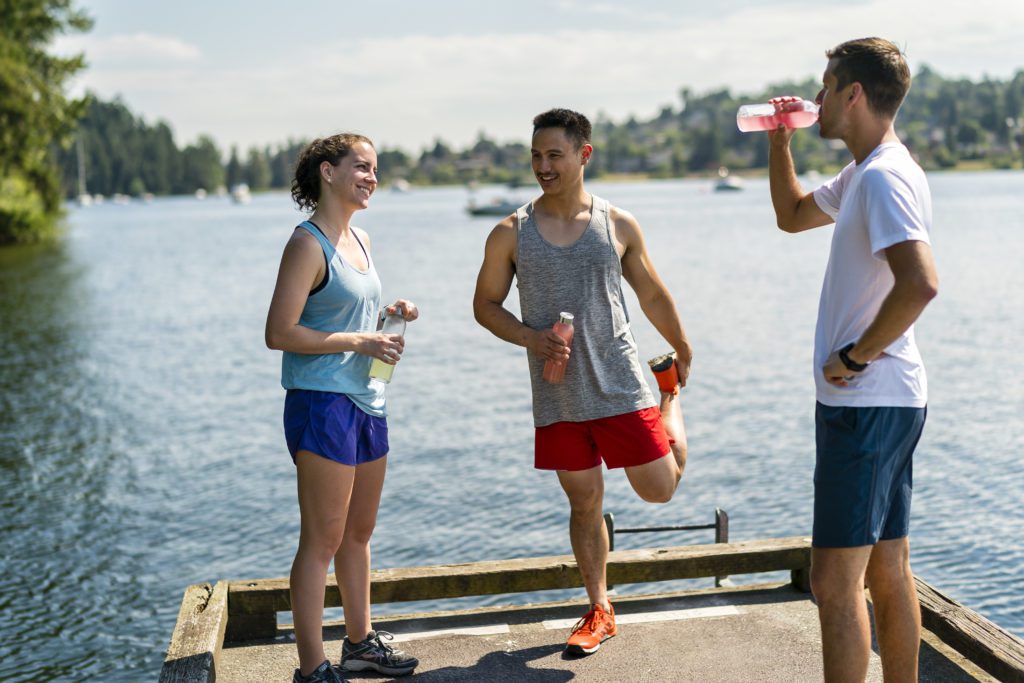