It’s 5:20 a.m. on a muggy August morning as Seanna Robinson bounds out of the darkness into the Tim Horton’s parking lot at Carlaw and Lakeshore. She’s wearing a Lower East Siders racing singlet and a big smile. We say hello before moving to the paved bike path, where more than 20 other runners appear in clutches of two, or six, or seven, from all directions–Leslieville, Riverdale and the Beach. To the south is the Canadian Tire store, and, beyond that, Tommy Thompson Park, also known as the Leslie Spit, which is the site of a number of local races, some of which Robinson has won.

It’s a testament to the welcoming vibe of the club she started seven years ago that all these people routinely show up at 5:30 on a Wednesday morning, winter and summer, to run intervals. Many are parents of young children, for whom the 6:00 p.m. time slot favoured by most other running clubs just doesn’t work, since there are kids to be picked up from daycare or school, groceries to be bought, dinner to be cooked, and a million other things.

“It started with just me, knowing that I needed people around me in order to do interval workouts,” says Robinson, “so I would invite anyone who wanted to to join me one morning a week, starting with my ever-present and loyal running buddy, my sister Tanis. The only caveat: we were, and are, busy working parents, so we needed to get them done at 5 a.m.”

“Then we went about singing the praises of how great it was to get a workout in that early. People started trying it out. For some it didn’t stick, but many became loyal early morning work-outers.”

Robinson, who is now in her 40s, had trained competitively with coach Ross Ristuccia, formerly of the University of Toronto Track Club, since Grade 10, and during her years at Queen’s University she ran track and captained the cross-country team. She set her personal bests (which include a 10:38 full Ironman) during her 20s, but says she has “come very close and been way more consistent a racer in my 40s… If only I could mix the mind of me now with the body of me 20 years ago!”

After having children, being a working parent meant needing to start her workout at her front door rather than traveling to a track. “That’s about when I started doing weekly workouts in the mornings with Tanis,” she says. “Amazingly, there is a large contingent of people with the same time management problems that I was experiencing, so 5:30 in the morning works well for them.”

Club member Elizabeth Gladney introduces herself and offers another reason why people love this club: “There’s no commitment or judgment,” she says. “If you show up, you show up, and if you don’t, you don’t.” (There is also no cost for participating.) An experienced 10K, half-marathon runner and trail runner, Gladney will tackle her first full marathon in Erie, Penn. on September 8. “Last year I nailed a PB at the Scotiabank (Toronto) Half,” she adds, “and I credit the Lower East Siders for helping me shave more than 10 minutes off my time.”

Robinson creates the Wednesday morning workouts, and offers guidance if people want it. Several members get together for Sunday morning long runs, and other workouts happen spontaneously via a closed Facebook group. There are anywhere from 30 to 40 active members (94 altogether on the Facebook page), which also includes a number of triathletes who have discovered each other through the group.

Andrew McKay is currently training for the Scotiabank Toronto Waterfront Marathon. It will be his fourth time running this race, and his 24th marathon. He credits his involvement with Lower East Siders for his continued interest in racing the marathon distance: “The group has been driving me for five years,” he says. “It’s the most positive group of training partners you could ask for, and they’ve made me a lot faster than I ever thought I could be.”

Joanna Kotsopoulous would agree. “I’m not the fastest of the group, but there is always someone to chase and lots of support at the end,” she says. “And with a PB last fall in the Chicago Marathon, I know the group has had a positive effect on my training.” 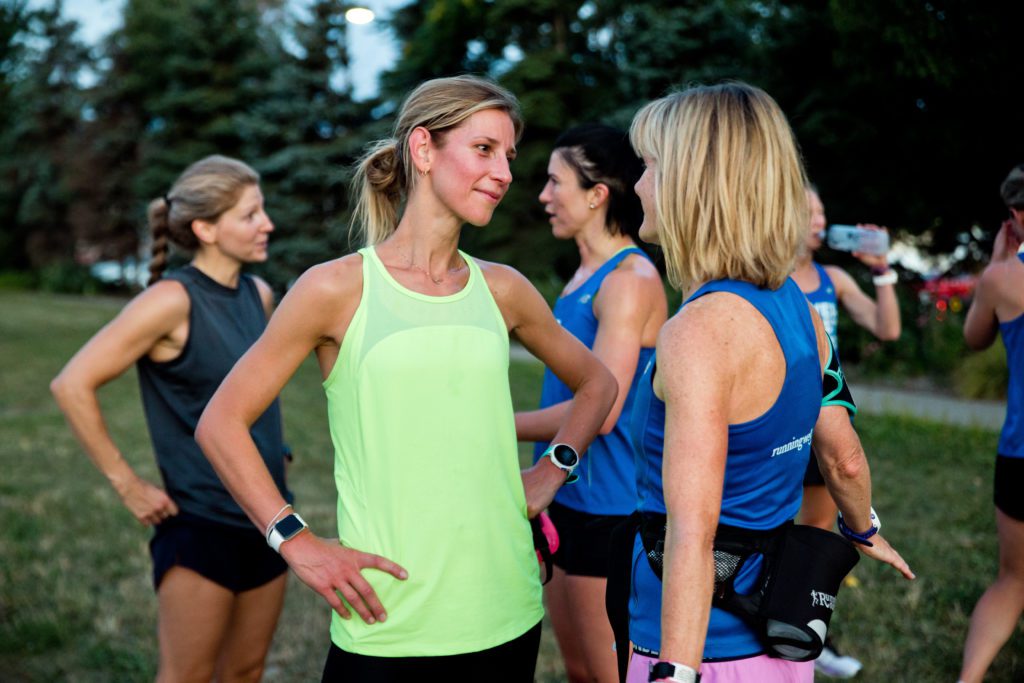 The crew that has assembled this morning takes off in a westerly direction as the sky gradually lightens. Robinson has measured intervals of 800m, 600m, 400m and 200m using GPS, and noting landmark references like signposts and roads that cross the path. “The tricky one is the 400,” says Robinson, who brings a cone when the workout includes it, so people don’t have to count lampposts.

Forty-five minutes later, the workout is done, and it’s no longer dark. Some of the group have already dispersed, taking off from their last interval. Others stand around chatting briefly before leaving. There’s no time for coffee after the workout, since there are lunches to be made and kids to be dropped off at daycare. But as the week progresses, the Facebook group is already buzzing with invitations to work out.