Media attention has been focused on various other Canadian track and field disciplines the past three years which has allowed Mohammed Ahmed to quietly evolve into the country’s best distance runner. The 25-year-old St. Catharines, Ont. native achieved the Rio Olympic qualifying standards in both the 5,000m and 10,000m last season and can therefore focus completely on Games preparation. Moreover, he can draw from his very impressive competitive experience. 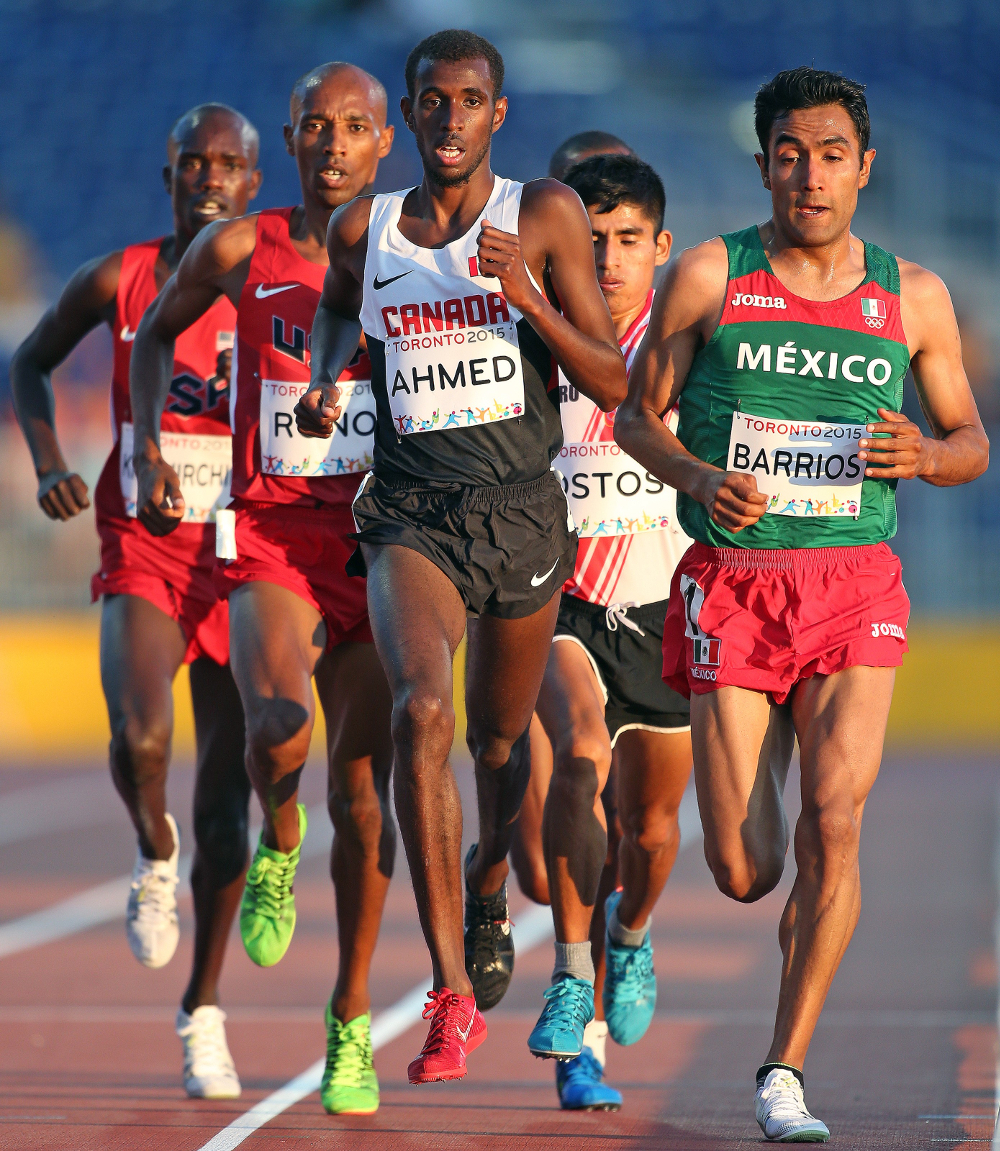 Besides representing Canada at four IAAF world cross-country championships, Ahmed first served notice he could be a world-class runner when he finished fourth at the 2010 IAAF World Junior Championships in Moncton, N.B. Just two years later, while still studying political science at the University of Wisconsin, Ahmed ran a 10,000m personal best of 27:34.64 to earn a place on his first Olympic team. His 18th place finish in London was admirable. A year later he went to Moscow and wound up ninth in the IAAF World Championships 10,000m final. No Canadian before him had ever cracked the top 10 at this distance.

Although running fast time would be nice, and it would be a dream, I never try to chase record. I try to let it come to me.

Last season he made the 5,000m final at his second senior world championships. These accomplishments have put him in the right frame of mind heading into Rio. “I expect to compete with the top guys, honestly. I have had a lot of world championships experience at a young age,” he explains. “That really helps me. I’m 25 and at that peak but I feel that time is running out and I really want to compete with the best and go out there and try to get a medal. That, essentially, is what I want to accomplish.” 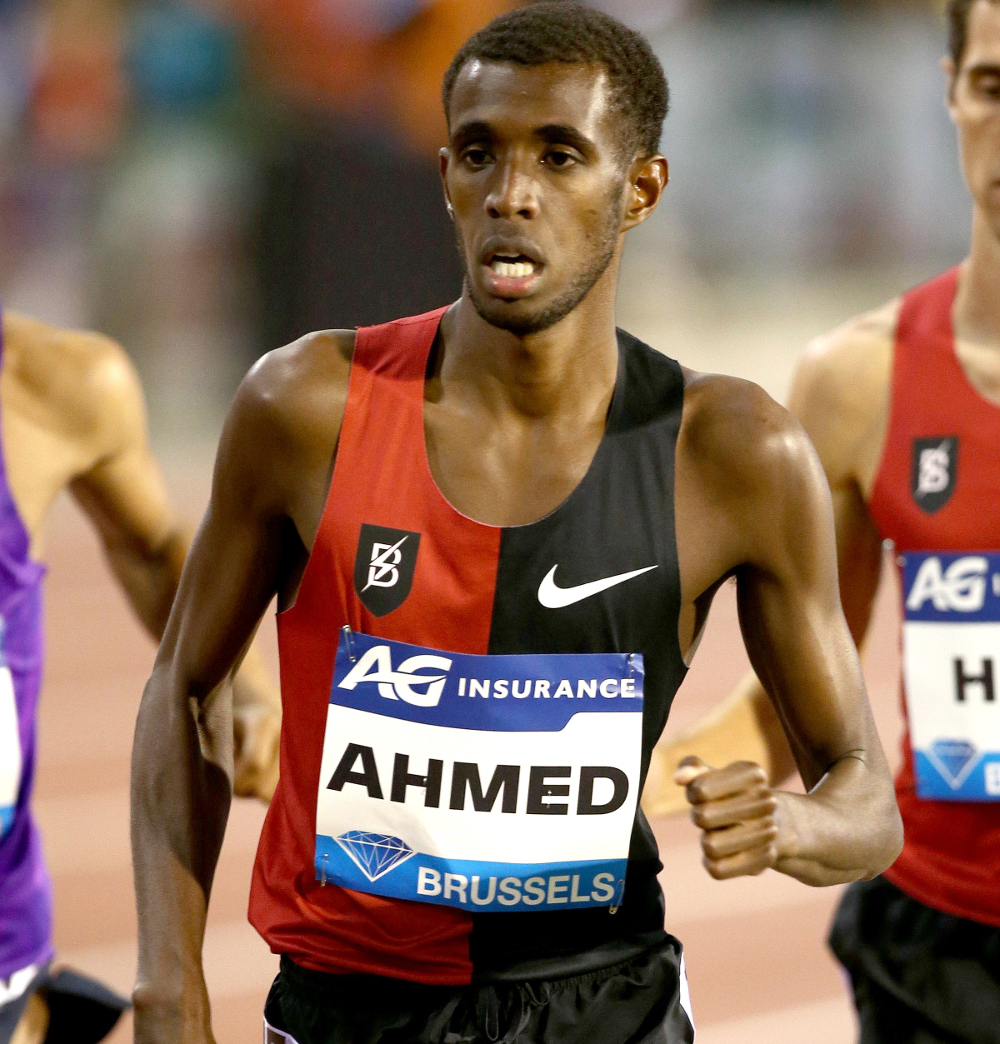 With the uncertainty of where the IAAF and World Anti-Doping Agency’s investigations are headed nobody knows who will line up in Rio. Ahmed doesn’t concern himself about what some Kenyans and Ethiopians might be doing preferring to put in the hard training as he always has.

“I remember being in awe of Kenyans and Ethiopians when I was on national teams,” he says. “You think ‘they are amazing athletes and I could never beat them.’ But obviously, as I have grown older, there are always whispers of doping. It’s cringe-worthy. “It’s numbing too, because every performance you see out there, that is one of the things that comes into your head: is that clean, is that real? I try to stay naive because I really don’t want to think about that and give them an advantage by thinking ‘they are on drugs and I can’t beat them.’ I know I am doing it clean and doing it to the best of my ability.”

Ahmed truly believes that regardless of the composition of the Olympic 10,000m final he can fight for a medal position. “Yeah, I really do,” he insists. “Given I am healthy going into the race I think I can definitely do it. You kind of see the progression in the one year. In the 2012 Olympics I was 18th in the 10,000m then the next year I was ninth. I was there with a lap to go, right there with those guys. But I just didn’t have the strength to keep up with them and sprint with them. Over the past two years I have improved my kick. Obviously my strength has improved as well.”

Ahmed underscored that point at last summer’s Pan Am Games in Toronto where he took the 10,000m gold medal with a terrific last lap sprint. Until that race, his kick had been his weak point. After performing well in the Beijing world championships a place in the star-studded Brussels Diamond League 5,000m was confirmed. He took full advantage of his good fortune removing more than three seconds from the Canadian record with a brilliant 13:10 clocking. That’s six seconds faster than Canadian rival Cam Levins has ever run. Eighteen months ago Ahmed moved to Portland, Ore. after being invited to join the Nike-sponsored Bowerman Track Club. Nike pays him a salary in addition to his $1,500 monthly Sport Canada stipend. This allows him to train twice a day and sufficient time to recover between sessions. He also has access to physiotherapy and, most importantly, the wisdom of coach Jerry Schumacher.

Ahmed shares a house with reigning U.S. 5,000m champion Ryan Hill, middle-distance specialist German Fernandez and a new addition to the club, Canadian 3,000m steeplechase record holder, Matt Hughes. A lot of their training is done together. “Honestly, our group has so much fun,” Ahmed says of his teammates. “Everyone gets along really well. It doesn’t feel like work. “We kind of make fun of each others’ mannerisms. For me it’s the way that I talk. Ryan Hill is an impersonator. He will get on your voice and your mannerisms how you speak and will create some crazy story and act it out as you. And we make fun of our coach a lot.”

Ahmed was born in Mogadishu, Somalia and spent the first 10 years of his life in Kenya. He arrived in Canada just before his 11th birthday. Growing up in St Catharines, he became a music fan. Accordingly he has introduced his roommates to the music of Canadians Dallas Green (City and Colour), k-os and K’naan, the latter being a fellow Somali-Canadian. And like K’naan, when he has free time, Ahmed enjoys the solitude of writing poetry. “It’s sort of like self therapy,” he says of his writing. “It’s whatever thoughts I have. It’s scribbling more than anything. I am quite shy about sharing my work.”

Somalian heritage is something he also shares with the reigning Olympic and world 5,000 and 10,000m champion, Mo Farah. They are related through their origin in the Isaaq clan of northwestern Somalia. Both live in Portland now although Farah, a British citizen, trains under the Nike Oregon Project. They sometimes see each other at the Nike track facility and will jog together. Otherwise they stay in touch via Facebook and texting. While Farah has been spending winters at a high-altitude training site in Ethiopia the Bowerman Track Club members have been in Flagstaff, Ariz. A short springtime training camp at Park City, Utah (2,500 m) was in the cards, too.

The results have been remarkable already. In February, he broke Kevin Sullivan’s Canadian 3,000m record with a time of 7:40.11. It was also a 15-second personal improvement. Although the Olympics is the primary focus, Ahmed does admit to wondering if he could run a 10,000m under 27 minutes one day. “That’s a goal of mine to go under 27 for sure,” he admits. “Although running fast times would be nice, and it would be a dream, I never try to chase records. I try to let it come to me. “It’s all about beating people in the race. I love the big stages and the Olympics and world championships. I always show up there. That’s my main focus, big races.”

Paul Gains is a respected sports journalist with over 30 years of experience covering track and field. He lives in Cambridge, Ont. Photos are courtesy of Claus Anderson and photorun.net.