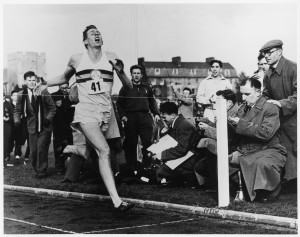 Roger Bannister has died at the age of 88 on March 3 in Oxford, England. Bannister was a legend of sportsmanship and athletic performance in running, most famous for achieving the first sub-4:00 mile (1,609m) at Iffley track in England, on May 6, 1954.

Bannister was born in Harrow England and began to run competitively at the age of 17 in Oxford in 1946. In just a year, he showed his natural talent and ran a 4:24:06 mile on only three half-hour training sessions a week. He won many mile and 800m races, and set his sights on the 1952 Helsinki Olympics. In 1950, his light training schedule began to make him lag behind other top runners. He picked up his training, however, and in July of 1950, he won the mile at the AAA Championships in White City in 4:07.08.

The 1952 Olympics were difficult for Bannister as a 1,500m semifinals favoured runners with more endurance than him. Although he finished fourth and set a British record of 3:46.30 for the distance, it was punishing race where all seven finishers set new Olympic records and the three medal winners were only decided in the last few metres.

Bannister was unhappy and pondered giving up running but set a new goal for himself instead: the sub-four minute mile. Using training techniques including fell running and periodization similar to those later used by Arthur Lydiard, Bannister,spurred on by the knowledge that Australian John Landy had the same goal, devoted himself to his task. On May 6, 1954, in a live broadcast track match between British AAA and Oxford University, Bannister ran the mile in 3.59.4. Bannister went on to improve on the time in the so-called Miracle Mile Race between himself and Landy, which Bannister won in 3.58.8. The race is commemorated with a bronze statue of Bannister and Landy at the gate of the Pacific National Exhibition in Vancouver.


In 1954, Bannister retired from running to become a neurologist. He was also responsible for introducing testing for anabolic steroids in athletes. He was knighted in 1975, and received many other honours. In 2011 he was diagnosed with Parkinson’s disease.
A giant of athletics, Sir Roger Bannister will be deeply missed by the running community.