From time to time, every runner embellishes the truth about a race or workout, but odds are those fibs are nowhere near as bad as the ones on the list below. These people not only lied about pace or race results, but they were immediately called on their dishonesty and very publicly outed. Here are the top (or not-so-top) five times runners were caught telling blatant lies.

Bre Tiesi, ex-wife of former NFL and CFL quarterback Johnny Manziel, ran a half-marathon in February 2019, finishing the race in 1:58:22. Tiesi started the run with an opening 10K in 1:31:29—14-minute-mile pace. She ran the next 11K in a mind-blowing 27 minutes, which is four-minute-mile pace. That’s right, Tiesi went from near the back of the pack (her projected finish time would have put her in about 320th place out of 411 runners) to running six-consecutive 4:01 miles to finish the race. Even after people online pointed out that her 11-mile split was missing (meaning she had likely cut the course) and that the women’s world record for the mile was 4:12, Tiesi refused to admit she had cheated, instead calling the accusations “sad and pathetic” in an Instagram story. Oddly enough, she hasn’t made a return to road racing since, which is strange when you consider her innate running abilities and world-class fitness.

A world record from Britney Spears

Back in March, Britney Spears took to her treadmill and ran the most incredible 100m in history, posting an unbelievable time of 5.97 seconds. What’s even wilder is that her time, which is more than three seconds faster than Usain Bolt‘s world record of 9.58, was nothing special for the pop star. In an Instagram post that she has since deleted, Spears wrote, “Usually I run 6 or 7 [seconds for the 100m],” adding that her “first try was 9.” The world was of course skeptical of Spears’s run, and while many people called her a liar, there’s a real chance she thought she was telling the truth. Honestly, why make up such an obvious lie? She clearly didn’t know that the time was a world record, and she might have been running 100 feet instead of 100 metres without realizing it. 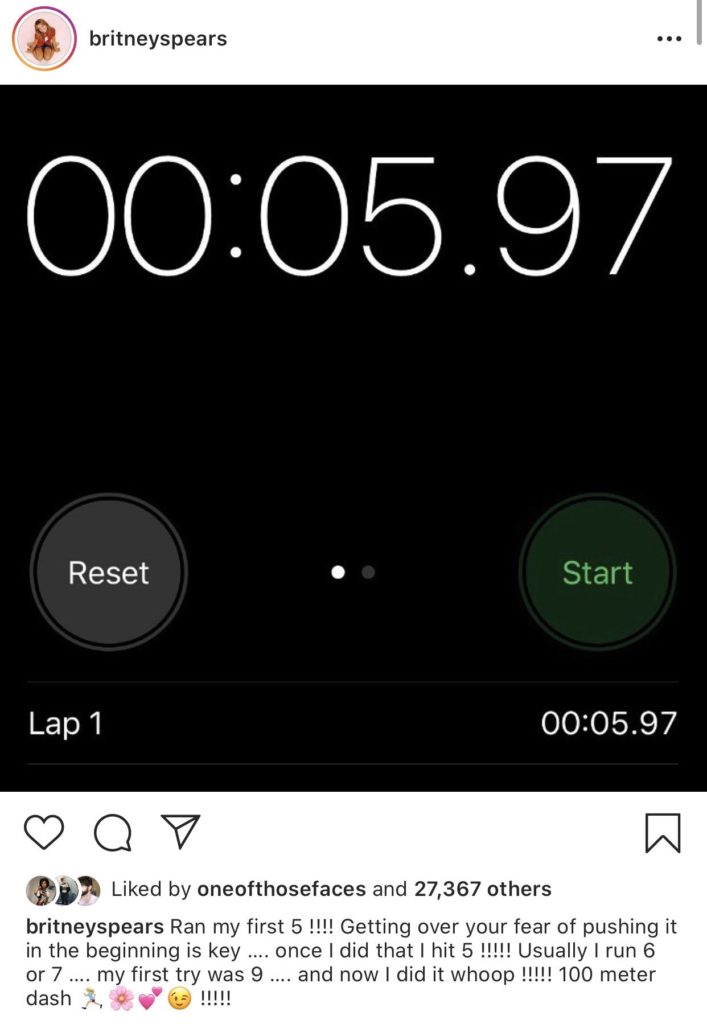 British soccer star Ross Barkley made headlines in the running community back in April when his club, Chelsea FC, made a big deal about a recent 5K that he had run. On Strava, it said he covered 5.2K in 16:11, which works out to 3:03 per kilometre. This would be a great time, but there was only one issue: Barkley’s Strava file showed the elapsed time was way longer than 16 minutes. That means that he paused his workout and rested before continuing on toward his impressive finishing time. To be fair, Barkley didn’t make a big deal about his run, and if the Chelsea Twitter page hadn’t posted about it, odds are no one ever would have noticed. Still, this is a good lesson for runners: don’t lie about your runs on Strava, because someone will eventually uncover the truth.

This could be a fake photo, but as shown in the picture below, a guy named Rob posted on Facebook about a recent 10-minute 5K that he ran, writing that his “training is going good.” Rob’s post got zero likes, which is surprising since his run is the fastest in history by more than a couple of minutes. Maybe his friends just don’t know how big of a deal a 10-minute 5K is and they don’t realize that their buddy just became a world record-holder. It might be too amazing to be true, but we’re hoping to see a sub-22-minute 10K from Rob in the near future.

The biggest lie on this list comes from the 1980 Boston Marathon, which American Rosie Ruiz won in 2:31. Ruiz crossed the line looking fresh, and she beat Canadian Jacqueline Gareau. Eight days after her big win, however, Ruiz was stripped of her medal when witnesses said they saw her hop onto the course in the last mile. More investigations also found that Ruiz had cheated at her only other marathon, which she ran in New York City. Ruiz finished 24th in New York, but she had taken the subway to the finish, and just like she later did in Boston, she jumped onto the course in the final stretch.