On Monday, Shalane Flanagan announced her retirement from professional running. The former NCAA champion, American record-holder (5,000m and 10,000m) and Olympic silver medallist has been a staple on the American running scene for nearly two decades. She’s closing out one of the most impressive and consistent running careers ever by an American woman.

Flanagan’s presence will be missed on the track and roads, but she’s not going far, as she also announced on Monday that she’s accepted a position as a Bowerman Track Club coach. This new role means that Flanagan’s influence on the running community is far from over, it has just shifted. As one of the running greats closes out her professional career, here’s a look back at all the times Flanagan made you scream, F**K YEAH!

When she won the 2017 NYC Marathon

Flanagan, who was then 36, had a stress fracture in her back in early 2017, which forced her to withdraw from the Boston Marathon. She came back that fall to win the NYC Marathon in a 2:26:53 to defeat Mary Keitany (the women–only world record-holder), who clocked a 2:27:54 that day. Flanagan ended Keitany’s three-year winning streak in what was a slow and tactical affair for much of the race before the action heightened in Manhattan. It was the first American win by a woman at a World Marathon Major since Deena Kastor won the London Marathon in 2006.

When Flanagan crossed the marathon finish line in 2017, she pumped her first and screamed a triumphant, “F**k yeah!”

When she was in a Superbowl commercial

Following her 2017 NYC Marathon win, Flanagan was featured in a Michelob Ultra Superbowl commercial. Flanagan, who grew up in Marblehead, Mass., was cheering for the Patriots, who would go on to win. (Marblehead is less than an hour’s drive from where the Patriots play home games.) The runner was featured alongside actor Chris Pratt, golfer Brooks Koepka and surfer Kelly Slater.

When she became a Halloween costume 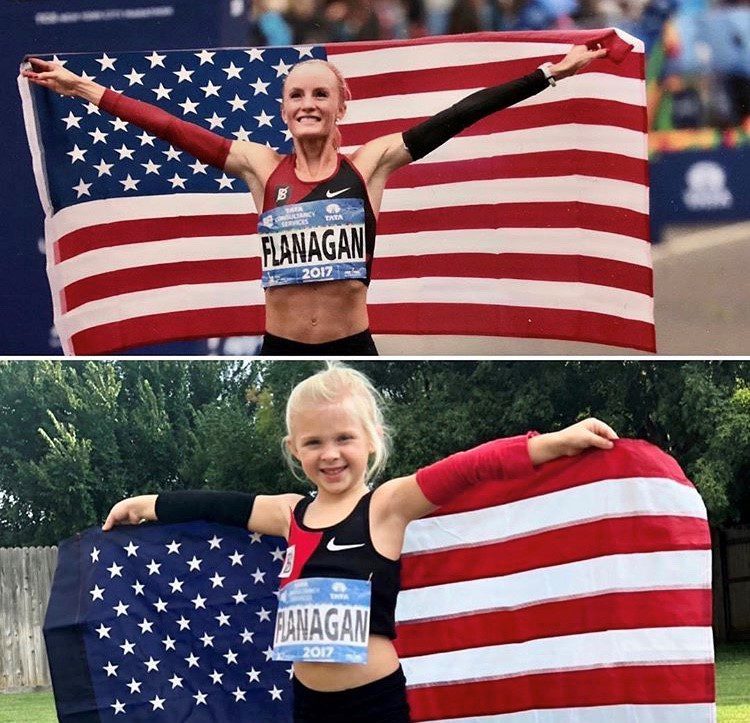 Flanagan is a longtime idol for runners everywhere, but especially after her New York performance. Many kids dress up as their favourite superheroes for Halloween, and last year, some dressed up like Flanagan.

When she made four Olympic teams

When she became an Olympic medallist

In 2008 at her second Olympics, Flanagan became an Olympic 10,000m silver medallist. She ran the race of her life to secure Olympic silver, finishing in 30:22.22, which is still the second-fastest 10,000m run by an American woman. Molly Huddle now own the American record at 30:13.17.