Listen, triathlon is great. Like running, it’s an endurance sport that gets people all around the world exercising, and that’s invaluable. But when it comes to the question of which is better, running or triathlon, the answer is obvious: running is best. Our friends at Triathlon Magazine Canada seem to think otherwise, and we don’t want beef with all you multi-sport athletes out there, but come on, you know it’s true. Here are seven reasons why we’re right. 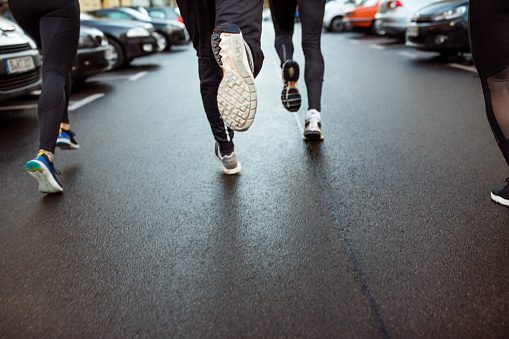 We have so much time on our hands

Triathletes spend so much time training. Like, way too long. Runners? We get our run in for the day, do some strength work and get to chill out. Relaxing is fun, but it’s something triathletes rarely get to do. They finish their swim, hop on their bike, ride for four hours and then close out the day with a run. Honestly, triathletes must have so little free time. It’s a miracle they get anything else done in their lives.

Our sprints are actually sprints

In running, a sprint actually means athletes are sprinting. We’re talking 100m and  200m races that are done in 10 to 20 seconds. In triathlon, a sprint takes even the fastest athletes close to an hour. What’s with that? Triathlon “sprinters” swim 750m, bike 20K and run 5K.

If you want, you can certainly spend a lot of money on running gear, but you don’t have to. As long as you have a good pair of shoes, you’re set. In triathlon, though, you need a wetsuit, a tri-suit, a bike, a helmet, bike shoes, running shoes and so much more.

The marathon is hard enough

Running 42.2K is no joke, and it’s a challenge that can defeat even the best of athletes. So we have to ask: why on Earth would you make that harder by swimming 3.8K and biking 180K before hitting the marathon course? It just sounds so painful.

As runners, we sometimes have to get up for early runs, but that doesn’t compare to morning swim sessions. Swimmers arrive at the pool when it’s dark outside and the sun still hasn’t risen when they leave. At least we get to see the sun rise when we run in the morning.

RELATED: A German athlete’s 40,000K triathlon around the world

Aero this, aero that

Aerodynamics are of course important in any race, but runners don’t obsess about this like triathletes do. Some of us shave our legs, but if we don’t it’s not the end of the world. We might wear half-tights or split-shorts, but either works. If you don’t shave your legs as a triathlete or if you show up to a race in anything other than skin-tight spandex, you’ll hear about it from your fellow racers.

This is no “chicken or the egg” situation. We know what came first: running. Without running, triathlon wouldn’t exist. If triathlon had never been invented, though, running would be fine.