This year has been extremely exciting in Canadian running. Our women are truly on fire, and it’s obvious if you take a look at the record board from eight months ago and compare it to now. 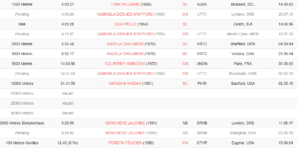 Gabriela DeBues-Stafford is single-handedly responsible for nearly 50 per cent of these new records, but she certainly isn’t the only Canadian woman who’s having an amazing 2019. Heading into an Olympic year, this generation of female runners is exciting for Canada. It’s been a long time since this many women have been collectively shattering Canadian records and producing consistent international results. Here’s a look at the 12 records that have fallen and the women behind the new marks.

Westaway had a killer indoor season, first running a new Canadian 1,000m record (2:37.04) before becoming the first Canadian woman to run under 2:00.00 over 800m indoors (1:59.87). Westaway is from Calgary, but is currently living in Guelph and training under coach Dave Scott-Thomas.

Lalonde opened her 2019 outdoor reason with a Canadian record in the 3,000m steeplechase at the Shanghai Diamond League in 9:29.82. Lalonde is coming off of a great winter season, where she finished in the top 20 at the world cross-country championships in Aarhus, Denmark. Lalonde was the first North American woman across the line ahead of huge track and field names like World Championship silver medallist and American steeplechase record-holder Courtney Frerichs. She was the highest Canadian female finisher at a World Cross-Country event since 2004.

O’Connell is the newly crowned Canadian 5,000m champion and her killer outdoor season was preceded by a great indoor season. She ran an indoor 3,000m record of  8:46.50 at the Armory Track and Field Center in New York.