As a dog, I thought you might also be interested in hearing a canine perspective on running with my human.  Not to boast, but I’m a more serious runner than he is, and I think my story deserves to be told. 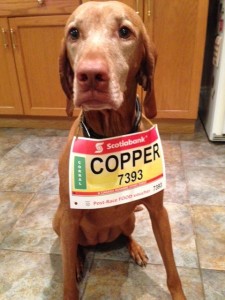 Briefly, I’m a seven-year-old Vizsla (we are, supposedly, the second fastest breed of dog) and I’ve been running for two years, since coming to live with my human. He has been running for almost twenty years and was very excited to discover I’m the ideal running companion.

Over the past year, with his assistance, I’ve developed quite the track record. As you see, I have my own email address my own Twitter feed, Facebook page and am building a robust professional circle on LinkedIn. 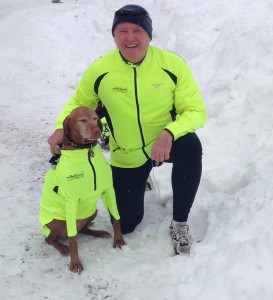 When it comes to running, I’m no slouch. I joined my human’s running group at The Runners Shop, and am a Sunday morning regular with the group. I also run with a smaller group which includes Margaret Webb, author of “Older, Faster, Stronger,” on Tuesday mornings for a 15K run along the Don Valley and Cherry Beach in Toronto. I really enjoy running with the group. When we arrive on Sunday mornings, I am a most enthusiastic participant.

I’m currently training for my first marathon and have been looking hard (with my human’s help) for a marathon which will actually permit me to run. Most have’no dogs’ rules in. I have had great support from my running buddies – a number of them wrote to a marathon organizer to support my request for an exception to the ‘no animals’ rule.

It’s not a big jump for me to run a marathon: I have a pretty impressive race record. I won “first place” for dogs in Blair’s Run, our local Cabbagetown race, last September. I also “medalled” in the Shamrocks and Sneakers St. Patrick’s Day race. I was an official entrant in the race (and, fortunately, the police on duty did not enforce the ‘on leash’ rule), and was a bit surprised to get an email the day after the race to inform me I had come first in my age category, and to come in to pick up my prize! It was a bit embarrassing to have to email back to say that I was actually a dog and didn’t have a lot of use for a Starbucks gift basket. 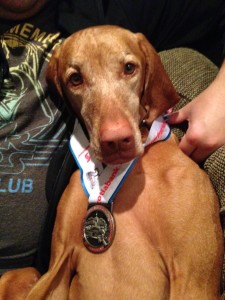 I’ve been entered and run the Pride and Remembrance 5K for the past two years. I was nosed out of top dog in the Balanse Bum 5K by another Vizsla, but I tend to be gracious about these things. I also ran the Terroir Run in Prince Edward County – was beaten by a couple of much smaller dogs in that run.