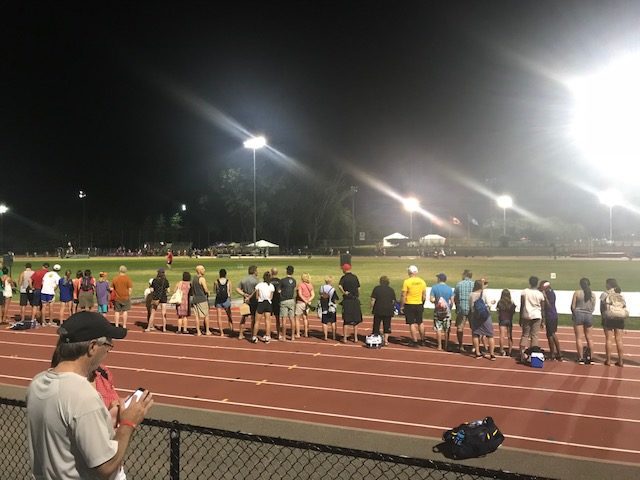 On Thursday I watched the Canadian Track and Field Championships 5,000m final with Ben Flanagan’s dad, Ron. Ron Flanagan and I watched as Ben, fresh of off an NCAA win, ran a gutsy race to place third in the country.

Ron was so enthusiastic about his son’s racing. As a runner myself, I’ve been on the other side of this scenario many times. I would drive with my parents to a race and they’d drop me off. After being dropped off, I would usually forget about my parents’ role in the rest of the process. I was focused on performing, not on how my parents were feeling.

Thursday’s race reminded me that being a spectator is one of the most nerve-racking and helpless positions a person can be in. And I don’t think this is unique to running. Watching loved ones compete, at anything, is difficult for the spectator. As an onlooker you feel all the emotions as though you were competing yourself, but you can’t do anything to change the outcome. All you can do is watch.

Running is not an individual sport, and the Flanagan’s are a great example of that. Ron told me that during the NCAA 10,000m final, Ben looked up at his family and gave them the nod. Ben said, “This year I started sort of checking in with my family during the race. I’d look at them and give them an indication of how things were going. At NCAA’s, when things were starting to heat up, I let them know I was feeling good. I did the same thing last week at Canadian nationals.”

Spectating with Ron served as a good example for me–you’re not alone when you’re doing something difficult. Ron wasn’t running the race, but he was supporting Ben the entire time.

As Ben ran the final 100 metres, Ron and I cheered and watched him finish. When Ben crossed the line, Ron darted away from the crowd to go find his son. When I found Ron at the finish line, he and Ben were waving at each other and throwing their hands up in celebration. Success is best when shared, and the Flanagans’ relationship is a great reminder of that.