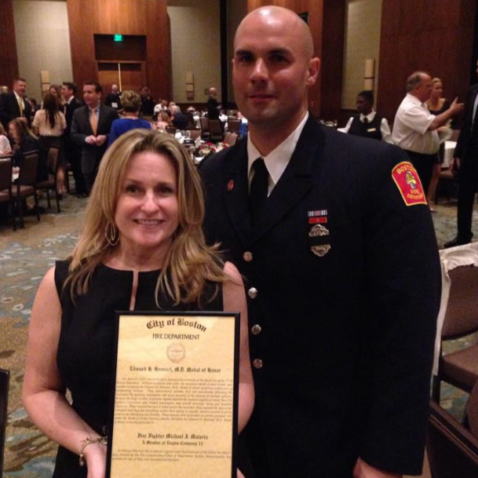 When Roseann Sdoia woke up on the morning of April 15, 2013, she had no idea what was in store.

Sdoia headed to the course of North America’s most prestigious road races– the Boston Marathon– to cheer on the runners who worked hard to run the 42.2K route.

She was standing close to the finish line when the explosions went off. She was one of the many unfortunate ones who not only witnessed the terrorism that occurred on the streets of Boston that day, but also wound up injured.

The bomb caused her serious injuries to her right leg. It resulted in an amputation.

There is however a silver lining to this Boston survivor’s story. To her rescue in April 2013 was firefighter Mike Materia. Materia was the one who came to help Sdoia and according to the Associated Press, he stayed by her side on the way to the hospital that day.

When she was in the hospital being treated for her injuries, he often came to visit her in her intensive care unit. It was actually her mother who tried to play wing-man to set the pair up soon after the incident occured.

“She was like, “Oh, did you see that firefighter? He’s so cute.’ And I was like, ‘Mom, I just got blown up.’ ” she said in an interview with the New York Post.

Two months after the bombings, Sdoia and Materia went on their first date. Now, they have plans to be married in the fall. They got engaged on a recent trip to Nantucket in December.

Sdoi is proving her resilience though. She has survived the Boston bombings and just took part in the Empire State Building climb up 1,576 stairs.

The other piece of god news: the couple will soon release a book. Perfect Strangers details the stories of four people affected by the Boston 2013 attack. It comes out next month.