Iain Mickle of Sacramento, who turned 59 three days before this year’s California International Marathon on December 8, finished in an impressive 2:42:57. Even more impressive is that the first time he ran a sub-3 was a staggering 42 years, 151 days previously, when he was a junior in high school. That’s a world record–for the longest elapsed time between two sub-3 marathon finishes, according to the Association of Road Racing Statisticians. 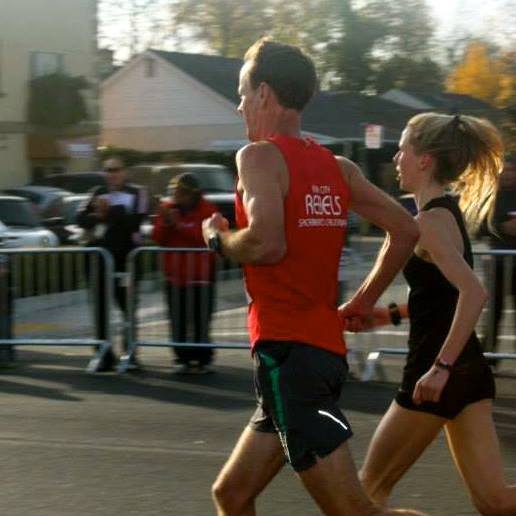 According to 1968 Boston Marathon champion Amby Burfoot’s entertaining story in Podium Runner, Mickle’s first sub-3 was at the San Francisco Marathon in July 1977, where he finished in about 2:50, 10 minutes ahead of his father, who ran the same race. It was also Mickle’s first marathon.

But Mickle didn’t run competitively very much for the next several years, so he doesn’t earn any kudos for sub-3 finishes across multiple decades or anything like that. Still, his comeback, which started about 10 years ago, is impressive. He ran a PB of 2:38 at the 2014 Boston Marathon, and was #3 on the list of longest time elapsed between sub-3s, with 40 years, 146 days between sub-3s, before CIM put him on top.

this moment. the tears and celebrations of a shared finish. dream bigger together. #CIM #OTQ #womensrunning

Mickle’s record could be in danger, though. He took it from Antonio Arreola, 60, who is hoping to take it back again at Houston on January 19. If Arreola does go sub-3 in January, he will have sub-3 finishes spanning 43 years and 45 days, and it would also make him one of the first runners in history to achieve sub-3 finishes spanning six decades.

Arreola’s last marathon was last year’s CIM, where he ran 2:54:48. Since then he has been dealing with non-Hodgkin’s lymphoma, but managed to race two half-marathons this fall, finishing both in 1:22 high. Arreola set his PB of 2:46:17 in 2001.