In what was perhaps the most anticipated race of the 2021 outdoor track season, Chris Chavez and Malcolm Gladwell went head-to-head in the open mile at the NYC Qualifier, the final event of the Trials of Miles series by Citius Mag on Friday night. Chavez went in as the favourite, but Gladwell proved experience trumps youth, as he left his younger competitor in his dust in the ultimate David and Goliath match-up.

Chavez took the race out hard, leading Gladwell for the majority of the run. Prior to the race, Gladwell said his plan was to sit on the back of the pack (he claimed he was “too old” to go out with the leaders) and try to have a strong finish, which is precisely what he did. With just 300 metres to go, 57-year-old Gladwell kicked past 27-year-old Chavez, charging to the finish in 5:15.38, with Chavez trailing behind in 5:23.36. 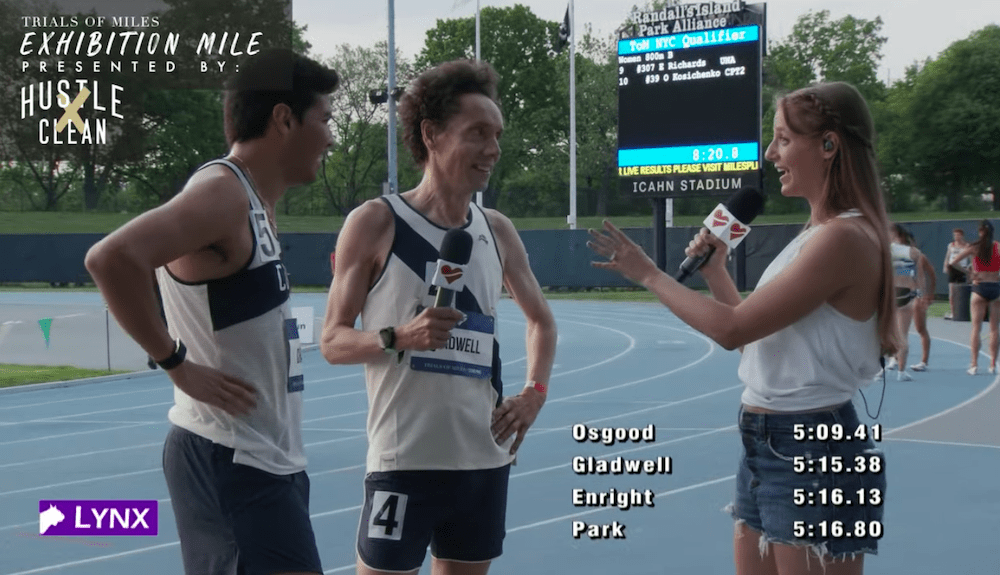 The result surprised many running fans who’ve been following the pre-race back-and-forth on Twitter, since Chavez owns the faster mile PB — 5:09, compared with Gladwell’s most recent time of 5:11. In a post-race interview, Chavez admitted he went out too hard, planning to do his first couple laps in 76 seconds each, but when the final bell lap sounded, Gladwell had an extra gear and Chavez didn’t.

“I’d like to exercise my rematch clause at some point,” said Chavez.

When asked if he felt bad when he realized he was leaving Chavez in his dust, Gladwell didn’t hesitate: “No — none.”

“I’m old enough to be his grandfather, I deserve every break I get,” said Gladwell.

Chavez was very gracious in his loss, admitting that this time, experience won out over youth. Both men were happy to be back on a track after such a long absence, and the running world will be eagerly awaiting their re-match.

The mixed-gender race, which was held at Manhattan’s Icahn Stadium, was won by Izzie Seidel in 4:54.67.