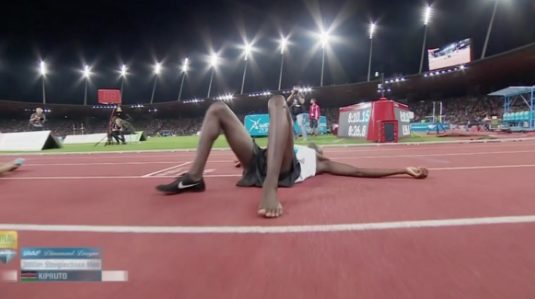 Despite having only one shoe, Kipruto inched past Soufiane El Bakkali of Morocco with gritted teeth in a drama-filled 3,000m steeplechase at the Diamond League final in Zurich. In the process he robbed El Bakkali of a $50,000 payday. Kipruto’s time was 8:10.15, El Bakkali’s 8:10.19. (El Bakkali has a 7:58 PB.)

Kipruto’s shoe came off only one minute and 30 seconds into the race. He ran roughly 2,500m with one shoe.

Sasha Gollish lost the back of her left shoe at the 2015 Pan Am Games held in Toronto. In front of a home crowd, Gollish managed to finish third in the 1,500m. She jokes that that was one of her grittiest moments in track and field.


Cam Levins nearly broke the Canadian indoor 3,000m record in one shoe. He finished one second short of the record in 2014. Levins is the former Canadian 10,000m record holder. The record is now held by Mohammed Ahmed, who also holds the 5,000m and 3,000m outdoor records.

Justyn Knight was clipped in the first lap of the 2015 ACC 1,500m final. He ran the next two laps with one shoe on and one shoe off, before kicking it off entirely heading into the bell lap. Knight ended up winning the race by 0.06 of a second.

Jenny Simpson lost her shoe in the 2015 world championships 1,500m final. After some aggressive jostling, Simpson lost half of her shoe. With 600 metres to go, she too kicked it off entirely, and finished the race. She placed 11th.


Many athletes will attest to the fact that the pain is bearable during the event, but it’s an issue of how injured a runner can become as a result of running without a shoe. Simpson reportedly said, “It’s an issue for training. You can’t keep running on a foot that doesn’t have skin.” She continued, “There’s no way I wasn’t going to finish.”

It was hard and painful to run without another shoe, but I just had strong spirit to never give up,the crowd was amazing and I keep going to the winning. https://t.co/MFv1tTbuLv

Kipruto too mentioned how beat-up his foot was post-race. He reportedly said, “I have a big pain. I am injured because I lost my left shoe. That was a mess.”