Running a 10K while carrying 100 pounds may not strike you as an ordinary thing to do, and it’s certainly not something you would want to have to repeat. Which is why Ottawa obstacle racer and personal trainer Morgan Mckay, 30, went to great lengths to dot every i and cross every t in her quest to capture the Guinness World Record for this task at Tamarack Race Weekend just past.

On the other hand, Mckay is no ordinary athlete. Last year she won the Spartan Ultra World Championship in Iceland, a 24-hour sufferfest of gruelling obstacles, extreme weather and unforgiving terrain. You can read about it here.

“I always wanted a Guinness World Record,” says Mckay, who is employed as a personal trainer at GoodLife Fitness (the Carp Road location in Stittsville). “I just think it’s cool.” She scrolled through all the fitness-related records on the Guinness site until she found one she thought might work for her.

“I found a record for the fastest male running a 10K while carrying 100 pounds, running cross-country,” she says. There was no corresponding female record, for either a cross-country or a road course.

The next task was to find a 10K that was IAAF Gold Label designated (which the Guinness organization requires). She emailed several races in the Ottawa area, but only the Tamarack Race Weekend 10K was certified. Mckay was familiar with the event, having run the full marathon four years ago, so she signed up and started training.

Guinness specified that the 10K must be completed in under three-and-a-half hours. But Mckay wanted to beat 1:53, the record set by the man running cross-country.

A friend of a friend lent her a military backpack with a steel frame, to which she attached (with duct tape) three round 25-lb. plates, a 10-lb. plate, a 5-lb. plate (all borrowed from her gym) and some of her race medals, to make up the 100 pounds without going an ounce over (for obvious reasons). 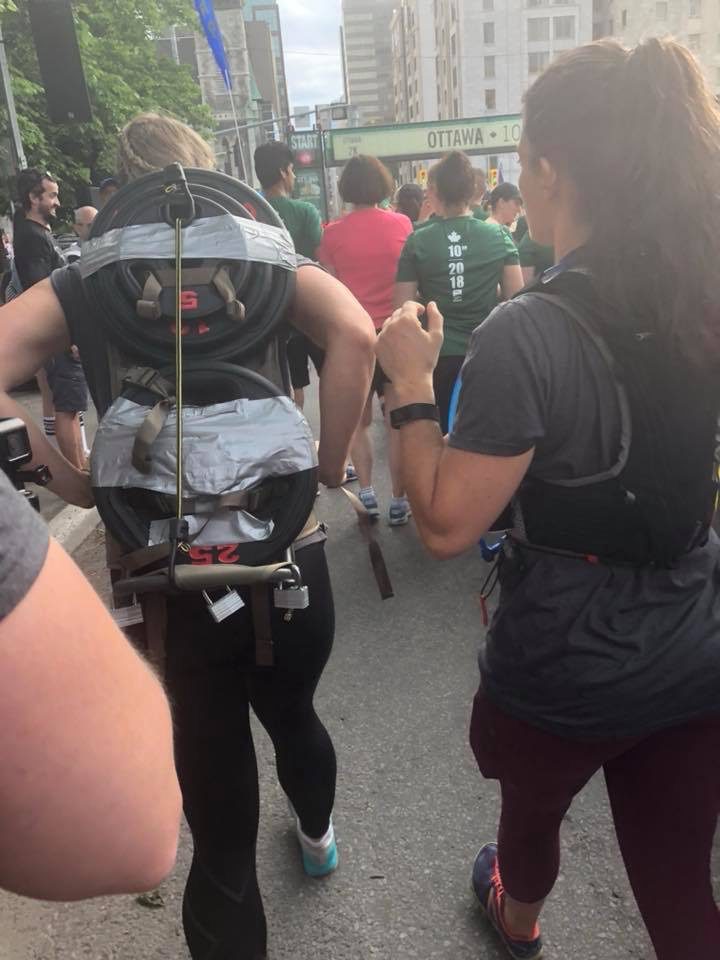 Mckay filmed the packing process, and had several friends run with her, filming the entire race. “One of my friends ran the whole distance and filmed me using a selfie stick, and another friend had two cameras mounted on a tactical vest,” she says.

When asked about what it was like to actually run 10K with the extremely heavy pack on her back, Mckay says, “The weight felt terrible, but it was so cool to have all my friends there supporting me, and all the runners passing me, asking what I was doing and encouraging me.”

At the finish line, they weighed the backpack again (and filmed it), to prove that nothing had fallen out or been lost along the way.

“I did find it very discouraging to be passed by so many runners,” Mckay admits. “And I took the pack off as soon as I crossed the finish line.” Her shoulders were very sore, and she waited til Sunday morning to celebrate, going out for breakfast with her boyfriend. But she was elated at having achieved her goal and successfully set the record.

Mckay will submit the footage to the Guinness organization today, along with two witness reports from friends who vouched for the attempt’s authenticity. Normally a record verification takes 12 weeks, but Mckay plans to pay the $600 fee to reduce the waiting time to five days. She’s confident her record will be ratified. “We read the guidelines 100 times,” she says. “There’s no way I was taking any chances.”