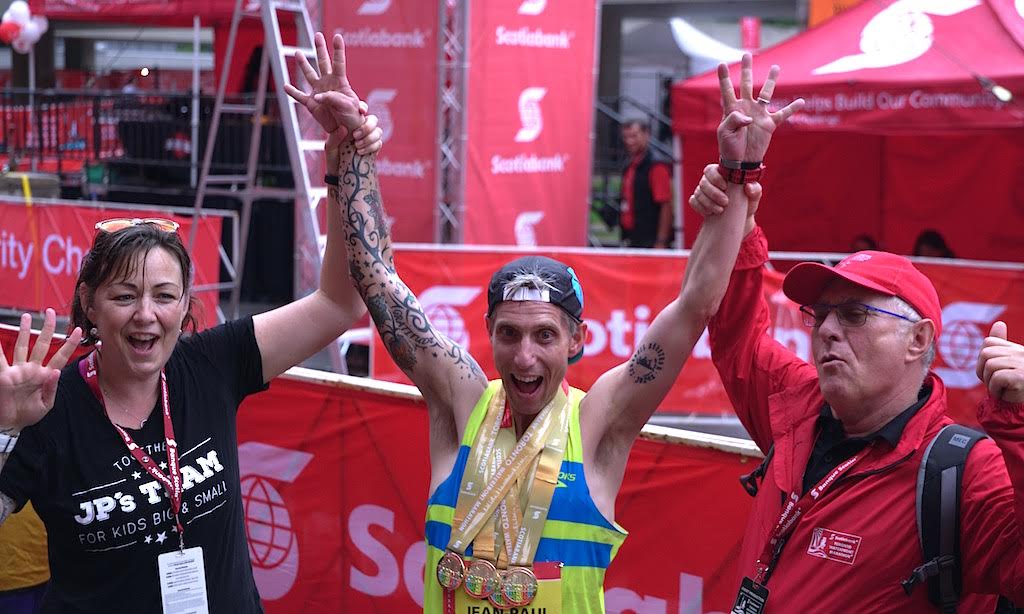 It has been a long 21 hours for Toronto runner J.P. Bedard.

While most runners would consider one marathon tough enough, Bedard weathered the course of the Scotiabank Toronto Waterfront Marathon four times in order to better the lives of survivors of sexual abuse.

A survivor of sexual assault himself, Bedard took to the streets of Toronto on Sunday keeping in mind others who have suffered the same abuses that he has. Bedard was abused as a child by a hockey coach who later skipped town. Later, he was raped in a ravine and remained silent for years. It led to a drug and alcohol addiction.

In his 40s though, Bedard broke the silence and now he runs for others who carry this burden.

Today, he says that thinking about these people kept him going in this 168.8-kilometre challenge. And now, he’s done the quadruple marathon having contributed to two charities: the Gatehouse (located in Toronto) and Little Warriors (an Edmonton-based charity). Both organizations work with children who have been abused.

“The whole time, I was thinking about survivors of childhood sexual abuse, all the people on J.P.’S team and all the people around the world who sent me messages saying that I was running for them,” he said in his post-race interview.

“I feel really passionate about runners who aren’t elite runners but have incredible stories about why they’re running,” he said.

This isn’t the first time that we’ve seen J.P. Bedard run ultra distances to support those who have similar pasts to his own. Last year, he showed up in Toronto and ran the marathon three times to let his cause be known.

It was this demonstration that led us to name him Runner of the Year last year.

Going forward, he says he’d like to expand his group of supporters to make this a cross-country running initiative.