One of the things Justyn Knight did on a recent and rare visit home to Toronto was to help launch the Athlete to Student Athlete part of a mentorship program at his high school, St. Michael’s College School. Current students and aspiring athletes got to hear him talk about his experience of attending university in the U.S., competing in the NCAA and launching a professional running career.


Knight spoke to about 50 current SMCS students about how he became an athlete, and the ways he has worked to excel as both an athlete and student since then. After becoming the first SMCS athlete to win OFSAA gold in cross-country in 2013, Knight attended the University of Syracuse on a track scholarship, earned three NCAA DI titles and graduated last year with a degree in social work. Earlier this year he turned pro, joining the new Reebok Boston Running Club in Charlottesville, Va. He earned top-10 finishes in the 5,000m at the World Championships in both 2017 and 2019.

“Make sure you balance academics and athletics because you never know what your future might hold.”
Learn more about the mentorship programme Justyn Knight ’14 helped launch earlier this year.https://t.co/TitS2OpFP6#smcsimpact #teachmeGDK pic.twitter.com/rH9142WXKj

Knight had always played basketball, but says it was his grade 10 gym teacher who discovered his running talent. Knight had always excelled at gym, but worked particularly hard at his running that year, to bring his mark up. He says it never occurred to him that he might be good enough to go to an American university on a track scholarship, until he was. He credits his parents and his brother with supporting him and guiding him as he grew into a successful student-athlete and now pro runner.

Considering Knight’s degree is in social work, mentoring young athletes seems like not just a way to give back to the school that nurtured his talent in the early days, but also a natural fit with his academic and career interests. 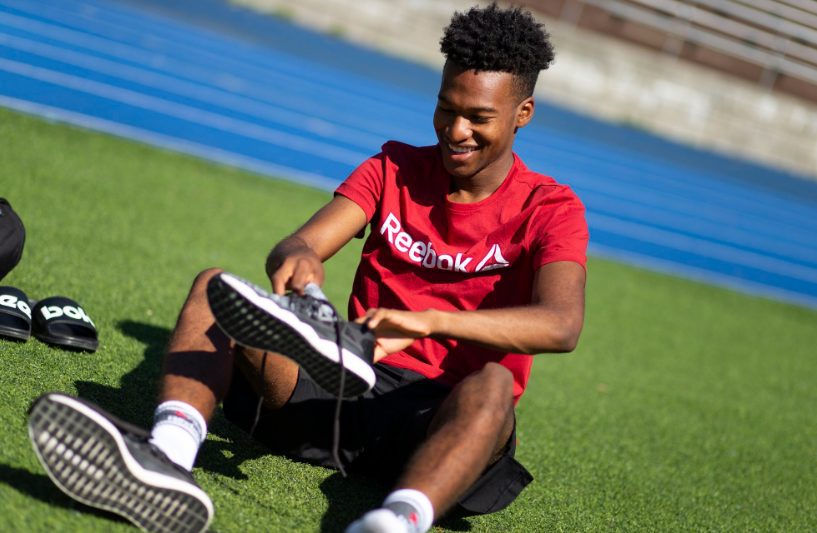 Knight’s advice to current students was to work hard, even when they think nobody’s looking, and not to neglect their academic studies. One of the reasons he chose Syracuse, he says, was that he wanted to go to a school that was as well respected for its academics as its sports programs.

Knight says he’d be lying if denied that he’s hoping to win an Olympic medal in 2020. “You get to a certain point, you are a professional athlete and if you are not striving to win, you are not competitive enough,” he told the school in an interview. As one of Canada’s most competitive athletes, he’ll have a lot of fan support heading into the training cycle for Tokyo 2020.